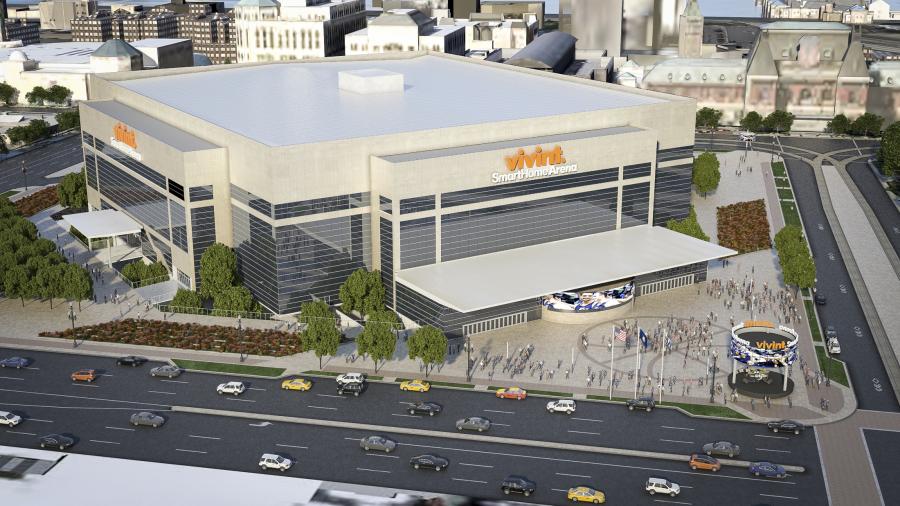 Vivint Smart Home Arena, a premier sports and entertainment venue of the Intermountain West located in downtown Salt Lake City, Utah, will be transformed as the result of a $125 million renovation. The majority of the construction will begin at the conclusion of the 2016-17 Utah Jazz basketball season with anticipated completion by fall 2017.

“The arena has been a community gathering place for the past 25 years, and this renovation reaffirms our family commitment to the Utah Jazz, Salt Lake City and the state of Utah,” said Gail Miller, owner and chairman of the Larry H. Miller Group of Companies. “The changes will benefit everyone who comes to the building for a sports event, concert or family show. We are pleased that the arena will once again serve as a first-class, state-of-the-art venue.”

A series of top-to-bottom upgrades on all six levels of Vivint Smart Home Arena will elevate the guest experience with redesigned lower and upper bowl concourses; vibrant social spots from private clubs/suites to open gathering spaces; more food choices with the installation of “live” kitchens; and a new 12,000-sq.-ft. (1,115 sq m) indoor lobby to welcome guests.

Utah-based Layton Construction Company will serve as the general contractor of the project. SCI Architects is the lead architectural firm with more than 100 sports related projects, including recent renovations at Madison Square Garden and The Forum in Los Angeles. ICON Venue Group is providing developmental, operational and project management support with a project portfolio in virtually every professional sports league.

“This project has all of the ingredients for success,” said Tim Romani, chief executive officer of ICON Venue Group. “From the ownership team that is genuinely committed to its community and fans, to the creative and inspired design team of SCI Architects, to the local and experienced Layton construction team, you couldn't assemble a better group to deliver a completely new experience for the fans of Salt Lake City. Unlike many renovation projects, the majority of the budget will go toward experiential things that the fan can see, touch and taste.”

“It has been clear from the outset that Vivint Smart Home Arena's bones are very good and form an ideal basis to create an unsurpassed 21st century NBA facility,” said Murray Beynon, principal of SCI Architects. “The creation of interactive social and viewing platforms along with an array of new fresh food options will transform the fan experience on all six levels. From the front row to the top, the guest experience will be improved for everyone.”

The plaza will feature an extended entryway that brings visitors inside for ticket and box office services. The indoor atrium will be the go-to meeting place with game-night entertainment and the Jazz Team Store. The plaza will feature a videoboard for outside watching parties. A new marquee features a covered stage with full-circle graphic capabilities.

Each corner of the main concourse will showcase the preparation of fresh food with areas devoted to gourmet hamburgers, hand-tossed pizzas, healthy choices such as salads, and Mexican food. Cooking stations installed throughout the arena will allow for “live” kitchens in the clubs and concession stands throughout the arena. The four upper corners of the arena will be opened up with casual gathering spaces where fans can watch the game.

All the individual suites on level four are being remodeled with exceptional sightlines and an array of first-class amenities. Larger suites are being added to host business and community groups for special event night experiences. Level two will house five themed club experiences for pregame dining and halftime socializing. Four unique floor suites also will be added where fans enter their box seats in the stands through a private portal and hospitality suite.

“Vivint Smart Home Arena is the story of an arena rising to meet the expectations of its guests as a top destination for sports and entertainment events,” said Jim Olson, president. “The arena renovation will be packed with amenities to create a world-class experience for our fans. There will be a new energy around the building, and I look forward to the re-opening of the arena next fall.”

• Full array of solar panels on the roof, produced by Vivint Solar and installed by Hunt Electric

• New chairback seats in the lower and upper bowls

Fans will be able to track the progress of the arena renovation project at www.vivintarena.com by clicking on the “Arena Rising” button.

Upgrades for this upcoming season include a new Larry H. Miller basketball court with a lighter-colored wood, new paint and refreshed graphics. Midcourt now features a 16-ft. (4.9 m) round navy, gold and green basketball. A J-note is displayed inside the three-point line on both ends of the court. A custom-designed video display system was installed in 2013 as part of a $15 million arena investment.

Vivint Home Smart Arena Located in downtown Salt Lake City, opened in 1991 as the homecourt of the NBA Utah Jazz and is well known for being one of the hardest places to play for visiting teams. With seating capacity of about 20,000, the facility is the largest, most high-tech arena within a five-state radius and was built faster than any other arena at the time of its construction in 15 months and 24 days.

The basketball court is named in honor of Larry H. Miller. Vivint Smart Home Arena is the site of a variety of sports and entertainment, including ice shows, dirt shows and concerts. The facility hosted the 1993 NBA All-Star Game, the 2002 Olympic Winter Games figure skating and short track speed skating competitions, and the NCAA men's basketball tournament.