The $6.2 million project was ushered in with celebrations that included a mariachi band and barbecue.

The $6.2 million Pajaro Neighborhood Park project, under construction at 24 San Juan Road in Parjaro, was officially ushered in by a groundbreaking ceremony in April.

Originally it was an equipment yard belonging to Granite Construction of Watsonville, Calif.

Now it is in the process of being turned into a community park in Parjaro, Calif., the first such amenity in the area.

The $6.2 million Pajaro Neighborhood Park project, under construction at 24 San Juan Road in Parjaro, was officially ushered in by a groundbreaking ceremony in April. The celebrations included a mariachi band and barbecue, and Graniterock, whose construction division is building the park, displayed one of its antique dump trucks at the site.

A collaborative effort involving Monterey County and local community organizations, residents and business leaders, the park is located on a 4.9 acre site. Designed by SSA Landscape Architects of Santa Cruz, Calif., features include a baseball and soccer field, a bandstand, a basketball and volleyball court, a running and walking track, and picnic areas. There also will be two play areas, one for children five to twelve years old and another for toddlers aged two to five.

“The property was originally conceived of as a low income housing offset for a property that Clint Eastwood was developing in Pebble Beach. Due to earthquake soils issues, housing was unacceptable,” said Steve Snodgrass, Graniterock chief financial officer. “Supervisor Lou Calcagno persuaded Granite Construction that it would be a good community service gesture to have the land donated to Monterey County as a park.

“Park funds were granted by the state of California to the Monterey County Redevelopment Agency and the park is being built in conjunction with the local community services district that will provide for the operations and maintenance. The project is being built with state funds, operations and maintenance funds are being donated by the community, and the YMCA will run park programs, which it is funding via grants.”

All but one of the old buildings that were on the site were demolished, according to Graniterock Project Manager and Team Member Ambryn McBride.

“Graniterock’s construction team is a civil construction company with very diverse abilities, which include doing all of the undergroun, earthwork/grading, and concrete work on site. Subcontractors are handling the electrical, irrigation/landscaping, fencing, artificial turf, striping and signs, pre-cast concrete walls, pre-fabricated restroom building, and playground equipment installation,” he added.

Construction began in March 2013. With approximately 10 team members on-site every day plus about three subcontractors’ employees about two days per week, it is anticipated the job will be completed in December 2013. Graniterock has constructed several parks in the past and is very active in that market when bidding on and building these types of facilities, according to the company.

“We have used John Deere 710 backhoes and 210LE skip loaders as well as a Caterpillar 613 scraper, 140H motorgrader, and 563 roller. We also use a small towable Sakai roller. We have done all of the underground and earthwork and are currently working on finish baserock grading and installation of concrete curb/gutter and sidewalk. We ran into buried debris [concrete and metal] on site and handled that work by removing the debris on extra work,” McBride said.

Granite Construction originally owned the property on which the park is being built but has transferred title to the county of Monterey.

However, Graniterock was awarded the contract and is carrying out the work.

Family-owned and operated Graniterock supplies materials to the construction industry, including ready-mix concrete, gravel, sand and rock, hot mix asphalt and landscaping supplies. Founded in 1900 and working in a six county wide region, it has branches located in San Francisco, San Jose, Felton, Redwood City, Santa Cruz, Cupertino, Monterey, Oakland and Salinas. Granite Construction was founded in 1922, becoming an independent entity in 1936. Working on a national basis, it shares the Watsonville headquarters with Graniterock.

The company has been recognized with numerous awards and honors, including the Malcolm Baldridge National Quality Award (1992), the Governor’s Golden State Quality Award (1994), and Quality in Construction Awards (2004 and 2010) and the Airport Quality in Construction Award (2010) from the National Asphalt Pavement Association, as well as appearing twice on Fortune Magazine’s list of 100 Best Companies To Work For. 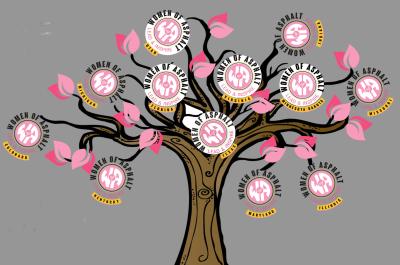