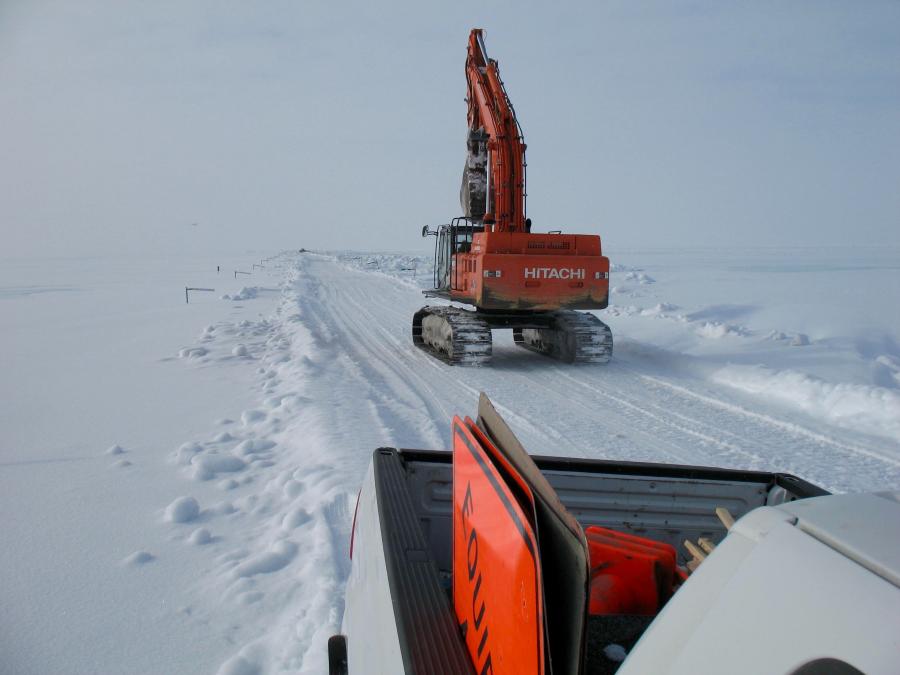 ADOT&PF photo. The Dalton Highway Reconstruction project in northern Alaska has undergone several modifications as a result of weather-related conditions.

The Dalton Highway Reconstruction project in northern Alaska has undergone several modifications as a result of weather-related conditions. Initially begun in 2015 with a $27 million construction contract awarded to Cruz Construction, the scope of the project encompassed reconstruction of the Dalton Highway from mi. post 401 to 414, with improvements that included raising the grade 7 ft. (2 m), replacing culverts and surfacing the gravel road. The project was soon extended south to mi. post 397 and the contract amount increased to $43 million to cover the additional roadway as well as repairs due to flooding.

Last year ice developed in the MP 395-405 area when unusually warm temperatures in the Brooks Range and surrounding foothills caused a record melt that resulted in unprecedented flooding on the Dalton Highway.

“River water was flowing,” recalled Meadow Bailey, Alaska Department of Transportation and Public Facilities. “It seeped through the ice and froze; there were several layers of ice and overflow near the road.”

Often, only one lane of traffic was open during construction, but the overflow led to a month-long complete road closure and $17 million in emergency repair. “It was a three-month crisis.”

Although crews typically don't work during the winter in northern Alaska, when they saw an emergence of ice and overflow water near the road, repeating last year's pattern, they knew they had to act.

“Usually, there's no work from October through May or June, but it can be driven by winter,” Bailey said. Last year, she said they were “very busy” during their 100-plus days of construction. This year, “we started in January,” she said.

Initially, they built snow berms and installed burlap fences. The burlap wicks up water and then freezes in place to form overflow ice barriers adjacent to the road. Eighteen workers used 16 pieces of equipment to construct the berms made of snow, burlap and rebar, with three state inspectors observing. High winds and poor visibility limited and even halted work in February, but eventually the 5-berm was completed.

To prevent the same thing from reoccurring this year, DOT staff and general contractor Cruz Construction dug and maintained 15 mi. (24 km) of trenches along the road to divert the water from the highway.

“They had huge excavators on the ice, digging through five inches of ice to open the main channel of the river,” Bailey explained.

It took four excavators to reestablish existing trenches and building new ones to divert water away from the road and toward the main channel of the Sag River.

After reviewing current overflow patterns and locations on the Dalton Highway, in order to further protect the road, they resorted to contingency plans to protect the road from the Sag River. Crews hauled gravel in double-bucket haulers in order to build a 5-ft. (1.5 m) gravel dike 3 mi. (4.8 km) long on the east side of the road to protect it from overflow from the Sag River between MP 394-397. At mi. 397, the berm connects with the raised roadway, which was constructed last summer.

There were challenges in getting the gravel to the jobsite.

“They were hauling it 40-70 miles,” Bailey estimated, adding that ADOT and the GC were developing pits closer to the site. The gravel will be used later in grading, but for now it's helping to keep the water flowing away from the road.

The efforts worked — the water has been diverted from the road. Satellite imagery indicates that the trenching effort did divert flowing water away from the highway. Fewer sections of flowing water are near the road.

“It's an ongoing effort,” Bailey noted. Crews continue to dig trenches to divert overflow near the highway back toward the main channel of the Sag River.

No water has topped the road this year, despite unseasonably warm temperatures in January and visible overflow adjacent to the highway. Monitoring continues by ADOT&PF, Alyeska Pipeline Service Company and the University of Alaska Fairbanks, with climate data provided by the National Oceanic and Atmospheric Administration, Bailey explained, adding that she believes they have done a better job of maintaining overflow this year.

Nevertheless, she added, they continue to be worried about break-up this year. “If there's a sudden thaw, there will be a lot of run-off.”

During the winter, local temperatures hovered in the -20 to -30 range, which reduced the amount of overflow visible from the road, but as early as February, temperatures were once again in the unseasonably warm range, with lows of -6 and highs above zero.

Fortunately, the overflow is minimal and does not threaten the road or traffic, due to the trenches, the berms and the fact that last summer the grade of the road was raised 8 to 10 ft. (2.4 to 3 m) from MP 397-405.

The project was broken into three segments of road to make it easier to construct and fund, Bailey explained. There are officially four projects from 2015-2019, with the final year consisting of paving work.

“Last summer we worked on mile 307-414, which we will complete in 2016. In 2015 we also started to raise the grade seven feet along mile 296-405,” Bailey said. Crews also finished the repair work and began to add culverts. “They are producing, mining and hauling gravel, and shaping the road.”

She pointed out that some of the two-lane gravel road will be paved, but some will remain gravel.

“We want to pave as much as possible, but some sections are pretty challenging and expansive. You can get better traction with gravel.”

The gravel currently used to mitigate overflow will be pulled up from the sides of the road to be used on the road surface.

Design work started “years ago,” Bailey continued, and has continued since the project began. “We redesigned the road; the road grade is taller — about 8-10 feet above the tundra.”

Insulation in roadbed to protect against the permafrost was removed. Culverts have been added as a method of diverting water from the roadway. The project area is in a basin 30 mi. (48 km) out of Atigun Pass. The road passes through a treacherous mountain pass, which drains snowmelt into the basin, in a remote yet vast area. A small community exists on the way to the oil fields, but there's not much else in this region.

“It's in an incredibly challenging geographical location — it's remote and unique,” Bailey summarized.

And yet, the Dalton Highway is considered vital infrastructure for the state.

“There's a sense of urgency on this project,” Bailey admitted. “Crews work long hours — and then go home.”

She said work is going “exceptionally well,” and barring any other weather crises, is expected to finish on time and on budget. Funding for the total $135 million budget comes from federal sources with a state match of 8 to 10 percent.