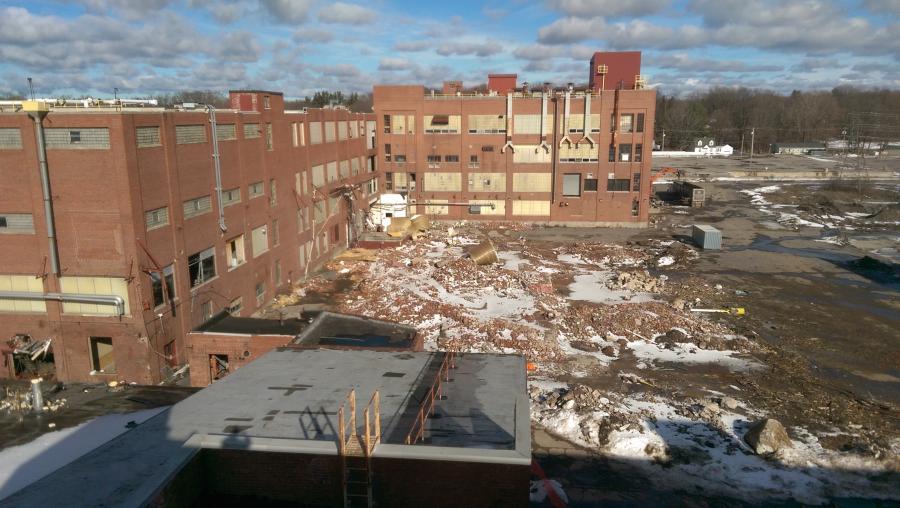 Mark Sherman photo. Crews must clear several buildings by June 1 to comply with the Aldi’s contract.

For more than 100 years, just before a rain, the scent of chocolate perfumed the air in Fulton, a small city in the western part of Oswego County, N.Y., 25 mi. (40.23 km) north of Syracuse. That's because it was home to the central New York plant that produced Nestlé chocolate products for more than a century.

But in 2003, the first U.S. chocolate manufacturing facility closed and the sweet aroma disappeared. Today, specialized crews are making sure that asbestos doesn't fill the air as they prepare to demolish the one-million-square-foot factory.

The first chocolate made in North America was produced in Fulton even before Fulton was incorporated. Henri Nestle originally opened the plant in 1900 to make condensed milk and baby food, said Fulton Mayor Ron Woodward. Due to plentiful availability of quality milk, he began making cheese as well. Chocolate production began in 1908.

Woodward said it was the region's cows, who produce milk rich in milkfat, that attracted the Swiss chemist who had developed a way to condense milk for infant food, but it may have been some of Fulton's leading citizens who actually lured the company by providing an incentive. In 1899 they raised $2,700 to purchase land on the south side of town for Nestlé to use.

Credited with the invention of milk chocolate, by 1919 Nestlé found it to be the most profitable product the company produced, the Mayor said. As production expanded, Fulton became the birthplace of Nestlé's Quik, the home of the Crunch Bar and the maker of Toll House morsels for chocolate-chip cookies.

Many Swiss skilled in the art of chocolate making, including Peter Cailer Kohler, settled in Fulton; some of their descendants still live in the area today. At its peak in the 1970s, Nestlé employed 1,700 workers. Its four-story factory was the tallest building in the area. It was a pivotal employer.

“Everyone in town had some connection,” said Woodward, who worked for the company for 17 years prior to his political career. “They were here for 103 years and paid good money. They paid a payroll of $22 million a year.”

“We lost Birdseye too,” Woodward said. “They went to Wisconsin because it's cheaper.”

That resulted in another 350 unemployed residents and a loss of $12 million paid in payroll.

It's not the first major manufacturing loss for the city once known as “Fulton, the City the Great Depression Missed” because there was so much work available, which led to a strong economy, according to a 1936 New York Sun headline. The industrial nature of the small city named for Robert Fulton, inventor of the steamboat, led to a very stable workforce for many years. Mills, factories and plants lined the banks of the Oswego River, which flows north to Lake Ontario.

But a large woolen mill closed in 1952, putting 1,500 out of work. Paper plants closed. The gun works closed. Miller Brewing closed a plant about a decade ago. The bottle factory and the can factory followed suit. Manufacturing jobs dried up.

There are jobs still available. The New York Department of Labor indicates that employment in Oswego County doubled between 1975 and 2000. However, most of the new jobs are service jobs that pay half what manufacturing jobs pay, and many are on the outskirts of town or in other cities, such as an expanding mall in Syracuse, not in downtown Fulton like the Nestlé factory.

The chocolate factory had been struggling for years. The last time it hired a production worker was 1984 — due in part to the longevity of its workers, whose average tenure was 27 years, but also because of costs. The workforce slowly dwindled from a high of 1,700 in the 1970s to the 450 laid off in 2003.

Since 1991, claims the New York Times, the city and other government agencies have offered Nestlé assistance worth more than $73 million, including selling tax-exempt bonds for an energy plant and cutting the property tax assessment by more than one-third.

None of the efforts was successful. The company closed the factory, citing cost-prohibitive necessary restorations and updates.

Instead, Nestlé shifted some production to a newer plant in Wisconsin, sent the Crunch branch to Brazil and sold its bulk chocolate business to Cargill, which moved it to an existing facility in Pennsylvania, said Patricia Bowles, a spokeswoman for Nestlé USA, the American arm of the Swiss firm, which is based in Glendale, Calif.

It then put the Fulton plant on the market, priced at $3.5 million.

Local officials immediately attempted to interest other chocolate companies in the facility. Investors from Ivory Coast purchased the chocolate factory and attempted to reopen it as “New York Chocolate and Confections Company,” but the company was never able to produce more than a few test batches for public relations purposes and it became mired in internal fighting and lawsuits. It filed for bankruptcy.

On June 30, 2010, the plant and its assets were sold. Oswego County Today reported that GoIndustry DoveBid, a leading provider of asset management services (a company that specializes in selling off the parts of the companies it acquires), made a winning bid in U.S. Bankruptcy Court in Syracuse of $2.5 million for the nearly century-old former Nestlé factory on the city's southeast side.

The county's economic development arm, Operation Oswego County, came in second with a bid of $1 million. The agency tried to convince another chocolate or confections company to buy the factory and its equipment, some of which was new, installed by the Ivory Coast company that failed to get up and running in the plant, but failed in that attempt too.

All hope of a sweet future ended when the city of Fulton seized the 24-acre site along state Route 481 for back taxes last year.

While concerns about attracting and retaining major companies like Nestlé, which invested more than $50 million in the city over its last decade, were reflected in a New York Times article, Woodward said Aldi's has already contracted to build a supermarket on two acres of the site and “others are interested.”

He said the former manufacturing site will now be retail, although there are rumors of a warehouse and a truck rental company looking at the property, which is near a four-lane highway.

First, crews must clear several buildings by June 1 to comply with the Aldi's contract. Prior to demolition, however, crews are conducting asbestos abatement.

“It's a big issue,” Woodward said, explaining that it's not only a requirement to remove the asbestos, but with tipping fees of $110/ton, it's also financially imperative to reduce the amount of materials sent to the dump.

Not all materials are slated for the landfill; some are being reused on site.

“All of the bricks have to be crushed,” Woodward indicated. Because the site will need a lot of fill, he said the contractor plans to crush the bricks from the buildings in a crusher to a consistency like gravel and reuse the material on site.

The job requires three different contractors, the Mayor indicated. The contractor overseeing asbestos removal and air monitoring is the same one who will be doing the demolition, which Woodward hopes will begin sometime in March.

He revealed a unique relationship between the general contractor and the city.

“We're not paying to take down the buildings. The contractor owns the site.”

To recoup his investment, the general contractor will sell anything of value, such as scrap metal. These buildings were made of heavy structural steel, Woodward noted.

The city still owns the land, but Woodward is eager to sell it to developers.

“We want it all back on the tax roll.”

Whoever buys and develops the former chocolate factory, the Mayor hopes they will acknowledge its sweet history by incorporating the Nestlé name in some way.