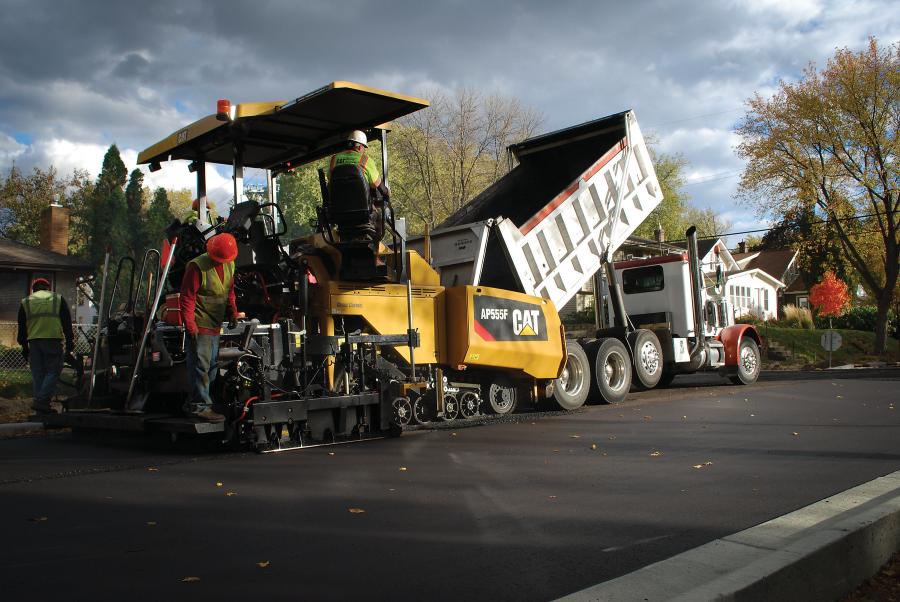 An integrated generator powers a new screed-heating system, further reducing fuel consumption. The Caterpillar-exclusive generator used in the AP500F and AP555F pavers was developed by the same team that designed and engineered the Cat D7E electric-drive dozer.

The generator connects directly to the engine and combines with the heat-distribution system of the SE50-Series screeds to bring the screed to proper temperature in approximately 15 minutes, compared with the previous 30-45 minutes. The engine runs at 1,300 rpm while the screed is heating, compared with the typical speed of 2,200 rpm, saving fuel and reducing sound levels.

Diagnostics for the screed-heating system are designed to minimize paving interruptions if a screed temperature-sensor malfunctions by automatically adjusting the system to maintain consistent heat.

New touchscreen displays for the AP500F and AP555F models provide increased flexibility when operating and adjusting the machine. The high-visibility color displays incorporate user-friendly options that allow accessing controls for new technology through the touchscreen.

For crew convenience, the most frequently used functions are controlled by switches, such as the new single-switch control for the auto-fill feeder system, simplifying setup and helping operators with varied experience and skill levels to attain consistent results. The auto-fill switch allows the feeder system to alternate between auger and conveyor operation, helping operators establish a proper, initial head of material.

For enhanced operating flexibility, ratio control for the conveyors, as well as mix-height adjustment, can be controlled from both the screed and the operator's platform. An available pendant control enables the screed operator to stand alongside the machine during operation.

Propel and feeder-system settings transfer between operating stations via a single switch, and speed, as well as operation and travel modes, are automatically adjusted at both stations. The operator also can make various screed adjustments without leaving the seat. Cat Grade Control also now can be operated from the tractor consoles.

The Mobil-Trac undercarriage is designed to combine the traction and flotation of a track paver with the speed and mobility of wheel pavers. The system's oscillating bogie sets assist the track in maintaining contact with irregular surfaces and also minimize grade deviations and tow-point movement, resulting in smoother paving results.

Screed extensions have two-speed proportional control for fast as well as precise control near obstacles. A pendant control adjusts the height of optional hydraulic end-gates, as well as extender width and tow-point height.

Screed-plate life is extended with proprietary, abrasion-resistant steel, and a machined screed frame facilitates installation of plates, which bolt flat to the frame.