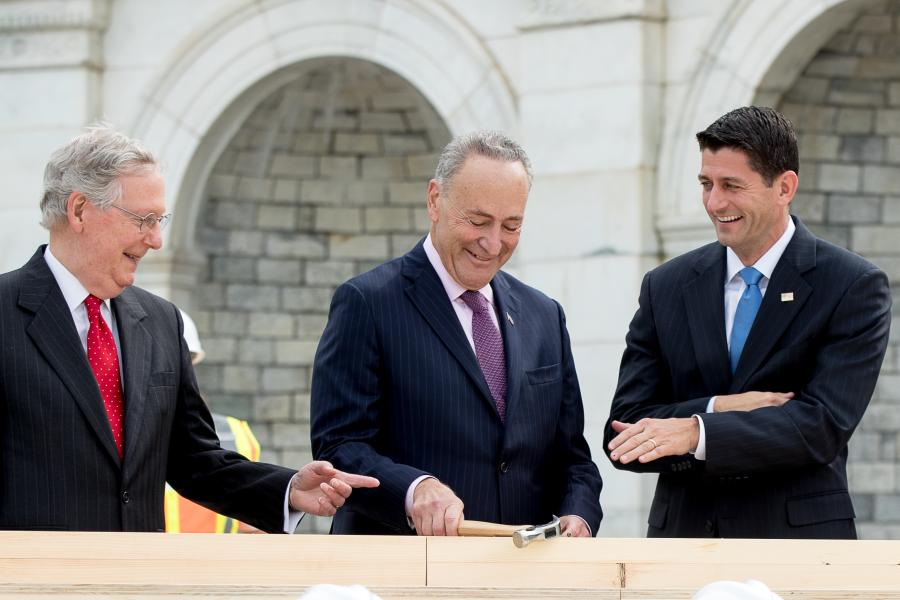 AP Photo/Andrew Harnik). House Speaker Paul Ryan of Wis., right, and Senate Majority Leader Mitch McConnell of Ky., left, laugh at Sen. Charles Schumer, D-N.Y., center, bends his nail during a ceremony to drive in the first nails to signifying the start of construction on the presidential inauguration platform,

WASHINGTON (AP) - U.S. Capitol workers have started to build the presidential inauguration platform, with an assist from congressional leaders.

Republican and Democratic leaders hammered in the ceremonial first nails for the structure where the next president will take the oath of office on Jan. 20.

Some of the lawmakers were more successful than others at the task. House Speaker Paul Ryan hammered in his nail quickly, while Sen. Charles Schumer of New York, No. 3 Democrat in the Senate, took several tries and bent his nail. After some good-natured ribbing, Ryan returned and hammered it in.

Sen. Roy Blunt, R-Mo., the chairman of the Joint Congressional Committee on Inaugural Ceremonies, said the inauguration matters all over the world because it symbolizes a peaceful transition of government.

The platform will be built on the West front of the Capitol, a tradition started with President Ronald Reagan. Before Reagan was president, inaugurations took place on the East front. Holding the ceremony on the West front allows for more spectators, as people can watch the event from the National Mall.

Building the 10,000 square-foot platform from scratch is a major job. Trees have to be uprooted, a fountain has to be temporarily filled in and even some marble has to be removed to allow the new president, lawmakers, justices and other guests- 1,600 people in all - to fit on the stage. Bleachers built above the platform will hold 1,000 more people.

Five American flags are hung between columns on the face of the Capitol just below the dome. One is the current flag, two have 13 stars for the original colonies, and two have as many stars as there were states when the president's home state was admitted to the Union. Because New York is the home state for both Democrat Hillary Clinton and Republican Donald Trump, the flags have already been ordered, according to the Architect of the Capitol's office.