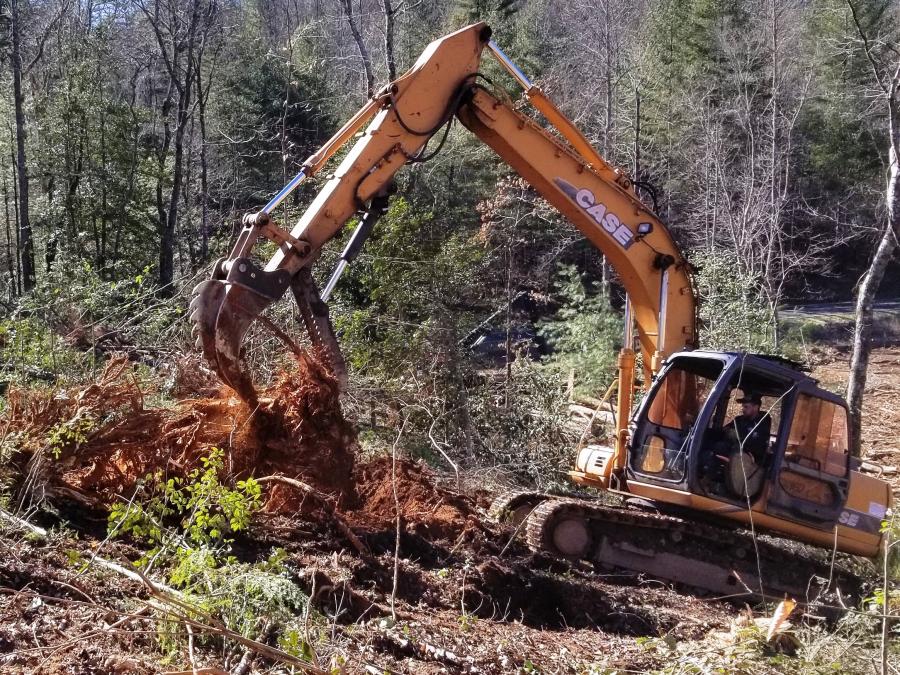 Thompson Brothers once focused on cleaning up and grading timbered sites in the rugged Appalachian Mountains near the border of North Carolina and Tennessee. The small, family-owned company expanded into harvesting timber with mechanical equipment in 2010 to weather the recession.

When Thompson Brothers clears a site, it cuts and extracts valuable timber and disposes of stumps and brush. The contractor cannot justify the cost of processing lumber on site with a tub grinder so it burns piles on site instead. Thompson Brothers recognized that reducing the size of the stumps was key to accelerating the process and the Shark Tooth proved an ideal fit for ripping out and shearing stumps into pieces.

“We were extracting stumps with the excavator bucket,” recalled Brian Thompson, who co-owns the company with his brother Brandon. “That left big holes and it took a tremendous amount of time to burn.”

Thompson began searching for a stump splitter on the internet. He discovered Lumberton, N.J.-based Ransome Attachments and began watching its inventory of attachments in action on YouTube.

He soon found that some equipment dealers were not interested in building such an attachment for a smaller 160-sized excavator.

“Nobody else would even talk about less than a 200,” Thompson recalled, noting that Eric Ransome introduced him to the Shark Tooth and agreed to build the attachment for his Case CX160 Hydraulic Excavator.

“[Ransome] went above and beyond,” Thompson said.

The Shark Tooth is permanently mounted on the Case CX160. Thompson deals with white pine, poplar, curly hard maple, white oak, and red oak trees with stumps up to 37 in. and root balls as large as 6 ft., but he has yet to find a match for the Shark Tooth.

While the Shark Tooth eliminates the need for a stump grinder, this is a non-issue for Thompson since they burn brush piles. Its operation has traditionally involved lighting a pile of brush and stacking stumps on top. The challenge was that slower burning large stumps would pile up as the brush burned off more quickly. Heavy rain further complicated matters.

The jagged teeth of the aptly named Shark Tooth allow the operator to saw through stumps in the ground without leaving a massive hole that would be left by a bucket. The hydraulic thumb then closes on the dull edge of the tooth, allowing the operator to extract the pieces. The teeth can then be used to further downsize the stumps for more efficient disposal.

“It will pull stumps out without busting them more than ten times faster than a bucket,” Thompson said.

“The Shark Tooth has cut our burning time in half,” Thompson said, indicating that his landowner customers are now saving money due to reduced permitting costs related to burning and hauling equipment.

“Now I can put everything in at once because the stumps are so small they burn off like brush. [Shark Tooth] has sped that side of it up so much that I can't keep up with it as a pile burns down. I have to get several days ahead before even lighting a pile.”

Thompson was concerned about durability since the mountainous terrain is often scattered with rocks partially disguised by leaves and brush. The Shark Tooth, made in the United States with AR 400 steel, is holding up well so far but he's prepared to sharpen it if needed.

The Shark Tooth may be designed for stump splitting and harvesting, but Thompson has discovered added value. The contractor has used it to dig trenches for silt fence, load log trailers and backfill excavations after stump extraction.

“Being a small business ourselves, we appreciate our smaller, owner-operated business customers like Brian Thompson just as much as our larger clients,” said Ransome. “When our customers get a good deal, and know they are valued, everyone wins.”