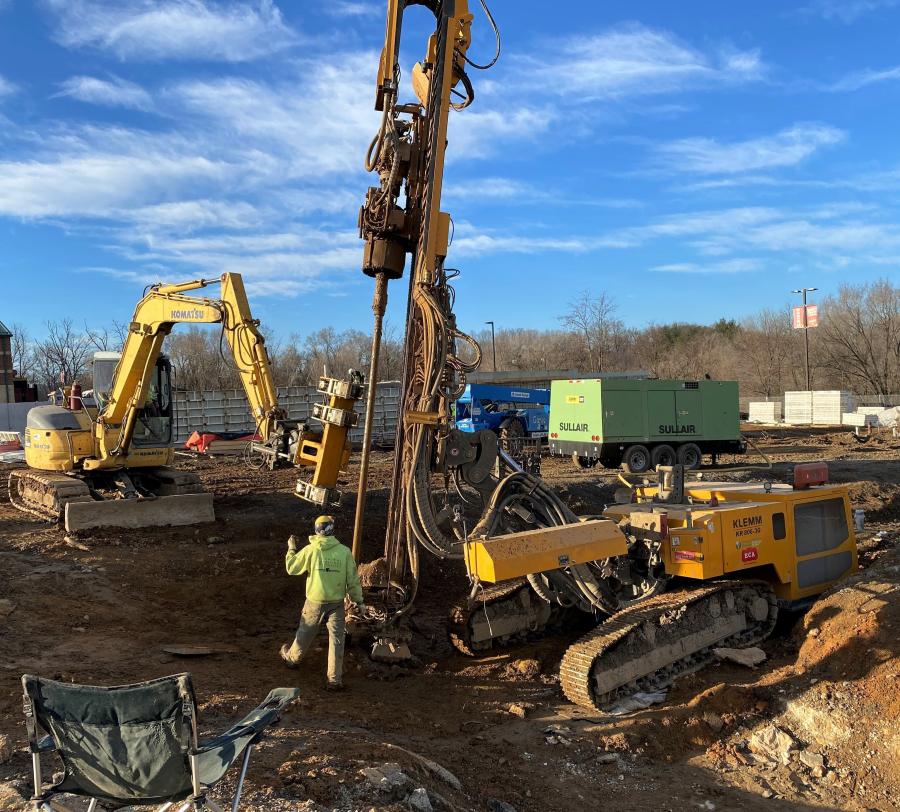 Technical Foundations drilled holes with a KLEMM KR 806-3G and fed rod and casing sections to the rig with an excavator-mounted HBR 120 rod handling attachment on a micropile project near Roanoke, Va.

Technical Foundations has been providing specialty foundation contracting services along the Eastern Seaboard for 27 years, with a heavy focus on Virginia and the Carolinas. The contractor's reputation for taking on unique projects is evident in its selection of equipment, the most recent of which was the rental of a KLEMM drilling rig and rod handling attachment from Equipment Corporation of America (ECA).

The contractor has done business with the ECA Washington branch for more than 10 years. Although the original connection was with Branch Manager Mike Brown — known by Stoneman and many other contractors for his intricate knowledge of the KLEMM line — it was Account Manager Greg Barta who arranged the rental of the drilling rig and rod handling attachment. 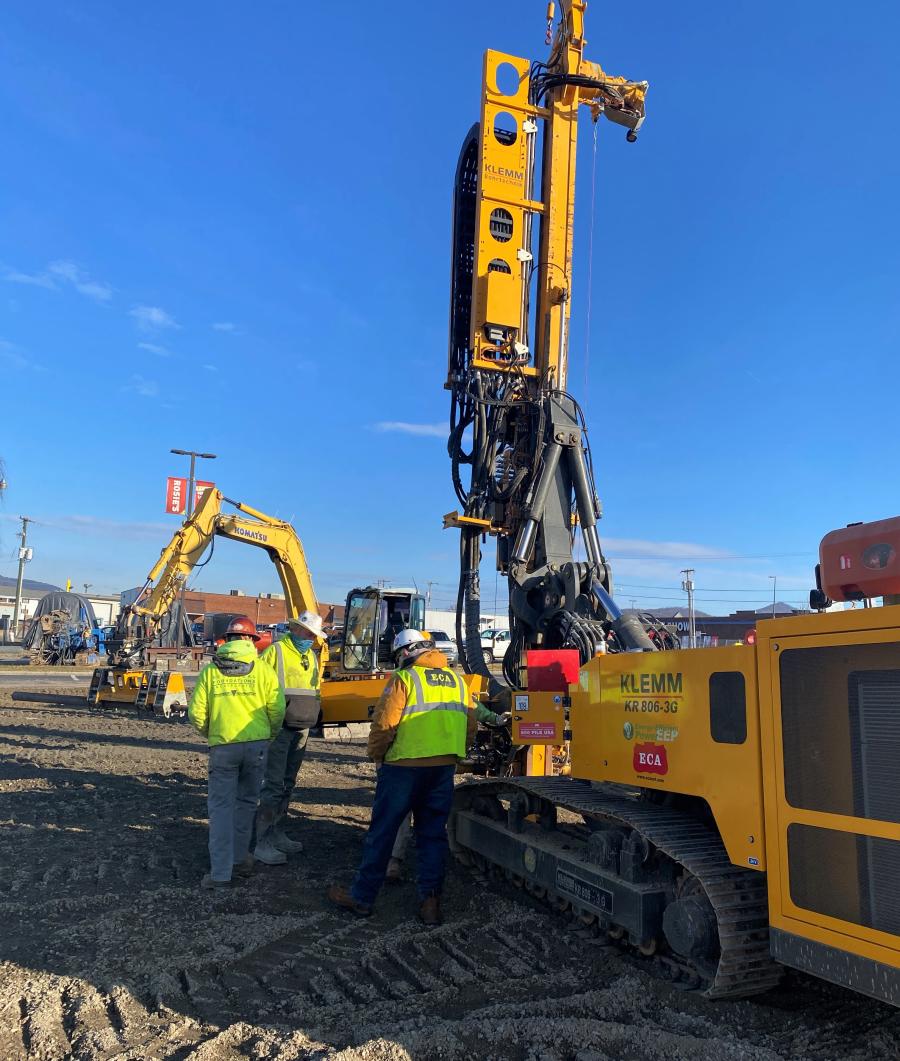 ECA's Account Manager Greg Barta arranged the rental of the KLEMM drilling rig and rod handling attachment and KLEMM specialist Burt Kerns conducted on-site operator training for the team at the beginning of the project since this was the contractor's first time using the HBR 120.

Technical Foundations is no stranger to KLEMM drilling rigs, but ECA's KLEMM specialist Burt Kerns was sent to conduct on-site operator training for the team at the beginning of the project since this was the contractor's first time using the HBR 120 rod handling attachment.

Technical Foundations put the KLEMM drilling rig and handling system to work in January 2021 on a project near Roanoke, Va. The contractor was hired to install 230 micropiles to support a sizeable commercial building addition and multi-story precast parking garage.

The micropiles would be spread across the roughly 2-acre site to support the proposed structures in unsuitable soils. The existing site was essentially a valley that had been backfilled with a variety of materials to level it.

Technical Foundations started off by test drilling to locate the bedrock. During that process, it discovered that unsuitable fill would make it impossible to build the structures on conventional spread footers without settlement issues.

Various deep foundation systems were considered. The existing business would remain fully operational, so avoiding disruption was critical. Driven piles were ruled out primarily due to the vibration that would occur with pile driving and heavy equipment.

After several load tests, it was determined that 6-in.-diameter piles would achieve the right capacity. They were to be clustered in a pile cap configuration around the building columns and under some of the grade beams. 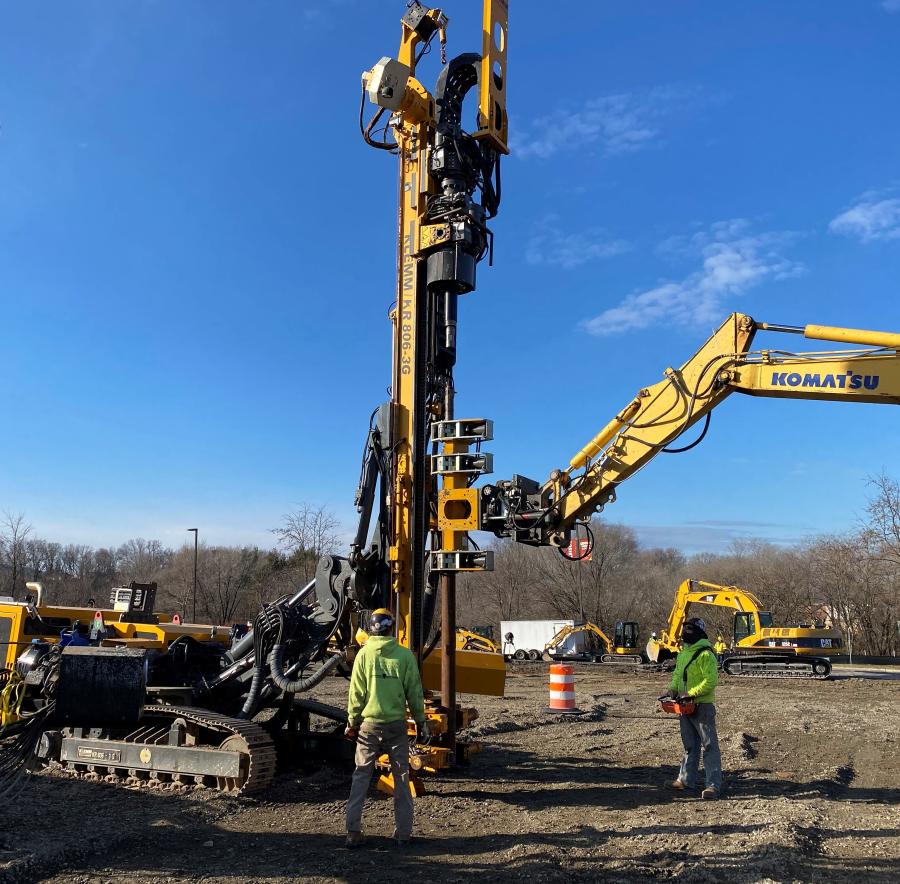 Careful hand signaling was required between a spotter and the equipment operators to get the rod handling attachment and drilling rig mast on the right plane to keep the casing sections properly aligned.

Micropile Drilling with the KLEMM

The KLEMM KR 806-3G was the primary workhorse for micropile drilling. Technical Foundations had several other rigs on standby.

"It was more efficient to have one drill concentrating on drilling and the other focused on grouting the holes afterwards," said Stoneman. "It was also a really tight schedule, so we had an extra machine out there to make sure our flow of work wasn't interrupted."

The KR 806-3G was drilling piles from 20 to 65 ft. deep and seating them 5 ft. into bedrock. The top layer of fill material was generally soft and moist, containing a mixture of concrete debris, tree roots, and various types of soil that had been in place for up to 40 years. The native soil below was a weathered rock, which was underlain by bedrock.

"We chose the KLEMM because it was the most reliable machine we had available, and with the different features it has, it was going to be a little bit more versatile in difficult drilling conditions," said Stoneman, referring to the rig's electronic shifting capabilities, which allow for the changing of torque and speed.

The KR 806-3G's double-head drilling capability also was beneficial since it has separate drives for the outer casing and inner rod. This was especially helpful when drilling through different types of materials and formations. 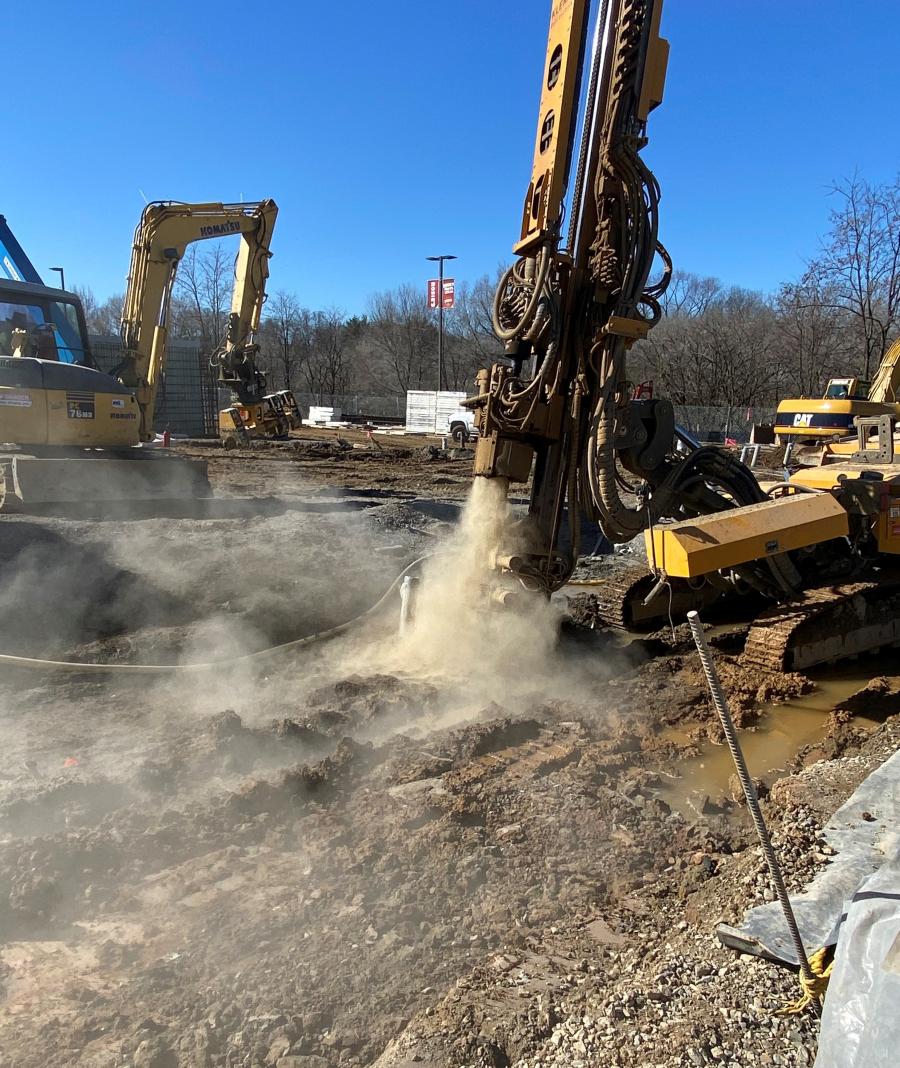 Technical Foundations completed 14 micropiles per day because of the KLEMM rod handling attachment, compared to the 6 to 8 it would normally achieve using traditional methods.

KLEMM drilling rigs can be equipped with a MAG 7.0 Revolver, which is ideal for deep foundation methods like tiebacks or soil nails where the casing is being reused. The KR 806-3G Technical Foundations rented on the Roanoke project did not have a revolver since micropile casings are a one-time use. The HBR 120 rod handling attachment proved to be a better fit.

The drilling crew would drill a hole with the casing and the inner rod. The KR 806-3G operator would leave the casing in place and pull the inner rods. The HBR 120 was then used to grab the inner rod and feed it back into the next piece of casing.

"When the crew was ready to start drilling the next hole, they were all ready to go," said Stoneman. "Having the casing and rods pre-loaded allowed them to drill at a faster production rate."

The smoothness of the micropile drilling operation nearly doubled productivity compared to the contractor's traditional method. Technical Foundations would traditionally use the winch to hoist the casing and inner rod and make the connection by hand. The contractor would typically achieve 6 to 8 micropiles daily with that method compared to the 14 it completed using the KLEMM rod handling attachment.

"The rod handler holds the inner rod and casing still so that we can make the connection to the drill head," explained Stoneman. "The drilling rig operator can detach from both joints, then raise the head up, so it's a faster transition to add the next piece of drill steel."

The HBR 120 can fit on any brand of excavator, but Technical Foundations kept it mounted on a Komatsu. Mounting the attachment was simple. The contractor built an adapter that allowed the rod handling attachment to be easily mounted to the arm with pins and bolts. A piggyback system facilitated the connection of hydraulic hoses and electronics to the fuse block of the excavator. This allowed the operator to easily control the functions of the rod handling attachment, including rotating, tilting, and clamping casing and inner rods.

The HBR 120 can rotate on a 360-degree axis, but Technical Foundations did not require that level of movement on this project. The bigger focus was getting the rod handling attachment and the drilling rig mast on the right plane to keep the casing properly aligned so the sections would thread properly.

This process required careful communication between a spotter and the drilling rig and excavator operators. The KLEMM drilling rig was operated by remote control so he had the flexibility to move into a position with better visibility. The spotter used hand signaling to help both operators to properly line up the joints. 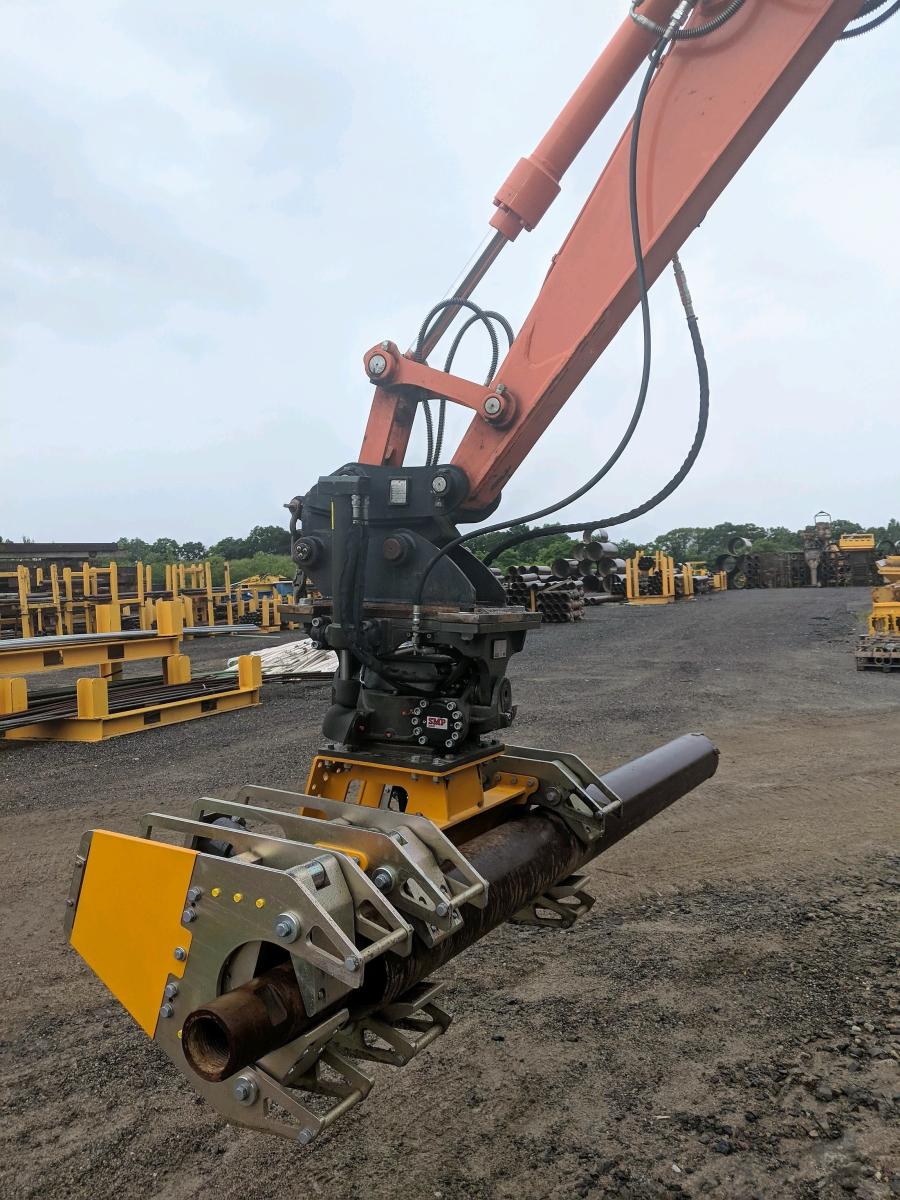 The HBR 120 can rotate on a 360-degree axis, but Technical Foundations did not require that level of movement on this project.

Taking Safety to a New Level

The KLEMM rod handling attachment also improved safety for the Technical Foundations ground crew. The 10-ft.-long inner rod and casing sections were about 300 lbs., which have the potential to cause serious injuries.

"By using the rod handler, you reduce the chance of a pipe section coming loose and falling and hurting somebody, but you also are able to get people's hands away from joints," said Stoneman. "When you can fully eliminate serious injury or any potential human contact, it's a positive thing."

The ability to control the KLEMM drilling rig via remote control added to the safety of the micropile drilling operation. Groundwater kept dust control at a minimum on the Roanoke project, but the ability for the operator to move to an area with improved visibility was helpful.

"With the remote control, the operator can position himself where he's out of the dust that can occur during drilling and in a place where he can best see what's going on," Stoneman said. "The farther away you can get from the machine, the safer the operator is."

Beating the Deadline Despite Additional Micropiles

The owner at the Roanoke project had a drop-dead opening date for this building, so they couldn't extend the schedule, according to Stoneman. Further complicating matters, the owner called for 40 additional piles between the bid submission and project start date.

Technical Foundations arrived on site at the Roanoke project in January of 2021 and finished in late February of 2021.

Stoneman said, "Our crew worked through some extreme conditions and the equipment improved productivity, so we finished the job several days ahead of schedule even after starting about a week behind."

Technical Foundations rented the KLEMM drilling rig and rod handling attachment from ECA for the Roanoke project. After it was complete, the safety and productivity gains combined with the potential for future projects made the decision to purchase the HBR 120 an easy one for the contractor. Technical Foundations didn't have enough relevant work to keep the KR 806-3G consistently busy at that point.

"We were exceptionally pleased with the productivity and the safety it [HBR 120] added to the project," said Stoneman. "We see multiple places where it will benefit us in the future."