Lawyers and experts were on hand to inspect the site and draw their own conclusions about what caused the Dec. 2 collapse. 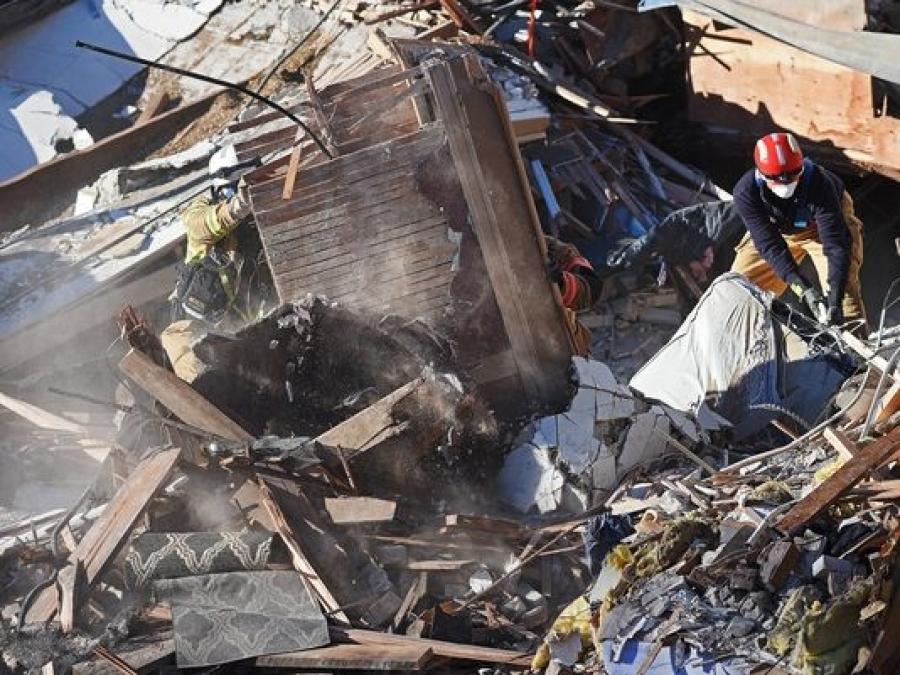 Rescue workers with Sioux Falls Fire Rescue work to rescue a third dog at the site of the Copper Lounge building collapse Sunday, Dec. 4, 2016, in downtown Sioux Falls more than 48 hours after the collapse. One person was killed and another injured in the collapse. Two other dogs were also rescued from the scene. (Argus Leader photo)

The parties who have a potential legal claim in the collapse of the downtown Copper Lounge building had a final opportunity to inspect the ruins last week, before crews started removing critical pieces of the building.

Lawyers and experts were on hand to inspect the site and draw their own conclusions about what caused the Dec. 2 collapse, which killed one person and trapped another for three hours.

The stakes are high for those who suffered damages in the collapse. The various investigations will determine who is responsible and who would then be liable for damages. And the list of those harmed is long: From the family of Ethan McMahon, the construction worker who lost his life, to Emily Fodness, the young woman injured in the collapse and her family who lost their apartment and possessions, to the neighboring PAve Bar, which was damaged in the collapse, to other nearby businesses that were forced to shut down at the height of the Christmas retail season.

“There's a lot that's going to be at play in this case,” said Bob Trzynka, a lawyer with the Cutler Law Firm.

A key issue to the aftermath is insurance. What policies existed for Hultgren Construction, which was renovating the building at the time of the collapse, and what coverage did the property owner have? And is there enough insurance to cover the multiple claims expected in the wake of the downtown catastrophe?

“It wouldn't surprise me if at some point there was some sort of insurance coverage issue,” Trzynka added.

Mark O'Leary, a lawyer representing the construction company, said he could not comment on the issue.

Insurance investigators will not only determine a cause but they will determine whether those causes are covered under the various policies.

“Ultimately,” said Kevin Pollack, a lawyer with the Merlin Law Group's Los Angeles office and a contributor to the Property Insurance Coverage Law Blog, “determining the particular cause of the loss will assist in evaluating the various coverage issues.”

Without seeing the policies and knowing what exclusions exist, Pollack said it's impossible to know what would be covered. Typically, business owners' insurance has two components: One that covers damage to the property and a second that covers liability if someone gets hurt on the property. But property insurance doesn't always cover damages caused by construction.

“Generally speaking, property insurance policies contain 'faulty workmanship' exclusions,” Pollack said. “These exclusions typically bar coverage for any loss caused by the faulty acts, errors or omissions of the insured or any other person in planning, construction or maintenance.”

Another issue could be whether investigators conclude that Hultgren Construction acted recklessly, as opposed to negligently. The intent of the project was to convert the Copper Lounge and neighboring Skelly's Bar into a space for a drug store. At the time of the collapse, the city had only issued a permit authorizing the demolition of cosmetic features. But Hultgren Construction posted pictures on its Facebook page showing the demolition of what experts say was a long, load-bearing wall. The question could come down to whether removing the wall – if that was the cause of the collapse – was an act of negligence or recklessness.

“When you go beyond the permit and start taking out load-bearing walls without planning, you're getting close to recklessness,” said Jonathan Van Patten, a law professor at the University of South Dakota School of Law.

The distinction between negligence and recklessness could determine whether there's coverage.

Negligence, Van Patten said, is an act of not being careful. Recklessness is indifference to the rights of others. Insurance policies provide indemnification for negligence.

“That's OK,” Van Patten said. “We are careless from time to time. That's why we are required to have auto insurance.”

Reckless behavior might not be covered by a policy, but it could be tricky to show that the construction company or its employees were knowingly indifferent to the rights of others.

“It would be hard to be reckless without some type of knowledge,” Van Patten said. “What did they know, and when did they know it?”

The situation could become even more complex because of the relationships between the various entities involved in the project, Trzynka said. Aaron Hultgren, the owner of Hultgren Construction, is a manager of Legacy Development and Consulting Co., which organized the investors in both the PAve project and the Copper Lounge project.

“I think the most complex issue you're going to see in this is the relationship between Hultgren Construction and the other entities involved – whether it's Legacy, the investors at PAve,” Trzynka said. “Because it appears there's a lot of overlap at play.”

In the end, even if the insurance companies deny coverage, it's likely that they will still defend the policy holders under what's known as a reservation of rights, Trzynka said. That's because insurers have an “inherent duty” to defend.

As lawyers and construction experts combed over the scene last week, the unanswered question was whether there would be insurance, and if there is coverage, how much.

Betsy Ertel, a spokeswoman for the Cincinnati Insurance Cos., which insured the building, said in an email that in general, the company's claims professionals try to determine what caused a loss.

“After the cause of loss is determined, the policy contract is reviewed to determine what coverage, if any, applies based on facts of each specific loss.”

“We work diligently to gather all the facts so that we can bring it to a close as soon as possible,” she added.

But few of those involved or observing expect any quick resolutions. And that will be especially true if the Copper Lounge collapse spawns litigation, which is likely inevitable.