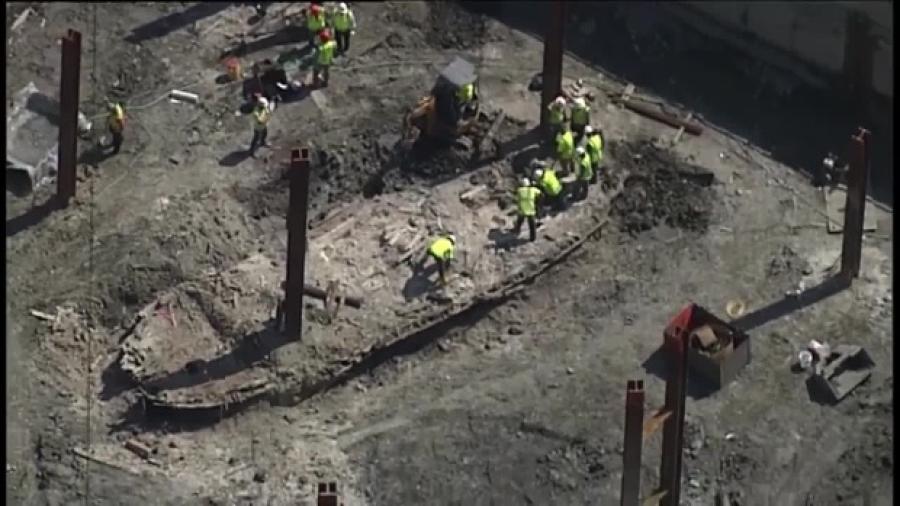 Image courtesy of WCVB.CNN is reporting that construction crews have unearthed a historic find: the remains off a 50-foot wooden ship from the mid- to late 1800s.

CNN is reporting that construction crews have unearthed a historic find: the remains off a 50-foot wooden ship from the mid- to late 1800s.

"This is the first shipwreck that I know of in Boston discovered in filled land," city archaeologist Joe Bagley told CNN affiliate WBZ. "This is the largest and most significant by far."

The Skanska construction crew stumbled across the discovery in the Seaport District last week and immediately halted construction.

How did it get on land?

"At this point, we're not quite sure, because it's definitely in an area that was mud flats at low tide. So the ship may have run aground or crashed here during a storm," Bagley told CNN affiliate WBZ.

The area in which it was discovered is walking distance to several piers overlooking Boston Harbor.

No treasure chest full of gold was found during Bagley's excavation of the site on Wednesday.

But he did find barrels of lime in the hull, which he determined they were hauling to Boston.

Bagley suspects the crew took all the valuables off the ship and then set part of it on fire so that it would sink into the mud.

"You certainly come across a lot of interesting things when you do below-grade excavation, but I've never seen anything like this in my career," Skanska executive Shawn Hurley told WBZ.