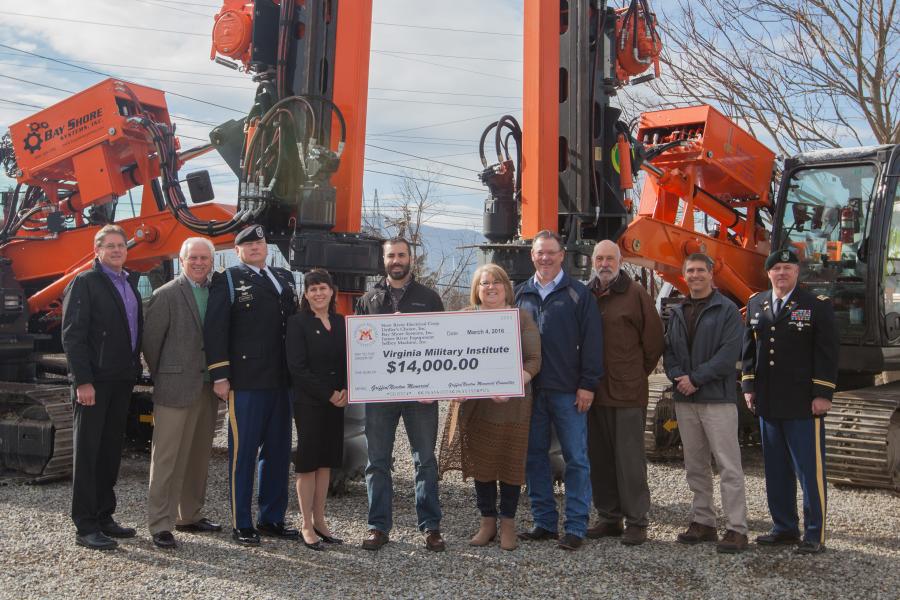 On a chilly and blustery day this past March, a very special pair of crawler-mounted drills were received at a Virginia-based electrical contractor before being dedicated to honor two of America's fallen soldiers.

What began as a simple request to name the rigs after men killed in service to their country soon ballooned into something much more.

As a result, a partnership was developed between the contractor, New River Electrical Corp. (NRE) and the drilling rigs' various suppliers and dealers to channel more than $10,000 to the Virginia Military Institute (VMI) in Lexington.

On Oct. 27, 2009, while on patrol in the Arghandab Valley in Afghanistan, Sgt. Dale Griffin died from wounds sustained from an improvised explosive device (IED) when enemy forces attacked his vehicle. Capt. Michael Newton was killed almost two years later on June 11, 2011 in Afghanistan's Faryab Province.

Now, as a civilian, Bandy is the director of fleet operations of NRE in Cloverdale, Va., just outside Roanoke. NRE is a large electrical contracting firm that handles the high-voltage and maintenance needs of its utility and industrial customers.

When NRE decided it needed to buy two new specialty drilling rigs, he learned that the company that builds the machines, Bay Shore Systems, likes to assign actual names to the units as they go through their production cycle.

Some are named after a company's long-time superintendent, for instance; maybe it's something light-hearted like the name of someone's old girlfriend. It may even be the title of a favorite song.

But, when Bandy was given the opportunity to name the new rigs, the two he had in mind came to him after serious reflection: They would be christened “Griffin” and “Newton” after his fallen comrades.

The new Bay Shore TR20 drilling rigs are used mainly in the construction and renovation of NRE substations and overhead-line transmission projects across its multi-state service area.

“My intent in the naming of these units after Dale and Mike was to commemorate their service and sacrifice in a way that I felt would continue their legacy,” Bandy said. “I can't think of a more fitting tribute to their memories than these machines whose sole purpose is to drill and grind out the foundations that, in turn, allow us to build a solid, reliable electrical grid upon.”

Bandy hopes that his fellow veterans at NRE, of which there are many among its more than 1,100 employees, will either get to run or see the drills in operation, all the while keeping in mind Capt. Newton and Sgt. Griffin's stories and their legacies.

“I want my fellow employees to know that at the end of the day, we remember those who paid the ultimate price for our freedoms and that we will not take that for granted,” he said.

Two Components Make Up a Rig

The drilling rigs themselves each had its particular name etched onto the serial number plate just before NRE took delivery earlier this year.

Each drilling unit is made up of two components: a pair of Hitachi EX 135LC-5 excavators, purchased from Virginia-based James River Equipment; and the two Bay Shore TR20 drilling rigs, obtained by NRE from the experts at Drillers' Choice, a drilling supply specialist based in Marietta, Ga.

Drillers' Choice incorporated augers and tooling for the rigs from Jeffrey Machine Inc. in Birmingham, Ala., before sending them on to NRE.

Bay Shore Systems is located in Rathdrum, Idaho, and is known for manufacturing foundation drilling equipment since 1978.

The naming of the drilling rigs, though, was not the only honor that Bandy was able to bestow upon Dale Griffin and Michael Newton's legacies.

After Bandy had a conversation with Allen Cellar, president of Drillers' Choice, it was decided to ask each of the manufacturers that produced the drill, the carrier and the drilling accessories, along with NRE, to make a contribution to the VMI Foundation, the organization that raises and maintains private money for the Institute.

The reaction to Bandy's proposal was more than he could have hope. Every firm he asked responded enthusiastically and, as a result, a total of $14,000 was raised for memorial donations in Griffin and Newton's names to be used for the VMI wrestling team, the rifle team and the Electrical Engineering Department.

“When Allen asked me the significance of the names for the rigs, I had no idea that it would have led to this outpouring of support from all the vendors involved in the process,” Bandy said. “I spent nearly 15 years in the equipment industry prior to coming on board with New River in my capacity here and I have seen a strong show of support for our soldiers, sailors, marines and airmen, as well as our veterans and fallen warriors.”

Bandy added that he believes the construction and equipment industries greatly benefit by hiring veterans who come out of the armed forces looking for careers, while still being able to continue their military service, such as through the National Guard.

“They bring with them a drive, maturity and confidence that their service in uniform gave them,” he said.

Dedicated and On the Job

On March 4, a ceremony to dedicate the two new drilling rigs was held at NRE's yard in Cloverdale.

Now that the drilling rigs have started their work, Bandy is justifiably proud at how his friends' memories are reflected in these strong, hard-working machines.

“These units will literally be laying the foundations by which tens, if not hundreds of thousands, of Americans will benefit from by providing the transmission and distribution of reliable electrical energy to their homes and businesses for decades to come,” Bandy said.