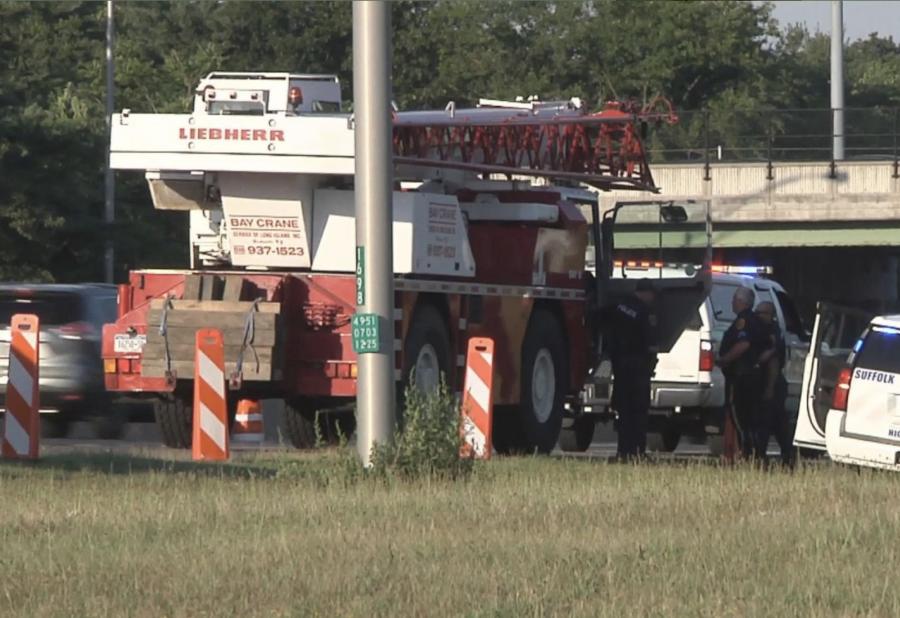 A man is in custody after driving a crane drunk down the Long Island Expressway (LIE) on the evening of July 11.

Forty-seven-year-old Brian Sinclair drove a 2000 Liebherr mobile crane drunk for nine miles on the eastbound side of the LIE, starting at the Ronkonkoma entrance at around 6 p.m. The equipment had logos for Bay Crane in Long Island City, N.Y., on the back and the sides.

During his journey, Sinclair crashed into a 1999 Nissan Altima around Exit 57, a 2015 Jeep Cherokee, a 2008 Honda Civic and a 2018 Toyota RAV4, before leaving the scene of the accidents, the New York Post reported.

After a series of 911 calls at 6:14 p.m., Highway Patrol Officer Joseph Goss of the Suffolk Police Department saw Sinclair weaving the crane in and out of traffic at about 48 miles per hour around Exit 60, Newsday reported. While Goss turned on his siren and lights and drove across three lanes in an attempt to keep other vehicles away from the crane, Sinclair didn't stop, said Suffolk police Chief of Department Stuart Cameron.

Two K-9 unit officers from the Suffolk Police Department joined the chase, while a second highway patrol officer got in front of the crane to force Sinclair to pull over to the right shoulder. As the crane slowed, Goss jumped into its passenger side, Newsday reported.

“I was able to use my service weapon to convince the driver to put the vehicle into park, which he did,” said Goss.

Sinclair's response to Goss was simply, “What's up?”

“I thought he was going to crash and kill somebody,” Goss said later at a press conference. “My primary goal was getting that car stopped and just keeping other motorists away from him because if he made a slight contact, it would just shred their car apart.”

During the accident, Goss hurt his ankle, which was treated at Stony Brook University Hospital.

Sinclair pleaded not guilty July 11 to driving while intoxicated and leaving the scene of an accident, according to a spokeswoman for District Attorney Timothy Sini. Court records said that when Sinclair was pulled over, he had alcohol on his breath, had bloodshot eyes, was unsteady, was slurring his words, and would not take a Breathalyzer test. While bail was set for $5,000 cash or $15,000 bond, court records indicate that neither was posted, Newsday reported.

According to police the crane was impounded, the New York Post reported.

According to Sinclair's attorney Colin Patrick Astarita, Sinclair claimed he had fallen asleep at the wheel of the crane.

“He worked all day,” said Astarita of Sinclair, who was pictured wearing a Bay Crane shirt when he was arrested. “It certainly has happened where people have been in and out of sleep while driving and have gotten into similar types of accidents … With a vehicle of that size, you can drive over a fence and not even know it.

There's nothing to support [driving drunk] other than any observations made by the police officer. There's no alcohol in the vehicle and no admission of alcohol. There's no breath test and no blood test,” Astarita continued.

Sinclair is scheduled to appear in court on July 20, Newsday reported.

The drivers of the vehicles that Sinclair crashed into sustained minor injuries, and most were treated at area hospitals, the New York Post reported.

According to Cameron, however, the consequences could have been much worse.

“I don't really think you need to use too much imagination to see the potential catastrophe that could have occurred had this crane not been stopped,” he said during a news conference, “a 30-ton crane operated by someone who was impaired by alcohol on the Expressway during rush hour.”