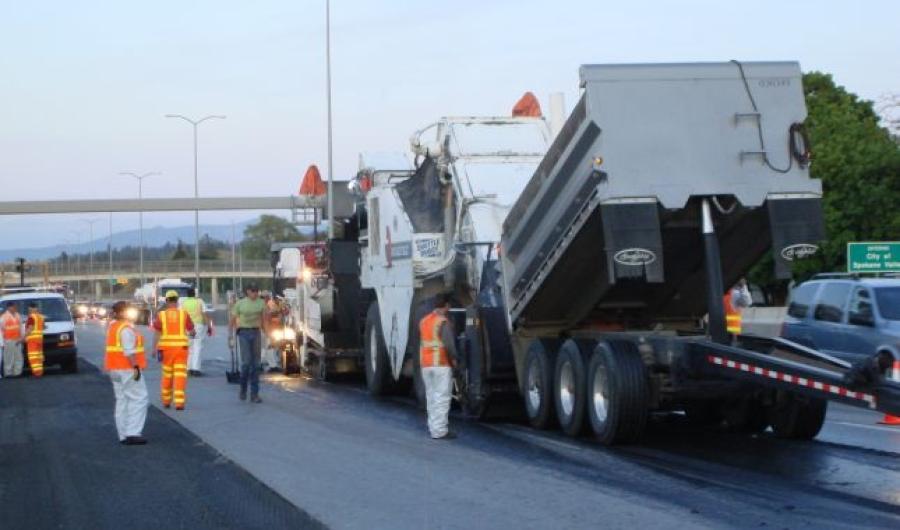 The contractor will be working around the clock to finish this," said Sharif Shaklawun, project engineer. (inlandasphaltpaving.com photo)

With that in mind, contractors say they've found a way to condense 30 nights of highway lane closures into less than three days of labor, working nonstop to finish a fish passageway while repaving about one mile of State Route 167.

"It's a very aggressive schedule. The contractor will be working around the clock to finish this," said Sharif Shaklawun, project engineer. "We understand this project alone is not the solution to all the traffic challenges on this corridor but this is going to be helpful to keep traffic going on this section."

The project is part of a roughly two-year plan to expand the State Route 167 high occupancy toll, or HOT, lanes. Crews with the Washington State Department of Transportation will be closing all lanes of southbound SR 167 between Ellingson Road and 8th Street East from 11 pm Friday night until 5 am Monday, officials said.

"We said, 'hey, the best thing to do is rip the band-aid off versus a slow pull,' and it helps traffic quite a bit," said Larry Smith, the project manager. "Putting all the factors together, it made it a pretty easy decision for us to say, 'hey, what's going to be safe? What's going to be productive? What's going to get us in and out as quick as possible?'"

During the project, workers will excavate enough dirt to fill more than 100 swimming pools. They will also use 10,000 tons of asphalt in paving the road -- or, roughly the weight of the Space Needle, said Caitlin Morris, a WSDOT representative.

Improvements to the fish culvert will help Chinook and coho salmon, along with steelhead trout, which use nearby Jovita Creek in their migration. The current culvert has a water flow that is too low and too fast for fish to swim in, Morris said.

"This is one big wetland. State Route 167 is like the dike that separates the two sides," Smith added. "It's all about improving fish quality, fish habitat, and it's our legacy -- what we do, clean up for the future generations."