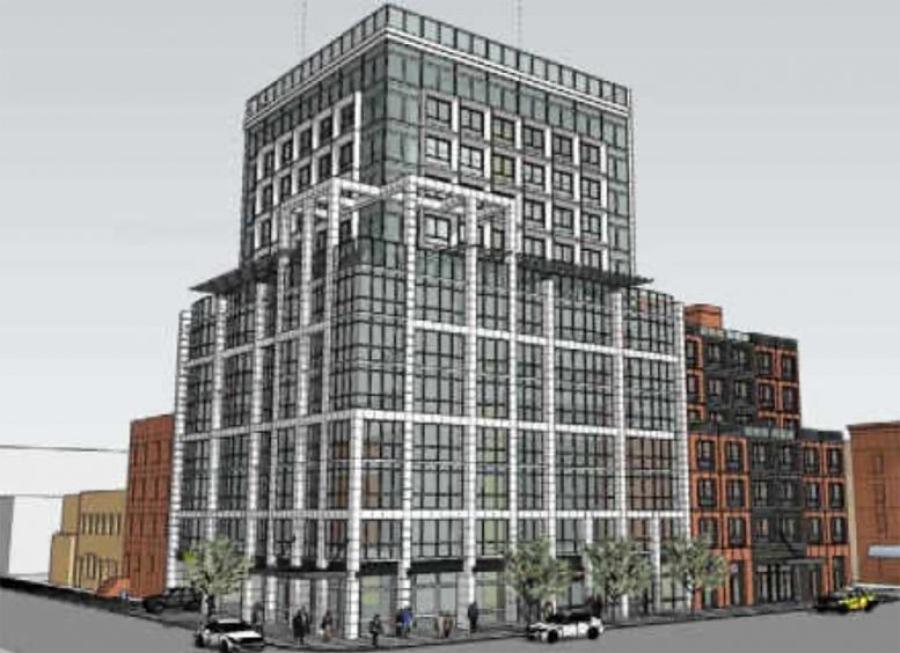 Developers recently revealed the first renderings and construction plans for a new full-service hotel in the Belmont, N.Y., section of The Bronx, also referred to as Little Italy.

Located on East 188th Street between Arthur and Hughes avenues, the project also could contain a collection of income-restricted apartments and a large parking garage.

The proposed development calls for the construction of two connected buildings totaling approximately 150,753 gross sq. ft. This includes an assemblage of neighboring lots currently occupied by a mix of low-rise residential and commercial properties.

The first building, referred to as Building A, occupies the eastern boundary of the development site. The structure would top out at seven stories above ground or approximately 75 ft. tall. Its residential area would span 58,091 sq. ft. and comprise 56 individual units. Many of the apartments will qualify as affordable housing with varying income restrictions.

As designed, this structure would feature a more modern design, with a mix of glass and metal cladding. A grid of white beams adds texture and frames a pergola over an outdoor terrace atop the main setback.

Building B is positioned at the western boundary of the property and would contain the entirety of the hospitality component. Proposals specify the construction of 176 rooms spread across 13 floors. This component will max out at 70,409 sq. ft. The building is rendered with a more traditional composition, with what looks to be a masonry façade with red and black brick.

The project team behind the development is not clear. 2461 Hughes Associates is the only applicant listed on proposals, which also do not specify an architect of record.

Before the development can go ahead, the New York City Department of City Planning would need to approve several zoning amendments to allow the construction of a mixed-use property with residential and commercial components and an increase of the area's allowable residential density within a multifamily building.

Should the zoning amendments be approved by the planning department, it is anticipated that the modifications will spur a multitude of new mixed-use developments surrounding Arthur Avenue's vibrant commercial corridor. Today, the avenue is considered a major hub of commerce with an array of traditional Italian restaurants that enriches neighboring historic sites including Fordham University, the New York Botanical Gardens, and the Bronx Zoo, among other destinations.

The proposed zoning map amendments also are consistent with the goals and objectives of 2013's East Fordham Road Rezoning initiative. The city-sponsored initiative successfully rezoned 12 blocks of the road, located just one block from the proposed development, to spur the construction of new mixed-use properties.

If approved, the development's construction would be completed in a single phase and could wrap by the end of 2023.

The NYC Planning Commission has already issued a negative declaration on the environmental impact of the proposed zoning amendments and proposed development. This means that the agency has found no evidence that completion of the project will result in significant adverse impacts on the surrounding neighborhood, infrastructure, natural environment, air quality or the immediate streetscape.