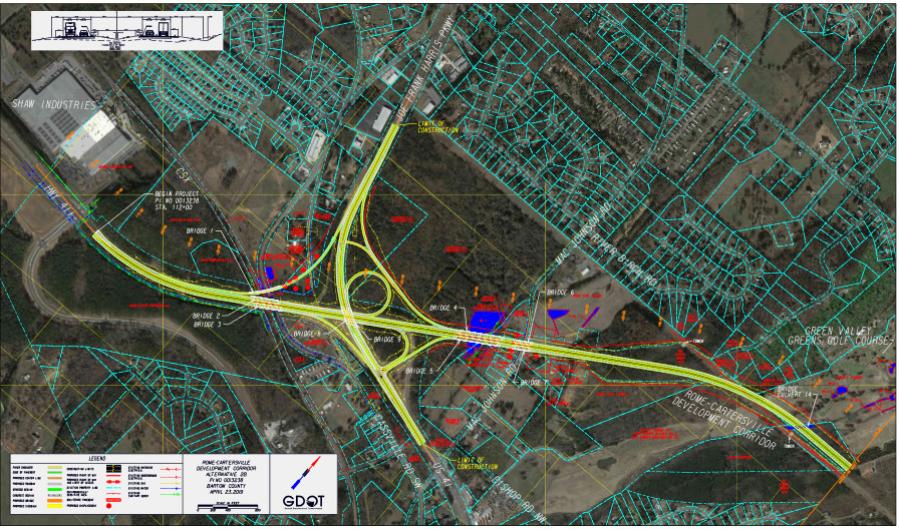 The long-awaited Rome-Cartersville Development Corridor is expected to begin construction in FY 2023.

In many respects, Tom Sills, transportation planner of the Cartersville-Bartow County Metropolitan Planning Organization (MPO), said 2021 represents something of a calm before the storm when it comes to major roadwork projects planned throughout his Georgia community, northwest of Atlanta.

He added that construction funding is in place, and Cartersville-Bartow is "blessed with a state coffer that can ...bring in some resources to continue projects that were long needed in the county."

From a regional perspective, all eyes are on the 2023 fiscal year. That is when the long-awaited Rome-Cartersville Development Corridor is finally expected to begin construction.

Sills said right of way acquisition on that project — which would directly connect U.S. Highway 411 to Interstate 75 through a new roadway stretching from Shaw Plant X to a new interchange along Cass-White Road — is expected to get under way before the end of 2021.

Preliminary engineering on the project is tabbed at $2.1 million, with Fiscal Year 2021 right of way costs set at $4.8 million. The Georgia Department of Transportation (GDOT) has set aside $7.4 million for FY 2022 right of way costs; total construction costs of the project are currently estimated at $109 million.

On the local level, Sills said there is no question that the final leg of the Old Alabama Road widening project is the biggest project under construction in Bartow for 2021.

"They've got five miles of work to do between now and 2023, so we're going to see some major changes taking place in that corridor," he said. "Some of that is already going on with the clearing they're doing on Paga Mine Road. That will continue on towards the airport and on out to [GA Route] 113."

GDOT tabs the total cost of that project at $77.8 million. The enterprise, Sills noted, will also entail major utility improvements in the area, most notably the installation of new waterlines.

"And then after that will be the full-on construction of the additional lanes of roadway," he added.

Elsewhere in the county, Sills said preliminary engineering is expected to be completed in the year ahead for a massive GA Rt. 20 project, which would convert the roadway to four lanes from the I-75 interchange in Bartow as far as the I-575 interchange in Cherokee County.

Looking ahead, Bartow County will be a busy place for road and bridge construction in the next few years:

Bartow County also is evaluating the possibility of constructing a new I-75 interchange between the Cass-White and Adairsville exits.

"Hopefully, we will secure money to look at an analysis of where the best location for such an interchange might be," he said. "Different locations have been talked about and we just need to get an idea of which one will produce the most economic impact for the community."

Sills also touched upon proposals for two new roundabout projects, one along Red Top Mountain Road and the other near the intersection of Hamilton Crossing Road and Kingston Highway. The former is associated with the proposed Vineyard Park mixed use development while the latter is near a proposed 189-lot subdivision.

"Both of those roundabouts are dependent on the actions of the adjacent developer," he explained. "We have made a commitment to do those projects; we're getting to the part of ‘show me the money' from the developers."

Motorists on I-75 also should expect to see some roadwork throughout 2021 in Bartow County.

"I expect GDOT will be trying to resurface I-75 from the Cobb County side up to Glade Road," Sills predicted. "I believe there's some projects set aside — I can't recall if it's this year or the next — to repave the rest of I-75 going north."

He does not think a new presidential administration and the mass distribution of COVID-19 vaccinations will have anything other than a light impact on his county's transportation planning. Indeed, if anything, Sills said he foresees more transportation dollars flowing from the federal level in the year ahead.

"We haven't had a real serious interruption in our funding," he noted. "What I do expect to see is a renewed emphasis on infrastructure as a means of getting the economy going and getting people back to work. All indications are there's going to be some serious discussion in Washington about infrastructure and how it can pull the country out of its current doldrums."