Highway Superintendent Bill Holvig and the Town of Mohawk 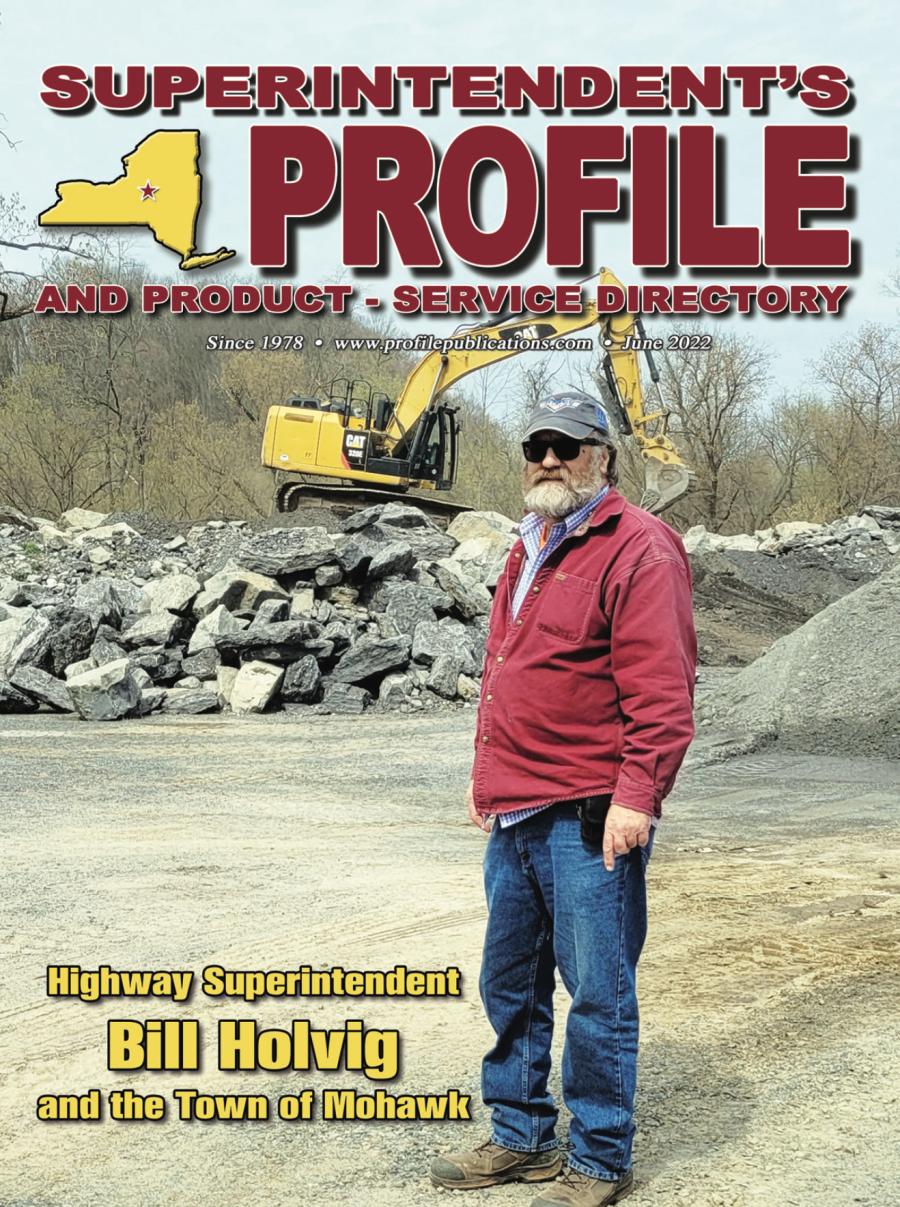 Bill Holvig may just be one of the longest running highway superintendents. He's been at the helm of the town of Mohawk Highway Department for 27 years. He stepped into the superintendent's shoes in 1995 and never looked back.

And it doesn't look like he's ready to retire any time soon.

Born in Brooklyn, Bill and his family moved to Clarkstown in 1960. In 1980, they moved to the town of Esperance in Schoharie County. Then, in 1993, Bill moved to Fonda and he's been there for nearly 29 years.

"I started out as a carpenter and then got into construction management," he said. "I traveled all over the Albany area and finally got tired of traveling. One of the counselors asked if I wanted to run for highway superintendent. Actually, they were going to do an appointment because the previous highway super was going to retire and the board was going to appoint someone. So, I put in an application along with one other guy. They appointed me in November 1995. I ran again in 1996. The same guy ran against me. I beat him and I've been here ever since."

In his spare time, Bill and wife, Judy, enjoy their two Great Danes, Dottie and Deuce, and their horse Dee Dee. Bill also likes hunting on his property, fishing the lakes in the Adirondacks and riding his motorcycle "anywhere."

"I don't like riding in the city," he said. "I only take back roads. It's too dangerous. I get on my bike and it's an instant getaway. I've pretty much given up boating and snowmobiles. I'm sleeping in the winter now."

Bill is the treasurer of the Montgomery County Highway Superintendents Association.

"I'm pretty involved. I set up all the meetings and the golf outing. I also do our yearly books. I enjoy it. It's a volunteer thing."

As for life after this, Bill confessed his ultimate dream is "to work on my own place doing woodworking and projects around the house."

He's quick to add, however, that "I'd like to stay here and work for the town as long as I can. It keeps me young."

Getting the Job Done

The highway department's facilities consist of a main garage, a back barn that's attached to the garage and an annex building that's used for storage.

"There's also a large pole barn where we can back the trucks in on an angle," Bill said. "We only have two doors. One on either end. Then we have a back barn with four doors. That's more storage and it's heated as well. There's never enough room. You can always use more space.

"We didn't have a salt storage," he added. "There was a sand pile and they'd dump the salt by the sandpile and cover it with a tarp. With my construction background, we built three salt sheds. Now we have 300 times the salt."

The town of Mohawk's highway department is in charge of maintaining 63.18 lane miles of town road. They also maintain 68.94 miles of county roads. During the winter months that translates into five plowing routes that take roughly three to three-and-a-half hours.

As you might imagine, a small-town highway department requires an equally small staff.

When it comes to his crew, Bill has nothing but praise.

"I have a great bunch of guys," he said. "They work well together. There aren't many of us and I wouldn't ask any of them to do something I wouldn't do myself. Usually, I'm right in the hole with them. We work as a tight knit group. You don't always see that.

"Over the years, the guys that left went on to have their own businesses. We're still friends. I hired them because they were go-getters and workers. If somebody wants to leave to better themselves, I won't hold them back or hold it against them."

To carry out its duties, the town uses a well-rounded fleet of equipment that includes:

"When I got here, we had 1970s dump trucks with gas motors," Bill said. "They were junk. You could hardly go out and haul anything without working on them. We had a few International dump trucks. I started in November and the truck they ordered came in March. It was an all-wheel drive truck with no plow equipment. They were going to take the plow equipment off an old 1960s Dodge they had and transferred it onto a 1995 truck. Now, you have all this old equipment going on to a brand new one, figured they'd save some money.

"My mechanic ended up working for almost a year to transfer the equipment. I bought two sanders and then we used that truck. It worked out. I mean, a lot of the old stuff was weakened. At this point, my oldest plow truck is the main plow truck as of 2015. We have 2019s and 2000s. They're all Western Stars with lots of interchangeable parts. They all basically have the same motor and stock different filters."

Over the years, the town had to deal with flooding.

According to Bill, "One time, the river came up and the locks weren't operating properly. Basically, the river was running through. We had current running through the town barn. The garage doors were open because the current goes right through our garage. I think there was a flood in 2011."

The town also experienced Hurricane Irene and then another one.

"We had about two feet of water in our town garage and about a foot of water in the town hall. The first flood had pressboard deck desks. I went in there with a sledgehammer, busted them up and threw them away.

"After that, I talked them into buying desks with metal bottoms, so they can be sterilized and reused. Everything needed to be gutted four feet up in the garage and town hall. There was hundreds of thousands of dollars in damage. Our roads were devastated. We got everything back together and then we had another flood."

When Bill started, Common Roads, a main artery through town, had been closed for six years.

"There's a one-lane bridge. The bank was unstable and slid into the creek. I wanted to get that road open for fire protection being a main artery. It's a shortcut to Johnstown. The road should have been open. I was trying to find outside money since, at that time, my CHIPS money was about $24,000, which didn't really accomplish much. I was able to find a $40,000 Nonpoint Source Pollution grant through Montgomery County Soil Conservation for the siltation of the creek bed. The caveat is also a classified trout stream. It was a matching grant. Our portion was in-kind services. I had to acquire a piece of land so we could move the road back from the creek.

"We acquired that and then I borrowed the county's bulldozer to cut back the bank to get the proper slope. We put under drains in to carry the water so the base wouldn't be compromised. I contracted out the construction of 100-foot concrete retaining wall that was tied into the bridge abutment. That allowed us to open up the road up and it's held up very well.

"I taped it last year. Now speed is an issue. I plan to put a double yellow line and some white lines on the edges. Because the way people drive on roads that don't have lines. They're distracted. You come to a blind hill and they're right in the center."

Seeing projects come to fruition is one of Bill's favorite parts of the job.

"It's nice to see a project completed in such a way that it comes in under budget, on time and the way you wanted it. Everybody's happy and what's better than everybody being happy?"

When all is said and done, how would Bill Holvig want to be remembered?

"As someone who tried to make the town a better place."

About the Town of Mohawk

The town of Mohawk is located in Montgomery County. It includes the village of Fonda and part of Tribes Hill. The town is bounded on the south by the Mohawk River. Fulton County is the northern border and the towns of Palatine and Amsterdam represent the western and eastern borders, respectively.

The town is home to the county seat, Fonda. Fonda also is home to the Fonda Fairgrounds and Speedway. The National Kateri Tekakwitha Shrine is located in the town, as are several other historic landmarks. The Montgomery County offices also are located in Fonda.

The town of Mohawk is rich with local history reaching back to when the Indian tribe "Mohawks" inhabited the area and when the Jesuit priests came to set up the Kateri Tekakwitha Shrine we still know today. After the American Revolution, the area of New York State then known as Tryon County was renamed Montgomery County in honor of General Richard Montgomery. With the railroad being built in 1834, towns along its path became more prosperous, with Fonda being one of those towns. With the increase in population and the county seat, which at the time was Johnstown (a city only accessible by stage), Fonda became the new county seat in 1836.

The original size of Montgomery was quite large before other counties began to break off from it. The final county to form from Montgomery County was Fulton in 1838 and the southern half of the town of Johnstown became the town of Mohawk on April 4, 1837.