Highway Superintendent Bruce Thompson and the Town of Stockholm 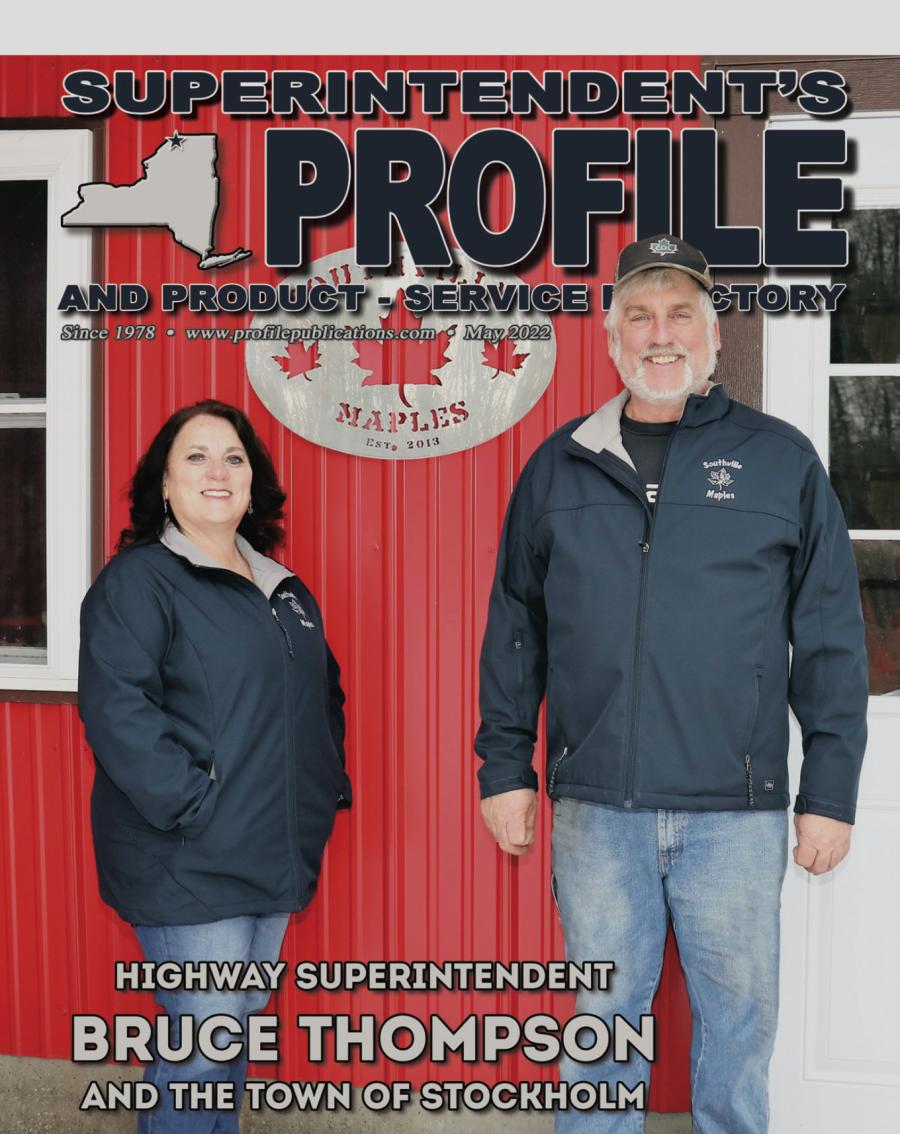 With town of Stockholm Highway Superintendent Bruce Thompson what you see is what you get: a down-to-earth fellow who takes great pride in what he does.

It doesn't take long to realize that he means business. Obviously a man comfortable in his own skin, Bruce handles himself with confidence and ease as he tells of his journey in the job.

"I grew up on a small hobby farm in the country and then I worked on two farms," he said. "We had beef cattle, pigs, riding horses. Never had workhorses, but I used to help my uncle in the sugar bush with a team of them. There was a farm on each side of me. I'd work at both of them, one in the summertime and another during the winter six nights a week. I'd go up and do my side of the chores. That was back in the '70s. I made 50 cents an hour, which came up to $7.50 a week from the neighboring farms. That was big money back then.

"There were two sides of the barn," he added. "I'd have to clean the gutters, feed the cows on my side, split their wood, fill the wood box every night or every other day. I walked a quarter mile, did the chores for two hours then came back home. Most of the time, I did my chores first and then got on the bus. I was big on trapping. I used to get up in the morning and run my trap line. I was big in mink and muskrat.

"I'd come home, run my trap line, eat supper and do our chores and the neighbor's. After that, I'd skin my rats then it was bedtime. Saturdays and Sundays we did chores and went to the woods to cut wood. We'd cut all day.

"The big difference was I was never forced to do it. I wanted to. My mother used to say when I was four years old, before I went to school, my dad would go to the woods and I'd jump up and down and be mad because I couldn't go with him. I was too little.

"On warm days, she'd send me and my big red bone dog out for a few hours. I could stay warm enough and then come home. At night, I'd have a fit. She wanted me to take a shower and go to bed. I wanted to be outdoors."

After graduating from Hopkinton Central High School in 1980, Bruce logged on a farm for about a year and a half before working for Byrns Dairy Farm for another 18 months.

That's when he decided to make a change.

"I wanted to get my degree in forestry and work in the woods, so I went into logging. I also wanted to be in management — timber, marking boundaries. So, I went to SUNY Canton for two years and got my liberal arts degree in 1985. Then I went to Wanakbnia Forestry in Keene, New York."

Bruce wanted to continue on to SUNY Syracuse, but everything changed with the birth of his first child.

"Instead of going to school, it was time to get a job. I had a job offer over in Green Mountains, New Hampshire. They called me on a Wednesday and asked if I could be there Monday morning for the job. I wanted the job so bad, but my daughter was just born and my wife and her were still in the hospital. I said, ‘Can you give me one more week? I want to get them home and settled in.' The response was, ‘If you're not here Monday morning, you won't get the job.' I made what I thought was the right decision. I still think it was."

Unfortunately, Bruce's dream job out of college wasn't meant to be. He would have been marking boundary lines, out on the woods every day. Instead, he was working on a farm.

"I tried to get into conservation. It was between me and another guy. He got the job because I didn't have a Class A license. That's when I went into logging for a few years. My first wife and I weren't getting along. One of my buddies was working for a window company in Connecticut and offered me a job. I needed to get away for a while, so I went to work installing windows in the West Point Military Academy."

Bruce worked there for three years before returning home. He logged again until 1996.

Fast forward to 2021 and Bruce's first year in office.

"I was deputy for six years doing a lot of the superintendent's job. He was supposed to retire last January, but he handed me the keys to the new trucks in October and said, ‘I'm not coming to work anymore. If you need me, call me.' The board asked me to take over. I was appointed in January 2021. I had to finish his two-year term."

Bruce prides himself on being a quick study. His years as deputy superintendent provided him with the foundation he needed to take over the helm as highway super.

Bruce is married to his wife, Kim. Together they have six children and 23 grandchildren. In his spare time, this super enjoys hunting, wood cutting and making his own maple syrup. He's also a member of the St. Lawrence Maple Association and the Southville Cemetery Association.

When asked if the job has been everything he expected or wanted, Bruce replied, "It's been more than that."

All in a Day's Work

"I have a good bunch of guys. We're like family. I'm their boss, but I also came from where they did so I can relate to what they're going through. I'm not going to stand over them if they run into trouble. I don't expect them to make the big decisions. That's my job. If they got a problem, call me. We'll walk through it.

"The biggest thing when I took over I said, ‘If you have a problem, we're working on a project. I want everybody's input because more minds thinking towards a common goal, everybody will have a good idea at some point. I'll listen to all of you. I may not do it your way but I'll listen.'"

As the department's top dog, it's Bruce's job to maintain the town's 317 lane miles of which 165 are gravel and 763 are paved. In addition, 132 of those are municipalities roads and those that the department maintains contractually for another municipality.

Most of the time you can find him working right alongside his four-man crew, running the equipment, driving the truck, whatever needs to be done.

"This winter, I either was driving big trucks, plowing what little snow we had or in the pickup plowing," he said.

Under Bruce's attentive eye, the town of Stockholm highway department runs on a total operating budget of $1,045,200, which includes salaries and benefits for employees and an annual CHIPS allocation of $200,000.

"We did some checking with the historical society. The tax assessor believes it was built in the 1950s, but nobody knows the exact date.

Bruce had no complaints about this past winter.

"We didn't go out and do much until after the first of the year. No freezing rain. It was very mild. We didn't get much snow. About four inches or so. Then it went back to bare ground."

Keeping the town's machinery up-to-date is one of Thompson's top priorities.

As prices continue to rise, how does Bruce budget for new equipment?

"After the first of the year, I sit down with some of the town supervisors and board members to see what I want to buy in the next few years so they know where I'm headed.

"We've also done well with grants buying equipment. Towns have been calling us because we've had great luck receiving them and getting a lot of money. They're like ‘we want to get on board.' It's a lot of paperwork, but we just got a $100,000 grant and that was our third one. It was for an excavator and a new plow truck. I also bought a huge trailer to move it around and kept our backhoe. Now we have two digging pieces of equipment so we can work on a road and do more.

"I bought a ditch and bucket and a thumb. We use it for cleanup on brush. We cut a tree down. It falls across the road. I cut the brush up, load it on the truck and haul it away. All five of us finished the job in four-and-a-half hours. Normally, we pile the wood, chip the brush. So much more manual work. So many more chances of accidents. It was so much safer."

As for his success? Bruce attributes it to one thing … people.

"I've developed a good working relationship with the board. They listen and understand my needs, especially when I explain in detail. My budget generally remains intact. I don't go overboard in my asking so the board doesn't usually cut anything out. I also have a well-balanced crew that works and gets along together. Between them, they have all the bases covered. That makes my job easier."

His wife, Kim, talks freely about her husband's job.

"I can see an incredible difference in my husband since becoming highway superintendent. He likes getting up and going to work. He talks about his day every night. I have seen and heard him talk to the public and try to take care of any issues they have with the roads or anything that may or not be on their list of duties."

About the Town of Stockholm

Stockholm is a town in St. Lawrence County, N.Y. The population was 3,665 at the 2010 census. The name was assigned by surveyors from Stockholm in Sweden.

The town is in the northeastern part of the county and is northeast of Potsdam.

Stockholm was erected from part of the town of Massena by a legislative act passed Feb. 21, 1806. It received its name by the surveyors from Stockholm, Sweden. It retained its original territory until April 9, 1823, when a part was annexed to Norfolk, and on April 15, 1834, another portion was annexed to the same town. During the War of 1812 some residents left the town and a lesser number returned.

The St. Regis River flows northward through the eastern part of the town.