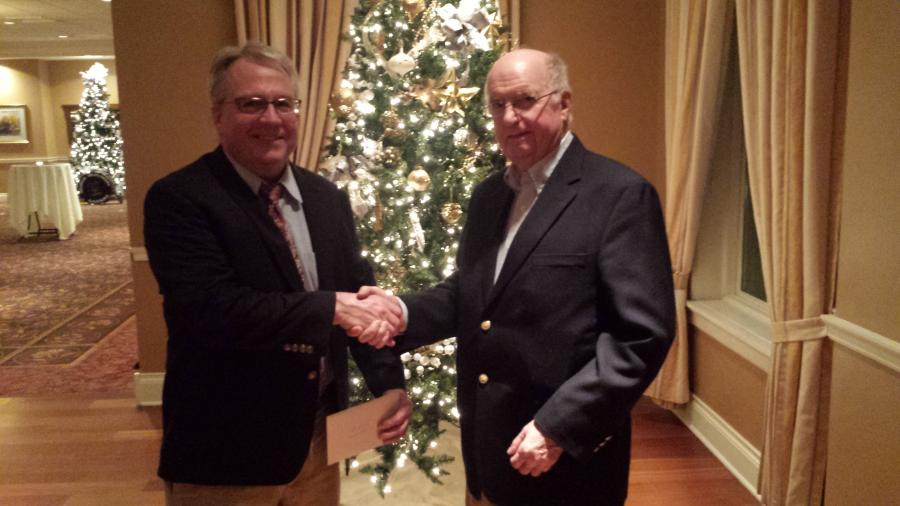 Tom Smith (L), 2015 president of IED presents Hugh Goulding, IED executive secretary, with a gift for his service to IED, and thanked him for his many years of service.

After a decades-long career, industry and U.S. Navy veteran Hugh B. Goulding is retiring from his position as the executive secretary of the Illinois Equipment Distributors Association. He will continue to run his company ETIP (Equipment Theft Information Program).

Goulding’s career began at Howell Equipment Co., Chicago, Ill., in 1952. The next year, he entered active duty in the U.S. Navy. Upon his discharge in January of 1956, he returned to Howell Tractor and served in the position of the service department office manager, and later in 1964, was promoted to used equipment supervisor at the Elk Grove Village, Ill., location. He was promoted to used equipment manager company-wide, and ultimately was elected as vice president, assistant general manager of Howell Tractor, responsible for all operations in 1971.

A career-defining shift came in 1975 and 1977 when Goulding was elected first as treasurer and later president of Illinois Equipment Distributors Association (IED). In 1977, while serving as president of IED, he introduced ETIP as an IED association service to help trace and recover stolen and missing equipment.

Goulding left Howell Tractor in 1978 and advised IED to take over the service operations of ETIP, but later the next year, the organization asked him and his wife Adrienne to incorporate the business. They took over the IED service as their new business. IED supported the effort, and contributed funds to help with the startup, and in 1979 accepted ETIP Inc. as the first associate member outside of financial and publication organizations.

Goulding’s involvement with the IED expanded in 1982 when the organization approached him to become the first paid executive secretary of the association. He accepted, and continued to operate ETIP Inc. as an independent organization. He has served in this position ever since, and will be retiring in January 2016.

During the recent IED membership meeting and Christmas party, Tom Smith, president of IED, thanked Goulding for his long service to the organization, and thanked him for the coaching given to him personally. Goulding thanked Smith and all the members who supported him through the years.