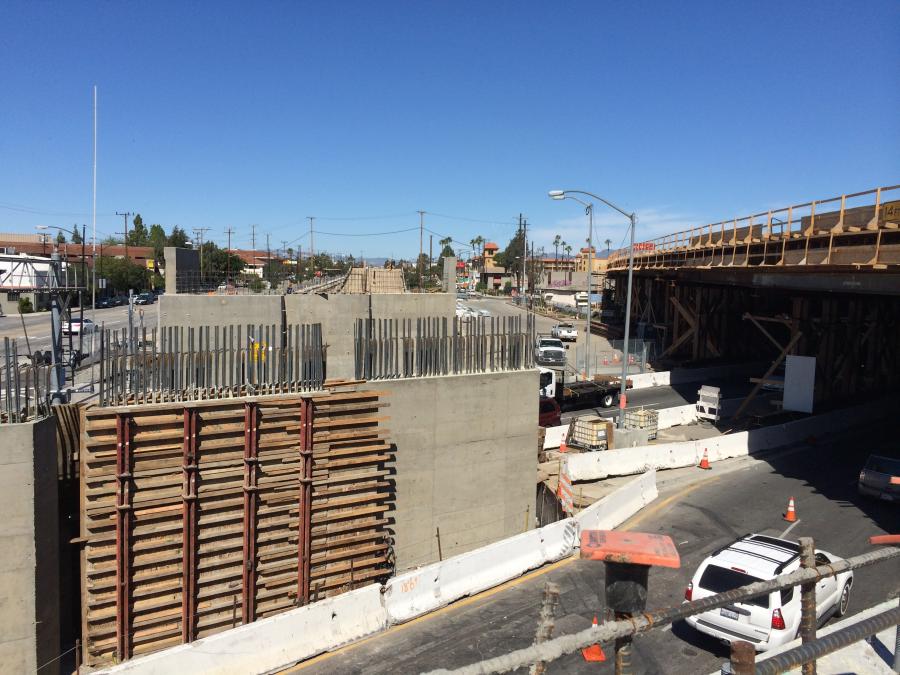 California’s much-used Interstate 5 in Los Angeles County is getting a makeover.

Los Angeles Metro, Caltrans and the Federal Highway Administration are partners in the I-5 projects, including those in Glendale and Burbank.

Once completed, the I-5 stretch will contain four to five regular lanes and one carpool lane in each direction.

Concrete, asphalt, steel, concrete and wood will be in heavy use during road and bridge construction for the two projects.

Security Paving Co. Inc. of Sylmar, Calif., is contractor for both projects. Caltrans served as the architect. Vladimir Gurfinkel is the construction senior manager.

The first project, now underway and set for completion in 2018, is on I-5 from the Ventura Freeway (SR-134) to Magnolia Boulevard, a 2.7-mi. (4.35 km) stretch. The project, estimated to cost $116 million, includes a bus-carpool lane in each direction.

A pedestrian walkway will be constructed near Verdugo Avenue.

Also, utility work is being done on southbound I-15.

Project benefits include improvement of traffic circulation along the I-5 corridor; encouragement of carpooling; enhancement of air quality; reduction of freeway noise in adjacent neighborhoods; safer driving conditions; and revitalization of the I-5 community in Glendale and Burbank.

The second project, known as the Empire-Burbank and Railroad Tracks Project, is also in progress. The estimated $355 million project is set to conclude in 2019.

Crews will construct bus-carpool lanes in each direction of I-5 and build a new interchange at I-5 and Empire Avenue.

They also will reconstruct the Burbank Boulevard overcrossing with a wider structure and realign the on-ramps and off-ramps. Finally, they will make improvements to the intersection of San Fernando Boulevard/Victory Place and Lincoln Street.

Railroad tracks will be elevated near Empire Avenue and at Buena Street and San Fernando Boulevard. A shoofly is being constructed to be used as a temporary train bypass during construction of the new elevated tracks.

A shoofly is a temporary short routing around a small construction site or other obstruction.

The project will enhance I-5 in Burbank and improve traffic circulation by adding carpool lanes in each direction. Interchange and intersection improvements are also expected to improve traffic flow.

Current I-5 construction from SR 134 to Magnolia Boulevard includes building of I-5 bridges at Western Avenue and Alameda Avenue, sound wall installation on southbound I-5 over the Los Angeles River and slope mulching for erosion control and beautification near Alameda and Verdugo avenues.

Current I-5 construction from Magnolia Boulevard to Buena Vista Street includes work at the Empire Avenue I-5 undercrossing. Crews are excavating material inside the tunnel and building a temporary support structure for bridge demolition.

Bridge workers are pouring the deck for southbound I-5 widening at the Buena Vista Street Bridge.

Also a steel bridge is being erected at the existing Buena Vista railroad underpass site.

The increasing use of Burbank's airport and construction of the Empire Center shopping center at the former Lockheed Martin site have put stress on the regional and local transportation networks, requiring measures to improve freeway access, efficiency and integration of a multimodal transportation system.

Currently, I-5 traffic is forced to use circuitous routes through residential and local city streets to reach the airport and other destinations. That has increased traffic congestion.

The project is designed to enhance I-5 through Burbank, relieve congestion and improve traffic circulation. It is also aimed at enhancing safety, encouraging carpooling and revitalizing the local I-5 community.

A Construction Zone Enhanced Enforcement Program was developed to help California Highway Patrol alert motorists of problems ahead on the I-5 freeway in Burbank. The CHP is often positioned at the beginning of a closure to slow traffic down as drivers approach a closure, especially in locations where workers are on foot in the work zone.

The plan also provides for assistance in handling traffic during construction activities if needed.

In addition, a traffic management team is available to respond to major incidents on the freeway and assist in managing traffic and planned lane closures.

Construction will be divided into seven stages to avoid long-term closure of ramps and to keep four travel lanes open in each direction of I-5. Plans specify that Burbank Boulevard can only be closed to traffic upon completion of the Empire Avenue diamond interchange.

This will minimize impact to drivers and businesses situated within or near the project area.

Some of the project work will take place during nighttime hours to minimize impacts to surrounding businesses and the public.

Safety will be enhanced at railroad crossings to prevent vehicles from stopping on the tracks or between the crossing gates when traffic is congested. Workers will place advanced warning signs, railroad crossing signs and flashing beacons at the railroad crossings. Flaggers and law enforcement officers may also be used.