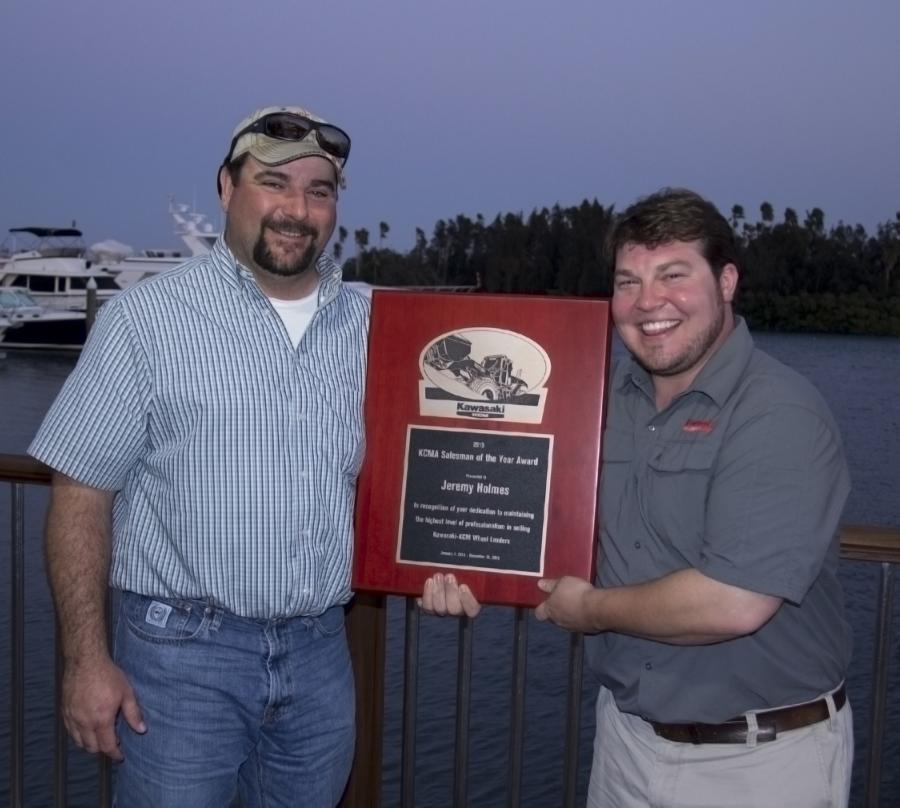 The winner of the 2015 Kawasaki-KCM Wheel Loader Salesman of the Year Award is Jeremy Holmes of Amarillo Machinery, Amarillo, Texas.

“Jeremy represents the characteristics KCMA looks for in awarding this honor,” said Gary Bell, vice president, general manager, KCMA Corporation. Holmes received his award during a corporate fishing outing he attended as a result of winning a contest for generating new business for Kawasaki-KCM wheel loaders.

“We don't necessarily select the top-volume salesman, rather we select someone who exhibits professionalism, skill and attitude. Jeremy always represents himself, his distributorship, and his manufacturers in the most ethical manner. Jeremy is a great representative of Kawasaki-KCM loaders, and we are proud to present him with this recognition.”

Holmes followed his Uncle, Richard Holmes, who was working with Amarillo Machinery back in 2012, into the industry. Holmes was not new to agriculture and construction equipment, having had a feed business and running agricultural equipment on his family's farm, so he felt comfortable from the beginning. While attending West Texas A & M, studying agriculture education, he worked for Texas A & M Agriculture Experiment Station, on the wheat breeding crew.

“My family has always had farms, so I got into the feed business. I hauled seed and put out cattle supplements. Then my brother-in-law and I got into the custom harvest business, and ran that for about 10 years, and got out due to the drought in Texas in 2012” said Holmes. “I started with Amarillo Machinery in 2012. They contacted me and I haven't looked back

“My favorite thing to sell is the wheel loader. I feel comfortable with a wheel loader because I know what the customer needs out of it, and I know what it will do. I know that my customers work 7/365. They expect their equipment to do the same,” said Holmes

“Every member of our team is totally customer service oriented, said Holmes. “We have an awesome shop that will work on any brand, and a great parts department that will do the same. There are no weak links in our dealership. We celebrate our successes together. I couldn't sell anything without all of the members on my team.”