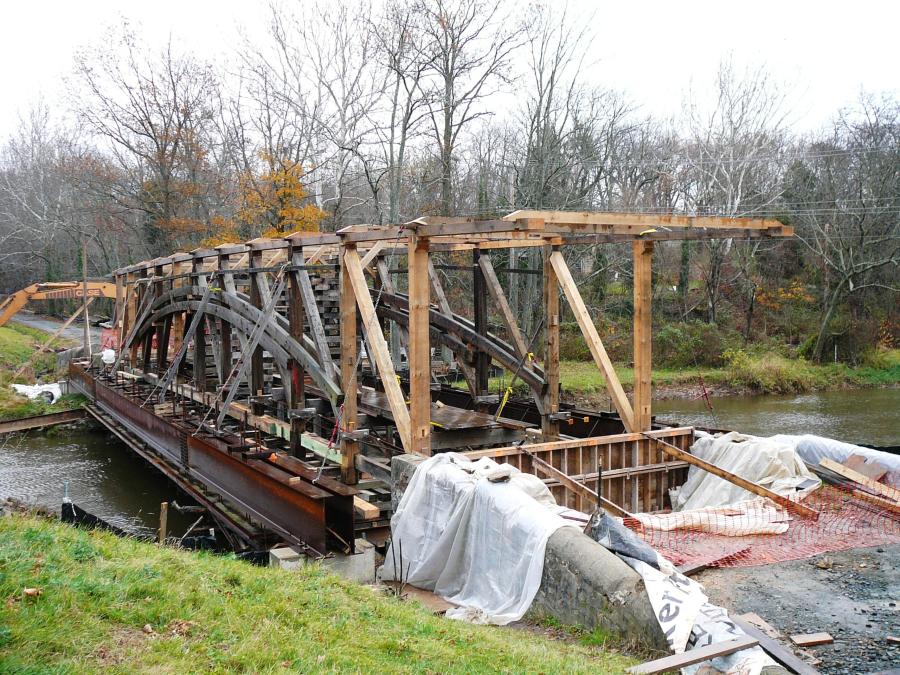 The Gilpin's Falls bridge was one of five authentic covered bridges worked on by Kinsley in the past 35 years.

The Kinsley Construction Heavy/Highway and Bridge Division has overcome virtually every hurdle imaginable over more than 40 years of rehabilitating bridges throughout the Mid-Atlantic region. From steel beam to prestressed concrete to steel girder to covered, there is hardly a structural type that it has not restored.

The Kinsley team has experience with multiple project delivery methods including design/bid/build, design/build, and best value for customers including federal, state, county and local government agencies, as well as private entities. Its crews and management team have the knowledge and experience to deliver large and complex projects, but are equally capable of quickly and efficiently mobilizing and completing small and short-duration engagements, according to the company.

There is no question that Kinsley's competitive edge is the craftsmanship and ingenuity of its people, according to Division Coordinator Fred Thompson.

“You can have the shiniest cranes and the biggest track hoes you want, but if you don't have the right people you're not going to survive,” he said.

“Our staff of supervisors, operations folks, and project managers readily outthink our problems and create cost-effective, time savings techniques that put our jobs ahead of the completion.”

While we rely heavily on our human capital, Kinsley also possesses a host of other distinct competitive advantages. For one, it works hand in glove with its fabrication shop to craft immediate solutions to unexpected challenges. Kinsley also has full immediate access to a comprehensive fleet of heavy cranes and specialty rigging through a partnership with Eisenhart Crane Service of York, Pa. This allows it to overcome any demolition or erection challenge that may arise.

Kinsley has tackled complex projects such as the phased replacement of a 305-ft. (93 m) long steel structure over the Swatara Creek in Middletown, Pa., which was slated for an October 2016 completion. The company's ingenuity was revealed in response to PennDOT's requirement of keeping one lane open during construction. The Kinsley team responded by designing and installing a temporary steel girder along the centerline to facilitate removal of the remaining members, and also realized cost savings by making use of steel beams from a previous project to fabricate and place the temporary girder system.

Kinsley understands the engineering of bridge rehabilitation down to the most minute structural components. Nowhere was that more evident than a project on S.R. 222 near the city of Lancaster where it was tasked with rehabilitating two bridges. It was discovered that the rocker bearings on one structure were in expansion and contraction mode and had rotated too far off their axes. The company designed a plan and jacked up a 755-ft. (230 m) long, multi-million-pound rigid frame steel beam bridge in order to replace rocker bearings, seismic plates, and disc bearings. The Kinsley team's engineering prowess and creativity resulted in another successful project.

The average bridge contractor would struggle to rehabilitate a covered bridge, but Kinsley thrives on these unique projects. There is no greater testament than the state of Maryland where Kinsley has repaired or rebuilt five of the six remaining authentic covered bridges over the past 35 years including Jericho, Gilpin's Falls, Utica Mills, Roddy Road, and Loys Station.

“It's a highly specialized animal for sure,” said Maryland Bridge Superintendent Greg Volpitta, adding that Kinsley's seasoned master technicians are key to getting the job done. “We have been able to retain the same core group of employees since 1982, which is integral to the procurement, performance, and ability to select the best subcontractors for specialty cover work.”

The Jericho Covered Bridge in Kingsville, Md., which was completed in Spring 2016, earned Kinsley repeated publicity in the Baltimore Sun in 2015. The scope involved the complete reconstruction of this 90-ft. (27.4 m) long covered bridge, which was originally constructed around 1865. The key to this project was finding a way to support the bridge while making extensive repairs to the timber structure. Kinsley's solution was to jack the existing structure off the abutments, roll it across the stream for repair, and reset the finished structure. When all was said and done, the timber superstructure had been completely rebuilt, the wood decking replaced, and the structural steel beams cleaned and painted.

The decision by public and private sector clients to choose Kinsley is not just about 40 years of experience, countless successful bridge rehabilitation projects, and multiple awards. It is more about what the Kinsley name has come to mean. The leadership of the firm, starting with Bob Kinsley himself, aims to “Set the Standard.” And the Kinsley team has done just that, time and time again, on each and every bridge rehabilitation project.

Reprinted from the 2016 /Volume 2 Kinstructor Newsletter