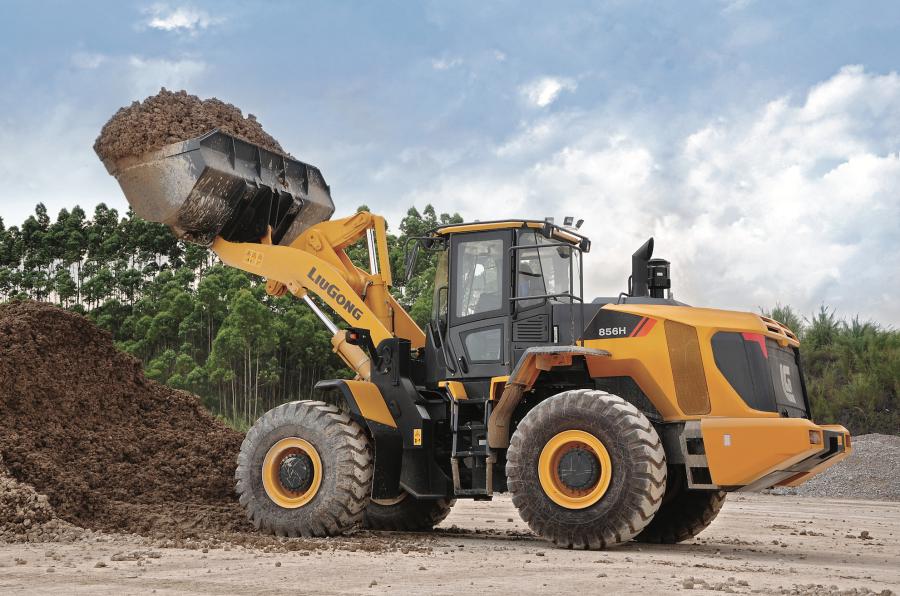 Among the first products tested at LiuGong’s core research center in Liuzhou, China, were the H-series wheel loaders. Auxiliary R&D units are located in Poland, India, Great Britain and the United States.

Mergers are not unusual in the global construction equipment industry, and LiuGong-Dressta is a prime example of the blending process. As director of the merged company's sales and marketing, Marcus Menough has the job of bringing together in the North American market the disparate parts of LiuGong and Dressta and growing the company's market share.

Menough knows a thing or two about moving heavy equipment. In a 17-year-career, he has sold Kobelco, Ingersoll Rand and Volvo construction products. In 2012, he jumped to LiuGong.

“When I was with Volvo,” he said, “I became familiar with Chinese wheel loaders and Chinese engineering. I came to see what I believed were many opportunities for Chinese products in this market. The company seemed really on track to make an impact here in North America. LiuGong is a large global brand and I took the opportunity to be a part of it.”

LiuGong entered the North American market in 2008, establishing its headquarters on the edge of Houston in Katy, Texas. It arrived just in time to watch equipment markets collapse here and abroad. The company might have hunkered down to wait for an economic recovery that, eight years later, still is problematic. Instead it looked to Poland in 2012 and acquired the Dressta line of equipment. That acquisition was a culmination of 40 years of evolution for the Polish manufacturer.

HSW is Dressta's foundation company. Its roots in Stalowa Wola, Poland, go back to 1938. In 1972, the manufacturer began building crawler dozers and loaders and pipelaying machinery for International Harvester. Ten years later, Dresser — another U.S. firm — entered an agreement with HSW. Six years after that, Komatsu America joined the venture. By 1995, the Dresser nameplate on the company's construction equipment had been dropped in favor of “Dressta.” Finally, in 2005, Komatsu pulled out and HSW assumed full responsibility for the product line.

This in turn set the stage for the takeover of HSW four years ago by Guangxi LiuGong Machinery, which is where we are today. Given this long and mixed pedigree of machinery, Menough was asked if current owners of the various generations of IH, Dresser and Dressta equipment should be concerned about parts and customer support.

“Absolutely not. Many Dresser machines are still running around in the market from decades ago and our goal is to support the full manufacturing base and its local parts suppliers,” he said.

To that end, he is working to expand the dealer network in the market — currently 13 dealers representing 70 locations. These include exclusively LiuGong dealers as well as LiuGong-Dressta outlets.

Menough was interviewed by Construction Equipment Guide while waiting in an airport. The sales director was traveling between San Diego, where LiuGong unveiled new Tier IV Final wheel loaders and excavators, and China, where a vertical-lift wheel loader was launched at a global dealer conference. The symbolism was unmistakable: This is a company on the move.

Some of its progress is powered by a state-of-the-art R&D campus erected last year in Liuzhou, China. The complex encompasses 1 million sq. ft. (92,903 sq m) of research and testing centers with enough working space for 1,200 engineers. The facility is LiuGong's core research center with auxiliary R&D units located in Poland, India, Great Britain and the United States.

One of the first products tested at the center was the H-series wheel loaders. Other new models entering the market include S-Series hydrostatic dozers powered by Tier IV Final Cummins diesel engines. H-Series loaders and E-Series excavators introduced in October in San Diego have Cummins and Perkins Tier IV Final engines under their hoods. Tier III-equipped machines will continue to be sold into 2017, when engines with the latest emissions equipment will take over.

CEG: LiuGong is introducing 20 new machinery models this year. Is that a typical year's introduction or a noteworthy surge?

Menough: It's definitely a surge. A lot of it is driven in this market by the Tier IV Final emissions requirements. All of the machines we are introducing here, 11 or 12 of them, are Tier IV Final. However, the new engineering facility in China is part of it, too. The center has been a catalyst for product introductions.

CEG: From a customer's point of view, what recommends the LiuGong-Dressta lineup of machinery?

Menough: I think the biggest piece of it for a customer is on the Dressta side. Obviously, the heritage of Dressta goes back to International Harvester a hundred years ago. It has a long history of quality production of heavy equipment and solid partnerships with dealers. On the LiuGong side is the manufacturing prowess of the Chinese. So customers get the best of both worlds: strong engineering in a full line of equipment and proven manufacturing power.

One of the larger adjustments for LiuGong in all of this is being able to offer dozers. The big boys in the industry have a lineup that includes dozers. With Dressta, LiuGong has a full range of dozers from a 100-hp rental tractor to full-blown 500+-hp machines, including mining units.

CEG: Has the merger gone well for the companies and their customers?

CEG: Do most of the products in the North American market trace their lineage to Dressta or to LiuGong?

Menough: Across the full range of machinery, it is mostly Dressta. Going back to International Harvester, the company has been in this market for more than a hundred years. Dressta is bigger and broader in terms of market offerings. But you also need to remember that LiuGong has 50 years of history, much of it in China.

CEG: How about globally — what is the premier machine for the company in worldwide sales?

Menough: Wheel loaders. The LiuGong line of wheel loaders is one of the largest in the world. It is always first or second in global sales.

CEG: The LiuGong product lineup seems a little thin on skid steers. One 7,800-pound, 70-horsepower model, the 385B, is offered. What are the company's plans there?

Menough: Actually there are multiple LiuGong skid steer models available, but they aren't offered in North America yet. They will be coming here in 2017. They are being tested in the global marketplace and will have a full launch next year.

CEG: Is LiuGong keying off one competitor or another in its North America marketing?

Menough: No, we're not keying off competitors. With the incorporation of the Dressta dozers, we have separated ourselves from competitors that don't offer dozers. We are relatively new in the North American market and are working to expand our position here, but our real emphasis is on being a global player. In Asia, we have a much larger presence and want to establish that here.

CEG: Is this a good time to be in an expansion mode? Is the market about to take off or is it still in a holding pattern?

Menough: Well, that's a great question. LiuGong has been in this market since 2008. Our plan has been to get established while things are a little slow and get ready to grow when things start moving faster. The markets have rebounded from 2008, of course, though they are not quite back to the pre-recession level. We have been looking for a one or two percent annual increase, year to year, over the next five years. By 2020, the market should be back and we should be in a much better position.

CEG: Have your projections of growth changed any following the election of Donald Trump, whose administration is apt to depart more from the policies of the current administration than might have a Clinton administration?

Menough: Yes, they've changed. I don't have any numbers to share, but the positive outlook from the market as well as statements about new investment in infrastructure are encouraging.

CEG: Is growth expected to come first in one or another part of North America?

Menough: We are experiencing real growth along the Eastern corridor and in the Southeast. The Southeast was one of the first areas to go into the recession and last to come out, but it is going strong right now. CEG