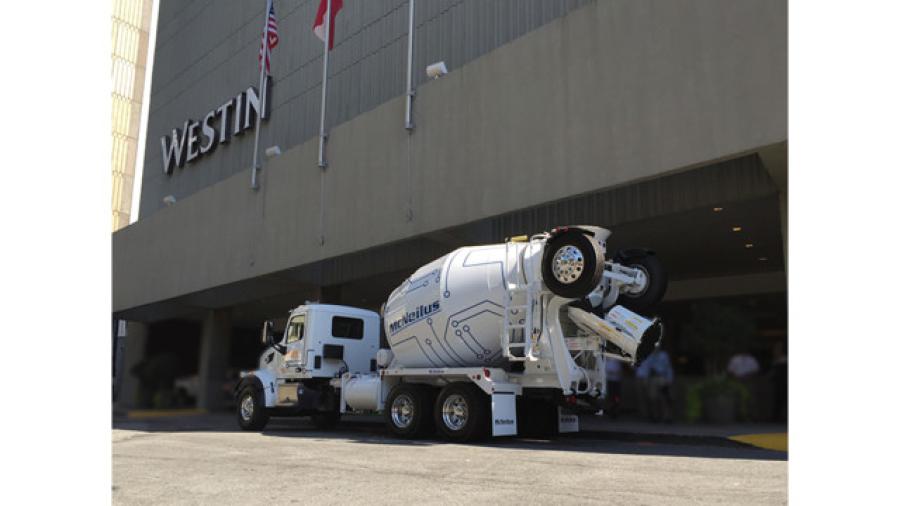 McNeilus Bridgemaster featured outside the Westin hotel in Atlanta, Ga., for the Command Alkon Conference.

McNeilus Truck & Manufacturing Inc. revealed its new mixer controls platform during the Command Alkon User Conference in Atlanta, Ga. McNeilus FLEX Controls are one of the most advanced control systems in the industry, with flexibility to meet any concrete producer's needs, according to the manufacturer.

“McNeilus FLEX Controls are the 'brains of the operation.' They are the new nerve center that meets the demands of your job today and seamlessly upgrades for the demands of tomorrow. Whether it's simple reliability or complex precision, our flexible system lets you add or take away functionality to meet your needs — so you can focus on getting the job done right,” the manufacturer said.

McNeilus FLEX Controls consolidate complete mixer monitoring onto one screen. With the new control system users have better control and less variability in loading, mixing, and delivering. The new smooth drum stop technology offers the smoother transitions from charge to discharge and stop/start.

“The new McNeilus FLEX Controls is a system that I have worked closely on with our development team. The key to this system is the flexibility,” said Tom Harris, vice president of concrete mixers of McNeilus Truck & Manufacturing Inc. “You can configure a simple system for one producer and an advanced system for technology driven producers.”

The launch of McNeilus FLEX Controls included an executive briefing to industry leaders, a featured McNeilus Bridgemaster mixer outside the conference hotel, two general sessions with truck walkarounds, and a fully functioning in-booth display for attendees to test out the new system.