Nepal Has Done Little to Protect Itself From Next 'Big One' 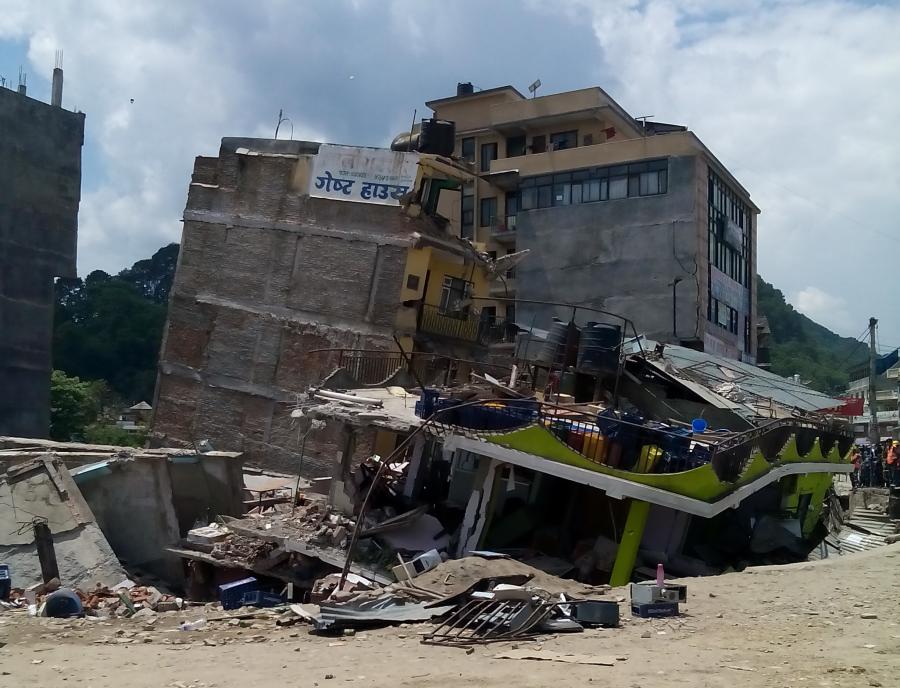 Image courtesy of Manju Shakya. This building in Kathmandu was turned into rubble due to devastating earthquake in April 25, 2015.

KATHMANDU, Nepal (AP) Last year's massive earthquake in Nepal killed nearly 9,000 people, yet could have been much deadlier. It was spared not by disaster preparedness, but by the calendar.

It hit on a Saturday. Most children were out of school, and most adults were working in their fields, rather than in the hundreds of thousands of buildings that were damaged or destroyed.

The Himalayan country can't count on that kind of luck next time, but since it's in the middle of a highly active seismic region, it can count on another major quake at some point. Yet experts say Nepal and neighboring India have a long way to go to implement earthquake-safe building practices.

Nearly a year after the disaster, Nepalese authorities have yet to announce new building codes.

“I haven't seen any significant initiative or change that would help the next time,' said Mattias Bryneson of the Plan International aid agency. The government has said more than 8,000 schools were damaged or destroyed in last year's quake. Still, “similar types of schools are still standing in other parts of Nepal,' Bryneson said. If a quake hit tomorrow and affected those areas, those schools could also collapse.

The next high-magnitude quake “is going to be a massive, huge disaster for Nepal,' Bryneson said. Similarly, Nepal also faces the threat of quake-triggered landslides, of which there were at least 3,000 last year, burying villages, blocking roads and ruining farmland.

The April 25 quake killed nearly 9,000 people in Nepal while damaging or destroying almost 800,000 homes. Another 102 people were killed on the Indian side of the border, where some 13,000 houses were badly damaged.

The Himalayas are result of smashing and buckling between the tectonic plates on which India and China sit. Since the 7.8-magnitude struck on April 25, 2015, in the central district of Gorkha, Nepal has been rattled by constant aftershocks.

Other quakes have hit nearby, most significantly a Jan. 4 rattler of magnitude 6.7 in the northeast Indian state of Manipur, and a 6.9-magnitude temblor on April 13 centered in the hills of neighboring Myanmar. Seismologists warn there are several places across the Himalayas that are overdue for a “big one,' possibly much stronger than last year's quake.

Some Nepalis are still afraid of moving back inside heavy buildings. Mahila Prajapati has lived with his family in a tin shed since their home crumbled in last year's quake, killing his uncle.

“I don't know if I will ever be able to move into brick-and-concrete house again. I saw many people crushed underneath piles of bricks. I still get nightmares,' Prajapati said. When he does go into buildings, the first thing he checks for is stairways and exits.

Others who have started rebuilding, mostly without government help, are doing what they can to make sure their homes are earthquake-safe. They are opting to build with bamboo and wood, more flexible and lighter than the stone and brick buildings that crumbled last year, causing most of the 8,856 deaths. They are building structures with fewer stories. And engineers must now sign documents declaring homes they plan to build are safe, or they won't be issued building permits.

“I am putting in more iron rods in the pillars, and have decided to limit the floors to two,' Kathmandu resident Narayan Maharjan said as he was shopping in a hardware store for supplies to rebuild his family home. “I will be able to sleep better knowing my family is safe.'

Though Nepal's long-dysfunctional government has much room for improvement in building safety, last year's quake did give it more experience in handling the logistics of search, rescue and immediate humanitarian aid.

“The earthquake was a big experience for us, and now we are better prepared for another disaster,' said Mahesh Dahal of the country's National Emergency Operation Center, set up in 2010 with U.N. funding to foster coordination among relief agencies. Since last year's quake, Nepal has set up five regional warehouses stocked with food and emergency supplies, as well as offices in all 75 district capitals.

The Red Cross has started training stonemasons, carpenters and community members in earthquake-resistant building techniques. But even that has stalled, since the agency must wait for still-unannounced building regulations.

“We are hoping that the government's priorities and perspectives on reconstruction will soon be clear so that we can help people to rebuild and get their lives back on track,' Max Santner, head of the Nepal office for the International Federation of Red Cross and Red Crescent Societies, said in a written statement.

In India, builders still routinely flout building codes and use substandard materials, leading to disasters like the deadly collapse — not earthquake-triggered — of an overpass under construction in Kolkata on March 31.

Settlements are still being constructed on marshlands — which are considered less stable on soggy, shifting ground — and overcrowding continues to be a potential problem for emergency vehicles should they be deployed.

“The government is in deep slumber on this front, and its approach is very bureaucratic,' said seismologist B.S. Bali, a professor at the University of Kashmir, in the Indian-controlled portion of the disputed Himalayan region surrounded by India, Pakistan and China. “We don't want to create fear, but the stress is building under the Himalayas, and an earthquake of magnitude 8 or 9 is already overdue.'

Kashmir also has a history of devastating quakes, including a 2005 temblor of magnitude 7.6 that killed more than 80,000 people and left another 3 million homeless.

“It's appalling that the government continues to be muted in its response despite impeccable research suggesting that the Kashmir Himalayas are a dangerously active seismic zone,' seismologist M.I. Bhat said. “There's no policy for ensuring construction of earthquake-resistant buildings.'

India also makes it difficult for scientists to study the quake potential, by refusing to share data with other nations, though seismologists say they already have enough to be clear about the risks.

“The political attitude to earthquakes in India has traditionally been to ignore future seismic risk if it gets in the way of progress, but to do whatever is considered needed if it doesn't,' said geologist Roger Bilham, a professor at the University of Colorado in Boulder who was denied an Indian visa in 2012 after conducting earthquake research in the country.

Meanwhile, India is fighting an insurgency in the portion of Kashmir it holds. In 2013, it published an advisory telling Kashmiris to be prepared for possible nuclear war with neighboring Pakistan by building bomb-proof basements and collecting two weeks of food and water rations.

“It's funny. The government wants you to be prepared for such a possibility, but it's missing its duty in preparing for the reality' of an earthquake, said Mohammed Abdullah, who teaches political science at one of Srinagar's state colleges.