Following its grand opening in May 2017, the district will be able to deliver improved service to the public. 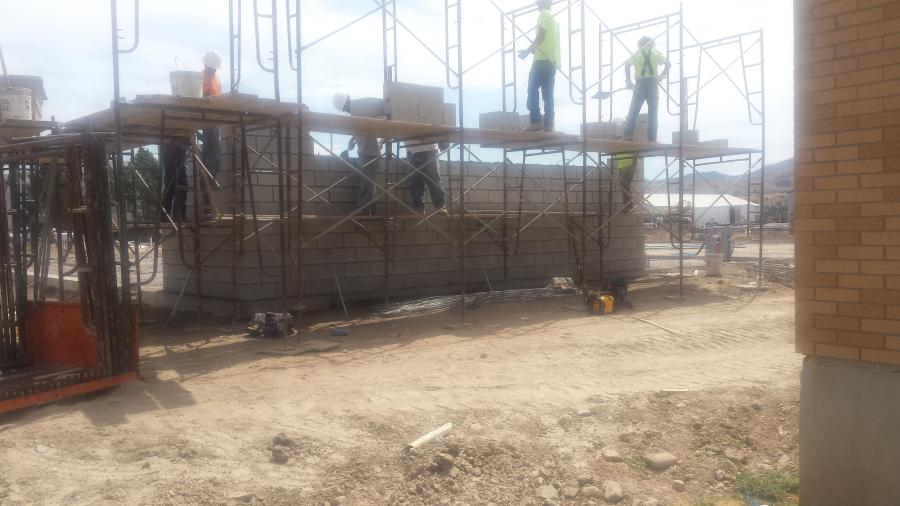 Idaho Division of Public Works photo. Masons are on site installing the concrete masonry units in several areas for the walls.

The Idaho State Police's District 5 is one of two districts that doesn't have all its divisions combined into one facility, but not for long. Construction of a new 23,300 sq. ft. (2,165 sq m) facility in Pocatello, Idaho, is under way, and following its grand opening in May 2017, the district will be able to deliver improved service to the public and foster a more cohesive team environment for its staff.

“Everybody is excited about moving into a new facility with its state-of-the-art laboratory,” said Captain Eric Dayley, commander of the Patrol and Investigations Divisions of District 5.

District 5's divisions — patrol, forensics services and investigations, along with peace officer standards and training — are currently located in three leased buildings spread across Pocatello. Over the years, the working spaces have been cobbled together to accommodate the district's staff and equipment, which hasn't resulted in ideal working conditions.

Dayley and his staff are located in a leased space within an Idaho Transportation Department (ITD) building and in leased space in the Garrett Freightlines Building, while the forensic lab is housed in the former city hall that was built during the 1950s. With its refrigerator unit downstairs and the sample processing area upstairs, forensics lab staff have to travel between floors to perform their work.

“It's not the best working environment for what our lab staff do,” Dayley explained. “It's really tight quarters and I even need someone to escort me around every time I go through there because it's a labyrinth with twists and turns.”

Although the need for a new combined facility was recognized nearly 10 years ago, the recession put its construction on hiatus until the economy recovered. And when the economy did recover, District 6 was actually higher on the priority list to receive a new facility; however, Dayley said that District 5's unsuitable lab space moved it to the top of the list. In 2015 the legislature approved an exploratory design phase, authorizing $600,000 to design the building, and the following year, they approved the remaining $5.4 million required for the construction.

Dayley credits the ITD for being a great partner in enabling the facility to be constructed. “They donated the land to us so that cut costs,” he said. “It's just really been a great thing and people have done a lot to make this happen.”

Boise-based CSHQA and Pocatello-based JHS Architects were awarded the bid to design the new building, and Dayley and his team had several meetings with the architects to provide input on the design.

“They were very good to work with. Although they had some misconceptions about how law enforcement runs, we just explained our needs and they designed around our specifications.” One of these specifications was having the evidence processing room accessible immediately through the back door and including a drug room in the evidence room that could be vented.

What Dayley is particularly pleased about in the final design is the district finally having its own training room. "Right now we don't have a training room; we have to borrow from other agencies around the city, and I anticipate the room also being available to other groups who would host events that are related to traffic safety," he explained

Other facility features include a conference room, break area, exercise room, secured parking and a secured outbuilding to house larger pieces of evidence.

The new facility won't be located far from the current building that Dayley works in, and he said that it's a good site because they will share the campus with ITD.

“The patrol division works closely with the transportation department,” he explained. “I wouldn't want to be far from them because we do coordinate many things, such as traffic issues, crashes, and winter maintenance, with them and it's great to have that face-to-face contact and be able to resolve issues that come up and plan for future things.”

Idaho-Falls general contractor Barry Hayes Construction LLC was awarded the bid. Dayley said that the building's footings and foundation have been poured, adding “we're seeing progress so we're excited.” A construction observation report by the Idaho Division of Public Works on August 10 reported that completing the backfilled work is under way and that the “surfaces below the slabs are being compacted.” Masons are also “installing concrete masonry units for the walls in several places and are installing the blocks in six section lifts.” Other progress notes include the underslab plumbing rough-in work being nearly completed, and the electrical contractor is installing the rough-in conduits.

Dayley expects that public will reap the greatest benefits with the new combined facility by being able to visit one facility to conduct business. “What's happening now is people will Google search Idaho State Police and the first one that comes up is investigations or forensics. Then they drive to that office and say they're here to pick up a motor collision report and then be told they're at the wrong place. They have to drive across town to the patrol office and pick up the report there.”

Yet not only will the public benefit with a combined facility. Dayley sees a greater exchange of ideas made possible because the district's 45 employees will all be in the same building.

“I think there will be a greater exchange of information and ideas because it's just a lot better to pass someone in the hallway and speak with them [rather than a phone call or email]. You can build relationships when you're in the same building.”

The facility was designed to accommodate additional employees if the District expands its staffing levels, and once the facility is completed. Dayley said, “I think people will have pride in the building. If you look at the artist's conceptions, it's a beautiful building. I think we've spent the people's money wisely.”