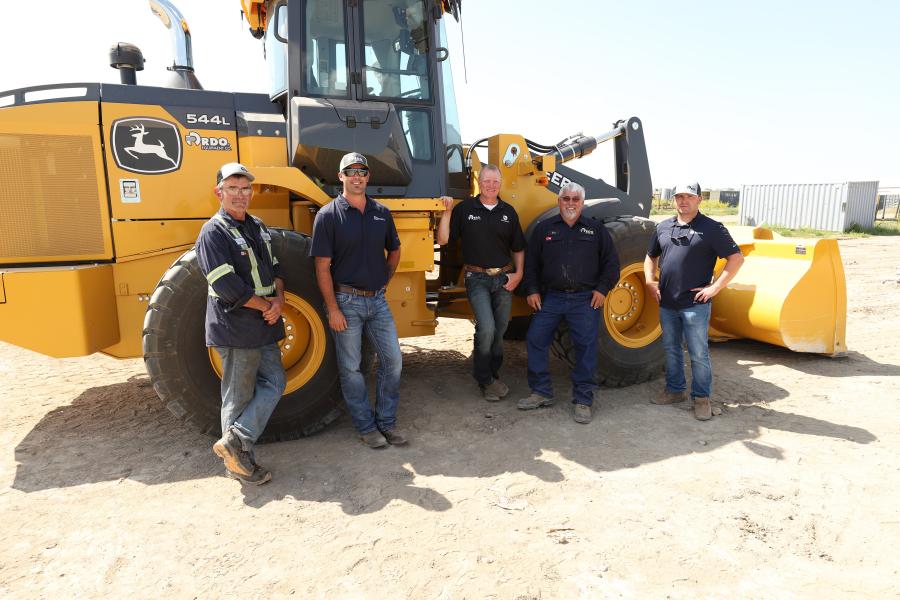 RDO and Power Fuels have been working together more than a decade. (L-R) are Doug Mutch of Nuverra; Jesse May of Nuverra; Mark Feland of RDO; Ken Weigel of RDO; and Joey Olson of Nuverra.

But not all milestones are celebrated in years. Especially when it comes to heavy equipment, machines are tracked, not by how old they are in years, but in the number of hours they've worked.

One of RDO's largest customers in western North Dakota reached an impressive equipment milestone this year that combines Deere loaders, a commitment to preventative maintenance and a partnership with RDO.

The Boom is Back

Badlands Power Fuels, a division of Nuverra Environmental Solutions, works with several companies in the Bakken Shale oil region near Watford City, N.D. While a global decline in oil prices caused North Dakota oil production to slow in 2015, after peaking in 2012, work has picked back up. 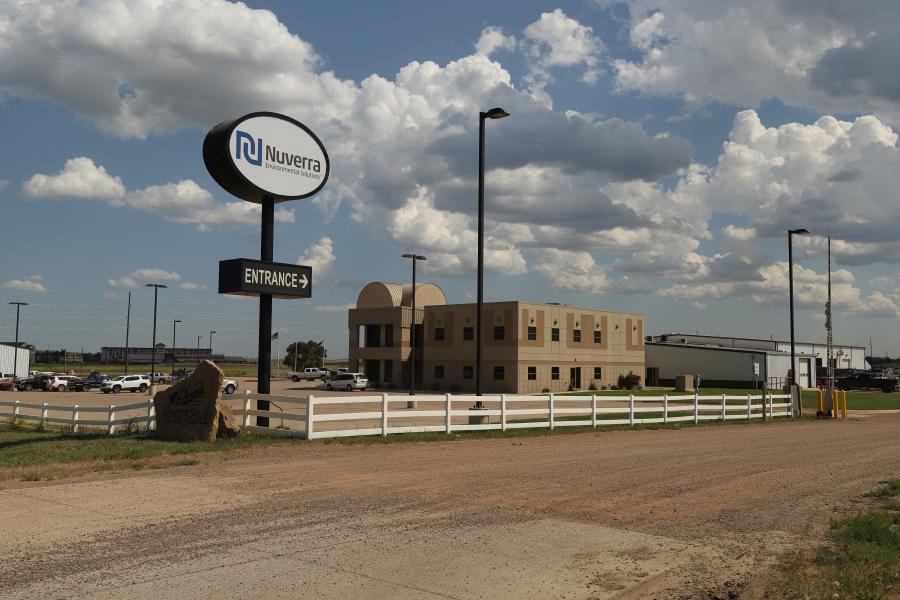 As Rentals Operations Manager, Joey Olson puts it, "The boom is back and it's booming big," meaning the companies working in the oil fields are running operations around the clock.

Also working nonstop in this 24/7 cycle is equipment. Power Fuels' rental division is committed to supporting its oil field customers who count on the company, first for machines, like Deere loaders and second, for maximum uptime of those machines.

And uptime would be an accurate way to describe the Deere loaders Power Fuels is providing to customers. In 2019, Power Fuels saw several of its Deere loaders reach a remarkable milestone: 30,000 hours of operation. Even those that aren't quite at the 30,000-hour mark are still going strong in the upper 20,000-hour range.

RDO and Power Fuels reflected on this milestone — which, coincidentally occurred in the same year Deere is celebrating 50 years of leadership in loader production — with a look back at how the partnership began, grew, and continues to thrive.

RDO and Power Fuels have been working together more than a decade, since before the oil boom reached its peak in 2012 and even still during the decline. 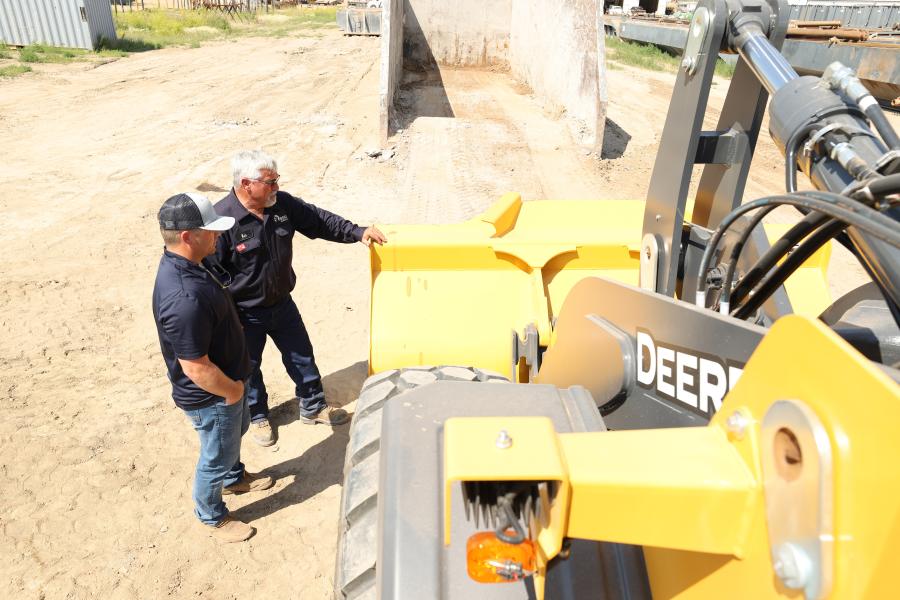 As the oil industry in North Dakota began to climb back, Power Fuels knew it had to be ready and made the move to build up its own loader fleet to be poised to meet its customers' demands. The RDO team set them up with a fleet of Deere J and K Series loaders, most of them 2012 models.

This is that same loader fleet, which consists of 74 machines, that today is still up-and-running, even with several now having surpassed the 30,000-hour mark.

What's even more remarkable about these loaders running strong at near-or-more than 30,000 hours? The demanding job sites on which they're working non-stop.

Loaders are a must-have on oil drilling sites. They move pipe and other materials and are used to keep the job site clean and free of obstruction from the team and equipment getting work done. They're subjected to tough weather conditions, work in challenging terrain, and run virtually non-stop. In short: they need to be tough to hang.

Referring to these Deere loaders, Olson said, "They're hearty machines. Other machines we've tested don't stand up to the conditions these machines are put in."

In addition to the strength of Deere machines, Heck is quick to credit Power Fuels' maintenance and rebuild program for the loaders' longevity, a program which she describes as, "top-notch and strict."

But, as with any type of equipment, at some point it's going to break down, which is why Power Fuels — and its loader fleet — also have benefitted from the parts and service partnership it has with RDO. 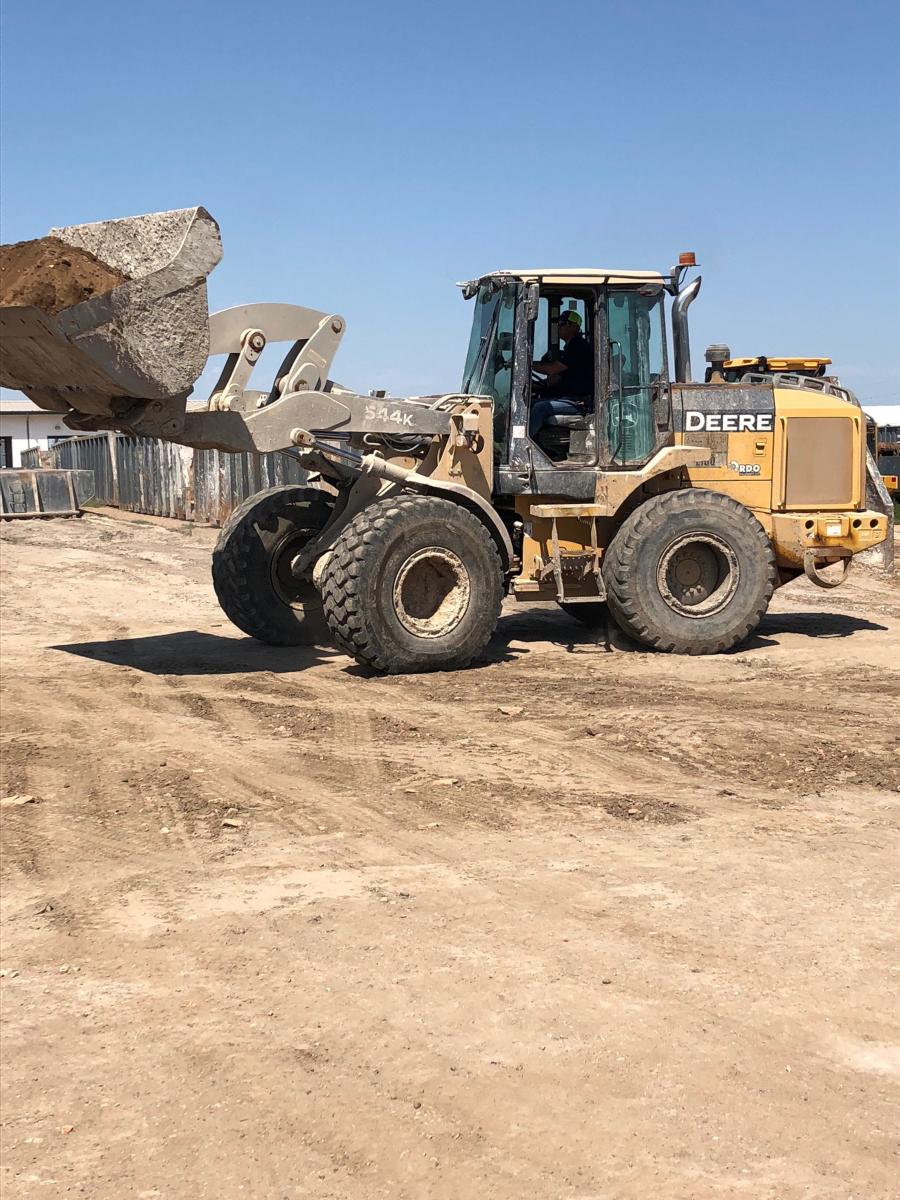 Ken Weigel, field service technician, based in RDO's Dickinson, N.D., store, has been a key player in the partnership, truly serving as an extension of the Power Fuels team. He works closely with Power Fuels' veteran service technician and together, Olson calls them, "the backbone," of their team.

"Wherever their machine is broken down, that's where I'm at," Weigel said with a smile.

Olson can attest to Weigel's comment, saying, "Nothing has stopped Ken from saying ‘Yep, I'll be there' when we've needed him. In fact, I'll never forget one especially crazy situation in the winter of 2010 that wouldn't have gone as well as it did if Ken hadn't been there with us."

A backstory note: One of the only times Power Fuels operates its own fleet vs. renting it to customers is for snow removal. During the winter of 2010, Power Fuels had many loaders dedicated to moving snow.

"That winter, there was a terrible blizzard," Olson continued. "We had our machines out, running non-stop digging people out of the snow. When a machine went down, Ken was right there with us, getting them back running so we could keep responding."

Taking personalized service to an even higher level, Weigel keeps his field service truck stocked with a parts inventory determined by the Power Fuels team so that, no matter the situation, no matter the issue, no matter the part needed, he has everything necessary to fix the problem and get the loader back up and running.

In addition to the time and dollars saved by having reliable parts and service support from RDO, Olson believes the real value comes in a simpler form: peace of mind.

"I can relax and know I'm sending out a piece of equipment that the customer is going to be satisfied," he said.

While it may be unfathomable to think Power Fuels' Deere loaders would ever crack the 40,000-hour mark, it's certain that the combination of Deere, Power Fuels, and RDO is one that could make it a possibility.