New York knows a thing or two about what it feels like to be snowed in, iced over or in the middle of a blizzard. 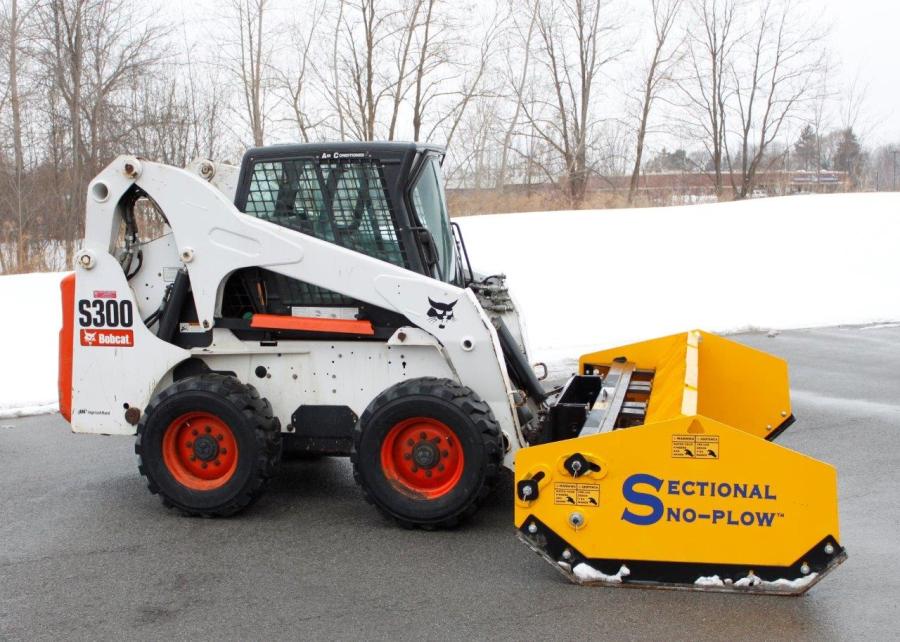 New York knows a thing or two about what it feels like to be snowed in, iced over or in the middle of a blizzard.

New York knows a thing or two about what it feels like to be snowed in, iced over or in the middle of a blizzard. The western region gets hit with an arctic blast usually once or twice a year, with regular bouts of snow and freezing rain in between. From as early as October to as late as May, depending on the year, residents, businesses and communities rely on snow and ice removal services to keep on keeping on with everyday life in spite of such frequent blustery, snowy and cold conditions.

R.M. Landscape Inc., based in Hilton, N.Y., provides snow-removal solutions to surrounding communities when flurries start. The family-owned company, operating since 1973, initially only offered standard landscape services, such as planting and mowing. In 1980, Rick Lemcke, R.M. Landscape owner, saw the opportunity to get into snow and ice removal services and grow his business.

“I now have about 90 employees,” Lemcke said. “Their dedication and long-term service really sets us apart as a company.”

Of those 90 employees, about half have worked at R.M. Landscape for more than 20 years. R.M. Landscape's employees' passion for managing snow adds to the company's overall success.

When providing services, Lemcke focuses on creating lasting relationships with clients. He credits his customers for respecting the industry and realizing how hard it is to properly manage snow and ice.

According to Lemcke, another key for success is evolving with technology. Until 15 to 20 years ago, the snow industry was stuck on hydro-turn plows and conventional salt spreaders. While that equipment gets the job done, it isn't as efficient as the newer, advanced snow pushers or plows. With traditional equipment, it might take extra passes to move snow or involve adding more salt to the area being cleared of snow and ice. Plus, traditional pushers or plows encounter more wear and require more maintenance than newer designs.

“One February, we were busy every day for the entire month,” Lemcke said. “When we have that many service days in a row, anytime we can get a piece of equipment that makes it easier or gets the job done faster with better results, we'd like to try it.”

Lemcke bought his first units from Arctic Snow & Ice Products about five years ago, after spotting the pushers at a tradeshow.

“When something looks innovative for the industries I work in, I like to be the first guy to try it. It shows that R.M. Landscape is a progressive company,” Lemcke said. “The sectionals are more expensive than conventional pushers, but the benefits outweigh those two-fold. That's why I'm stuck on them; they have a better total cost of ownership.”

“The price of salt boils down to supply and demand: The more brutal the winter, the more expensive the salt will be,” Lemcke said. In R.M. Landscape's coverage area, Lemcke has seen salt prices increase by $60 a ton over the past 10 years.

Lemcke called working with salt “a balancing act.” Applying too much salt leads to environmental concerns and is expensive. Not enough raises the risk of a slip or fall, which could lead to injuries and even a lawsuit for the business owner or landscape company. And with the importance of conserving enough salt to last throughout the winter season, snow and ice removal service providers have quite the list of challenges when it comes to salt.

“Our market receives 120 to 130 inches of snow every year, so we're used to it,” Lemcke said. “There are some areas that aren't used to that much snow; their biggest concern is 10 to 15 inches of snow, and that's the end of the world to them. That's where the salt is being diverted and why our costs go up.”

When salt prices are so high, re-pushing or applying additional salt is costly and inefficient for snow removal businesses. Arctic sectional pushers scrape better than conventional pushers or plows, virtually eliminating the need for extra passes and minimizing the amount of salt that needs to be applied. Since R.M. Landscape picked up Arctic sectionals, the company reduced its salt usage — and related expenses — by 35 to 40 percent.

“One peculiar thing about our market is it just keeps on snowing, and we just have to keep on pushing. If you let the snow build up and get hard packed, that's very detrimental and leads to slips and falls,” Lemcke said. “Using the Sectional Sno-Pusher, we can go out during the storm and scrape the surface clean, even after cars drove over it.”

“When we know it's going to get cold, we usually melt the ice using salt and don't normally push snow. But a majority of our snowfalls are 4 to 12 inches in accumulation, so we have to continually keep at it or let it build up,” Lemcke said. “By having pushers that scrape well, we can go through once and then we're done. We salt right away after scraping, which helps prevent snow from accumulating after we leave because there's no remaining snow for it to cling to. With a conventional rubber-edged pusher, it leaves a little film behind that halts how the salt works because the salt cannot pull heat from the ground efficiently.”

Lemcke finds Arctic Sectional Sno-Pushers' trip blades to be an incredible advantage when removing snow. The blades run across the pavement and if a section of the pusher hits an obstacle in the road, such as a curb or pothole, it will lift up and out of the way to avoid damaging the blade or the obstacle itself. “Say you have a very irregular parking lot, like many older industrial complexes seem to have — because the blades are 24- to 32-inches wide, they float and adhere to the surface better than traditional pushers,” Lemcke said.

He mentioned that the snow rolls over itself while the blade pushes it forward.

“When you gather snow with a conventional pusher, it will just keep boxing up in the pusher until you get too much and can't push it any farther,” Lemcke said. “With Arctic sectionals, because of the angle, the snow rolls in front of you and it keeps rolling over and over and allows more capacity to push piles farther, which means even fewer passes are needed to complete the lot.”

Lemcke also enjoys the ease of using Arctic Sectional Sno-Pusher's drop-and-go blade. The pushers' mounting bracket hooks quickly to the loader and floats up and down, virtually eliminating the need to tip it forward or backward.

“The Sectional Sno-Pusher is certainly easy for operators to use. Operators set the pusher on the ground and can go easily from there,” he said. “There's no constant adjusting that operators would need to do for a conventional pusher.”

The more snow on the ground, the more efficient Arctic Sectional Sno-Pushers become due to their drop-and-go capability. With snowstorms that only produce 3 inches of snow, operation time with a Sno-Pusher is about 10 to 15 percent quicker than conventional pushers, but in brutal situations — such as 20 to 30 inches of snow in a day — operation time is 20 to 25 percent quicker, allowing operators to get to the next customer faster or take on additional snow removal jobs.

“When you get that much snow, the benefits of the sectional pusher really stand out. It requires fewer trips and scrapes right to the surface,” Lemcke said.

R.M. Landscape does a majority of its snow removal services for supermarkets, banks and large plazas. But since adding Sectional Sno-Pushers to the equipment fleet, R.M. Landscape has added new markets and increased profits.

“Thanks to the Arctic Sectional Sno-Pusher, our business model is expanding and we're working our way into urban areas as well,” Lemcke said. This new market has added $150,000 to $200,00 to R.M. Landscape's revenue stream.

“We mount 8-foot pushers onto Bobcat skid steer loaders to clear small parking areas very quickly and efficiently and we don't have to follow it with a lot of salt,” he said. “Using a smaller pusher in really tight urban areas works great for navigating smaller spaces and plazas. And they work better than using a hydro-turn plow or straight pusher for removal.”

“We go from a couple of churches in the city, where we do maybe 50 to 80 car parking lots, then we go to a parking lot that holds 15 cars, and we're able to use the same equipment. That's a strategic advantage for us,” Lemcke said.

After investing in Arctic sectionals, Lemcke also noticed fewer maintenance issues, increased uptime and faster overall productivity on the job than he experienced with traditional pushers.

Although every pusher has wear items, such as the rubber or steel cutting edge, Arctic Sectional Sno-Pushers' common wear items seemed to be a higher quality than conventional pushers and were quick to replace.

“With Arctic sectionals if something is to break, it is very easy to replace because the sectional is built in smaller units. With conventional pushers, if you have a 16-foot pusher and the rubber edge gets ripped off, you would have to replace the entire 16-foot edge; with an Arctic sectional, if a cutting edge breaks, you would only need to replace the 32-inch section that was damaged,” Lemcke said. “There's hardly any maintenance to them unlike a lot of other pushers, and that's what makes it really nice.”

And for other maintenance issues or when help is needed, Lemcke said Arctic's online access to parts manuals and operational videos make staying up and running easy.

Due to its two-stage application of epoxy primer and acrylic urethane enamel finish, Arctic's paint also holds up a lot longer than conventionally painted pushers, ensuring its professional look even after multiple seasons. R.M. Landscape, for instance, has had their units for four or five years without a need to repaint.

The general nature of the snow and ice removal industry includes working in cold temperatures, blowing snow and long hours as well as being on-call when the snow hits. Lemcke believes in investing in anything that can make the job easier for employees — and that's why he trusts Arctic sectional pushers. R.M. Landscape now owns 13 Arctic Sectional Sno-Pushers ranging in sizes from 8-ft. up to 20-ft. (2.4 to 6 m) sectionals.

Although snow markets are diverse, Lemcke thinks snow industry professionals need to work together to provide the best possible service to customers, and one way is to share experiences with new technology. He believes the better snow removal service providers do as an industry, the more the profession will be respected.

“Anything we can do to raise our profession to the next level benefits us all. And that comes from everyone in the snow business doing the highest quality of work they can,” Lemcke said. R.M. Landscape serves western New York with that attitude in mind. The company passionately focuses on its services. R.M. Landscape takes pride in evolving with technology and investing in the important things, such as its employees and the customers it serves. According to Lemcke, the right attitude and the right equipment will equal successful snow and ice removal services — no matter what type of winter weather blows in.

For more information on Arctic Snow and Ice Products, call 888/242-3766 or visit www.sectionalsnopusher.con.