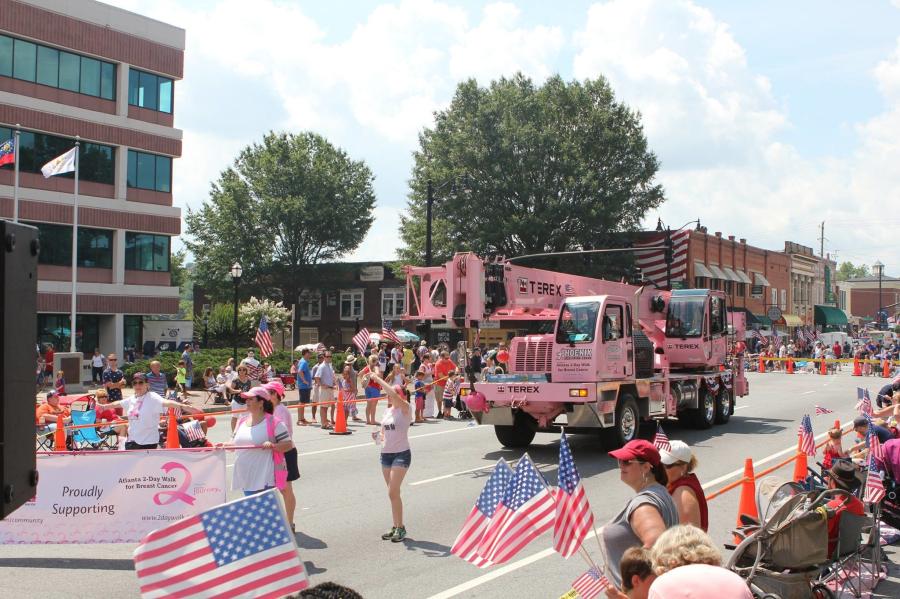 Stella, the Pink Crane, was commissioned in 2014 by Phoenix Crane Rental to help the company grow its business and to raise breast cancer awareness through the company's many charitable efforts.

Phoenix Crane Rental's Pink Terex T 340-1 truck crane, which has raised more than $125,000 for breast cancer programs in Georgia over the last two years, is scheduled to take part again in this year's “Atlanta 2-Day Walk for Breast Cancer” on October 15-16, 2016.

The walk is produced by It's The Journey, Inc. (http://itsthejourney.org/), and the Pink crane, also known as “Stella," has been part of the event three years running. Once again, Stella will take part in the walk's opening ceremonies with thousands of Georgia residents in downtown Atlanta. It is just one of several charitable events that Mableton, Ga., based Phoenix Crane Rental and Stella participate in each year.

Stella, the Pink Crane, was commissioned in 2014 by Phoenix Crane Rental to help the company grow its business and to raise breast cancer awareness through the company's many charitable efforts. The crane is a favorite among the company's customer base — often specifically requested to work on projects. That level of notoriety keeps Stella and her operator, Jessica Ives, busy seven days a week.

And, while most weeks Stella can be found around the Atlanta area, lifting HVAC equipment or setting trusses for commercial and residential developers, Stella and Jessica have performed a few unique jobs over the years. “From lifting Chick-fil-A cows onto billboards to being specifically requested for filming a movie, Stella has done it all,” says Mike Phillips, president of Phoenix Crane Rental. "In fact, our pink crane was on the set of Tom Cruise's film 'Mena.' Over the course of a week, Stella and Jessica hoisted up a plane during a key scene for the film. It was a first for the crane and our company.”

Phoenix Crane Rental generously donates a portion of the Pink Crane's hourly rental revenues to It's The Journey. In addition, the company frequently donates the use of the crane and its operator's time to other charitable events throughout the year. Stella and Ives were part of the festivities for the Quarry Crusher Run Atlanta at the Vulcan Quarry in Norcross. It was a featured “truck” at Kennesaw Touch-a-Truck Event that gave families a chance to get a closer look at this one-of-a-kind crane. And, Ives drove the crane in the Marietta Freedom Parade on July 4th. After the parade, organizers asked if the Pink Crane can be used for Marietta's New Year's Eve Ball Drop — Ives, of course, said “yes."

Leading up to the Atlanta 2-Day Walk for Brest Cancer, Phoenix Crane Rental will hold its second annual Crane Rodeo on October 9. The event is expected to attract employees, friends, family and the community for a day entertainment. All net proceeds raised from sales of raffle tickets, drinks, food and event apparel will be donated to It's The Journey. Last year's event was a huge success, and event organizers are expecting an even bigger turnout this year.

“Our Pink T 340-1 truck crane is an important member of our fleet of cranes,” adds Phillips. “Not only has it helped us raise awareness and money for breast cancer prevention and research, but it's also a versatile unit that can travel to and from jobs quickly to maximize our return on investment.”