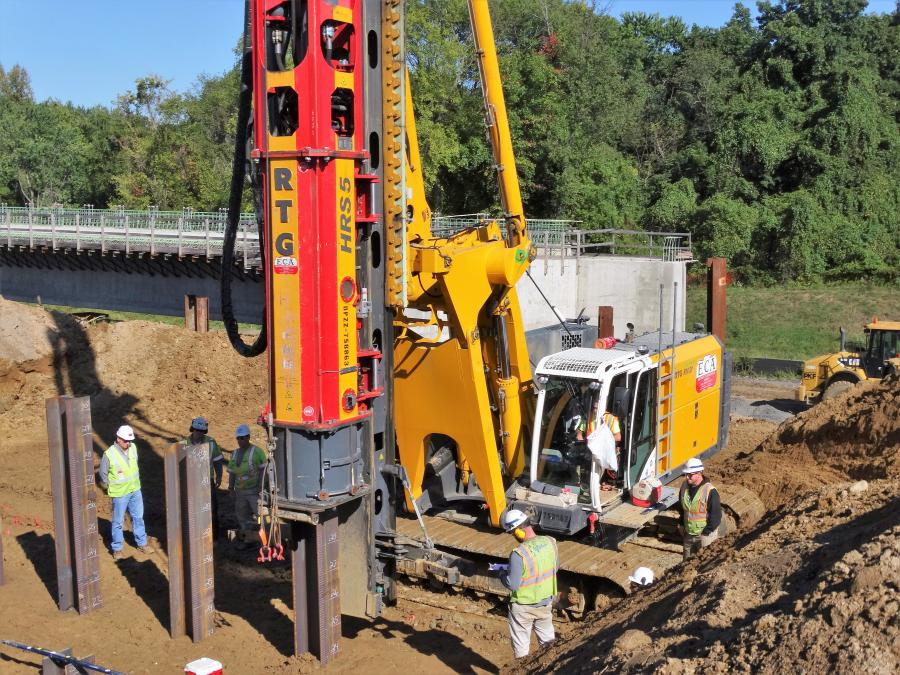 An RTG RM 20 pile driving rig hammers battered piles in the shadows of a Pennsylvania Turnpike bridge abutment on a narrow strip of land between an embankment and a roadway on a warm October morning in 2016. Upon driving an H-pile to refusal, the operator deftly executes a 180-degree turn within a confined space and crawls a short distance to retrieve the next sheet pile. A worker from PKF-Mark III hooks it up, the rig lures and secures it, and then travels back to the work site. The mechanical process repeats itself over and over, indicating that serious productivity is afoot.

The RM 20, preceded by the RG 19 T on the PA Turnpike/I-95 Interchange Project, represents the willingness of a forward-thinking contractor to break with tradition to install bridge foundations. PKF historically relied on a crane-suspended pile hammer. Its decision to rent pile driving rigs from Equipment Corporation of America (ECA) is paying off with doubled productivity, reduced labor, increased safety and cost-savings.

Interstate 95 from Maine to Florida was completed in 1969 with no connection to the Pennsylvania Turnpike. Since that time, motorists have been forced to navigate crowded backroads to transfer between highways. The PA Turnpike/I-95 Interchange Project — jointly owned by the Pennsylvania Turnpike Commission, Pennsylvania Department of Transportation (PennDOT), and Federal Highway Administration (FHWA) — will create the missing link.

Newtown, Pa. -based PKF has been plowing through Section D10 since being awarded the $142.9-million contract in August 2014. The firm is working aggressively to finish construction by October 2017. The contractor's scope includes reconstructing and widening 2.5 mi. (4 km) of the Turnpike in Bucks County; building piers for the 14-span I-95 flyover ramp; replacing three mainline bridges; constructing a four-span bridge; and repairing two bridges.

This project has special meaning to PKF as a local contractor, according to Vice President Larry Keough.

“It's one of those signature jobs we've been focused on for many years,” he said. “To have the privilege to be the first one out of the gate is pretty impressive.”

Piling Superintendent Sabrina Villanti sits in a job trailer rattling off details on bridges as if she keeps a set of plans in her head.

“All of our piling is in the main five bridges on this contract,” she explained over the muffled pounding of the RM 20 just outside.

PKF has relied on a crane-suspended vibratory hammer with leaders since being founded in 1969. Breaking with tradition on a megaproject by switching to a pile driving rig might seem risky, but PKF planned it carefully.

Keough clearly recalled the events leading up to the decision. The schedule dictated that PKF would need to run three pile driving operations concurrently. At the time, it was running two crawler cranes with vibratory hammers and the RG 19 T with a vibratory hammer. PKF considered renting a third crane and even purchased a second hammer.

“We were seeing productions that were leaving the crane-suspended vibratory hammer in the dust,” Villanti said of the RG 19 T. “We were doubling, if not tripling production, based on how many sheets we could drive in a day.”

PKF's interest in the RM 20 had been piqued in Winter 2015 during a demonstration at ECA's Aldan, Pa. location. Although there was no need on the PA Turnpike/I-95 Interchange Project at the time, PKF was impressed. ECA's New York/New Jersey Regional Sales Manager Bruce Langan arranged for the contractor to test the RM 20 on another project.

The RM 20 took center stage in August 2016. PKF's decision to scratch the itch and try out ECA's RM 20 paid off. Its ability to double production allowed the contractor to eliminate the third set-up altogether. The contractor further capitalized by putting the unused second crane to work with a crew of carpenters.

“The RM 20 has essentially doubled my production,” said Keough, “hence, I didn't need a third set-up.”

The RM 20 also reduced manpower. The traditional set-up requires a crane operator supported by a full crew of pile drivers whereas the RM 20 requires an operator and a two-person crew.

The crew has adapted well with the RM 20 as the centerpiece of the pile driving operation. PKF has two operators, neither of which are piling rig operators.

The self-sufficiency of the RM 20 eliminated the need for one of our key foremen, according to Keough.

“The RM 20 is so self-sufficient you don't need a key foreman,” he said. “You just need one person on the ground and another feeding the machine and that's your crew.”

The primary operator boarded his first RTG pile driving rig in summer 2015. ECA dispatched Langan and an ECA factory-trained service technician to the site at the outset to train the crew on the RM 20 set the pace for a smooth transition.

“Given his experience with the previous machine [RG 19T] it only took him a couple of days to get acclimated,” Keough recalled, adding that ECA's support was key.

“He felt comfortable having a phone number he could call and get all of the information and make sure he was doing all the right things.”

“There's no question we're crushing our labor production numbers,” Keough said. “To drive piles the conventional way versus the RM 20, it's cheaper to go with the RM 20 even with the price of the rental.”

The RM 20 gave PKF the ability to double production, but the onus was on its crew to maintain a steady supply of piles. Keough and the crew, recognizing the rig's hyperefficiency, dubbed this process “feeding the beast.”

It required both physical and mental effort for PKF's crew. While the piles arrive on site marked with driving depths, they do not always match the supplied borings. It requires the team to choose and manage piles based on how the others are going in to avoid waste.

PKF was accustomed to being able to revisit driven piles before splicing because the hammer with leader dangles overhead and can be repositioned. Using a track-mounted machine like the RTG required careful selection of pile sizes and immediate splicing in areas where driven piles were clustered several rows deep. PKF rose to the challenge as evidenced by the crew's production rate of up to 20 piles installed per day.

The RM 20's productivity dazzled PKF regardless of whether the piles were plumb or battered. The RM 20 can effectively drive battered piles because of its adjustable leader, which can tilt backwards 45 degrees, and forward and sideways 18.5 degrees. The high turning point of the mast provides stability in even the most extreme inclinations.

A New Level of Accessibility

Upon evaluating the positioning of the piers and abutments, in addition to the topography, PKF recognized that positioning the crane at street level to service the pile driving operation presented challenges. The RM 20's ability to maneuver on the job site proved essential.

“The RM 20 is perfect for this project because you have high mobility in a confined area,” explained Sales Director North America Dirk Himborg of Rammtechnik, GmbH. “The rig has the option to be fitted with a hydraulically-driven mast foot and back jack-ups to facilitate lifting and rotation of the undercarriage, which is especially helpful on uneven surfaces and confined work spaces.”

It was not just the RM 20's confined space functionality, but also its ability to navigate challenging terrain, especially mud. While a crane could have been positioned to avoid the mud altogether, the problem on PA Turnpike/I-95 Interchange Project was that there was often nowhere to position it.

Villanti recalled an instance where PKF needed to relocate the pile driving operation to the other side of a bridge with a 13 ½-ft. (4 m) clearance. The operator hydraulically tucked the RM 20's mast down and crawled underneath. Breaking down and relocating a crane would have been cost-prohibitive.

PKF had been using the RG 19 T piling rig with a vibratory hammer in summer 2015 before the RM 20 with an HRS 5 accelerated hydraulic hammer took up a permanent position on the site. The RG 19 T was driving sheeting and soldier piles for non-load bearing applications, but traffic was shifted onto newly constructed facilities in September 2016, prompting the need for a different approach.

“This is an accelerated hammer so whatever position you have you get a double push,” explained Himborg. “It gives the ram weight not only an up push, but also a push down so you don't lose any energy. You're not relying strictly on gravity.”

The HRS 5 delivers up to 53,104 ft. -lbs. PKF especially appreciated the ability to adjust the energy going into the hammer with the flick of a thumb.

The HRS 5 not only delivers a higher percentage energy transfer than a traditional diesel hammer, it also is faster, delivering 50 to 170 blows per minute. The rate was so rapid that the onsite PennDOT inspector had concerns about being able to keep track of the pile count. Fortunately, the RM 20 records the count, which alleviated that issue.

The added power of the RM 20 with HRS 5 facilitated compliance with an aggressive PennDOT specification, which requires 20 blows per inch to refusal on bedrock. PKF was penetrating a silty sand surface, underlain by a tougher layer of saprolite, which varied in depth. PKF drove 14 x 89 H-piles to dense bedrock at 12 to 80 ft. (3.6 to 24.3 m), although 35 ft. (10.6 m) was the average. Piles were capped with a heavy-duty steel tip for added penetration.

PKF was driving piles with hammers and leads from 7 a.m. to 10 p.m. Despite its respect for local noise ordinances, Keough admits that some nearby residents expressed concern.

“When we switched to the RM 20 there were no complaints even though we were closer to the neighborhood,” he recalled. “You can stand 30 feet away from that hammer [HRS 5] and not wear ear protection, whereas you couldn't do that in the traditional setup.”

“It's much quieter than any traditional pile driver out there,” added Langan. “There is a noise percussion system built into the hammer to eliminate the ring I call the church bell sound when you hit steel on steel.”

PKF and ECA have enjoyed a 20-plus year relationship. “We've bought a lot of equipment from ECA over the years,” Keough said. “The one thing that we know after using the RG 19 T and the RM 20 is that given the right circumstances there's no question we would purchase those units in lieu of the traditional crane, hammer and leads.”

And the opportunity is likely to increase. PKF, once focused only on self-performing its foundation work on its heavy/highway construction projects throughout eastern Pennsylvania, New Jersey and northern Delaware, will now provide this work as subcontractor. Based on its successful switch on the PA Turnpike/I-95 Interchange Project, the odds look good that the fleet will include RTG pile driving rigs.

Brian M. Fraley is the owner and founder of Fraley Construction Marketing .