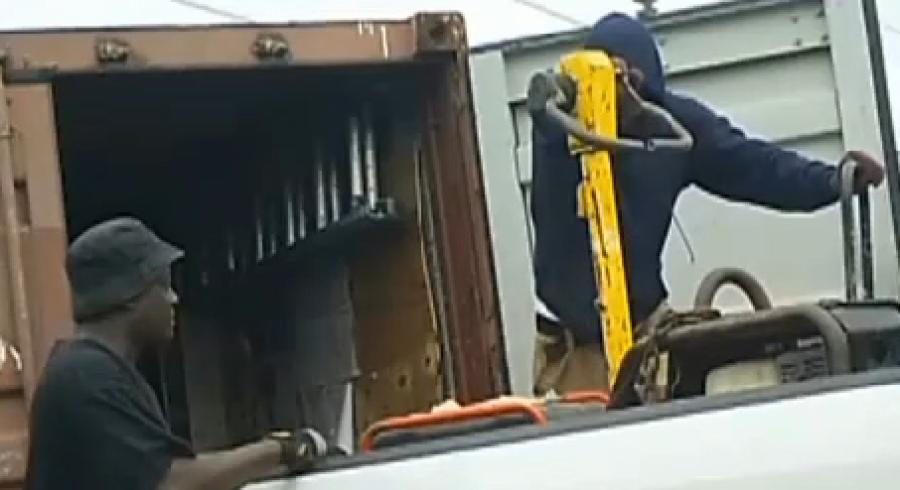 Surveillance cameras at the business were rolling and caught the truck the burglars arrived in, catching one of the suspects.

Local Miami News affiliate WSVN is reporting that a man was arrested, Monday night, after allegedly being connected to a string of stolen construction equipment in Broward and Miami-Dade counties.

Surveillance cameras at the business were rolling and caught the truck the burglars arrived in, catching one of the suspects. Officials said the suspects would pop locks on storage units that contained construction equipment.

Construction business owner Sierra Evans tallied up all the equipment that was stolen from her company in Dania Beach. "We come into work on a Monday morning, and unfortunately, everything's gone," she said.

According to Evans, her Ocean Bay Construction company has been hit several times within a few months. Close to $30,000 worth of equipment was taken, which prompted them to install HD cameras in case the crooks came back for more. Lo and behold, the cameras captured the men at work.

7News aired the story last week, and a viewer recognized one of the men and called Crime Stoppers. Twenty-five-year-old Dwight Pearson was taken into police custody thanks to the tip.

Evans is thankful for that good Samaritan who turned Pearson in. "It's hard on a company to lose that kind of equipment, and it hurts with production, it hurts the projects and the people that we're impacting, so thank you to whoever came forward and turned that person in," she said.

Broward Sheriff's Office deputies said they found an extensive amount of equipment at Pearson's home. Detectives believe they can tie him to more than half a dozen burglaries across Miami-Dade and Broward counties.

Sirocco Marine is another business that was hit for their supplies. "I'm really happy that Broward County was able to catch him," said business owner Boyd Tomkies. "I'm pleased that the system worked."

His inflatable boat business in Dania Beach was robbed the same day as Evans's business. The burglars got away with $7,000. "This is a new business for me in Florida, and it's happened twice in three months, so it leaves a bad taste in your mouth," Tomkies said.

The latest burglary was at Tower Power in Pompano Beach, and surveillance also captured the scene as the white pickup truck pulled in and raided a work truck adjacent to them before taking whatever equipment they wanted and leaving.

According to officials, Pearson confessed to stealing and reselling the items. "The suspect gave a confession to what he did," said Broward Sheriff's Office Sgt. Kenneth Bowermaster. "He's part of a crew working between North Dade and North Broward counties, stealing from construction sites. We have a second suspect identified. We're currently looking for him now."