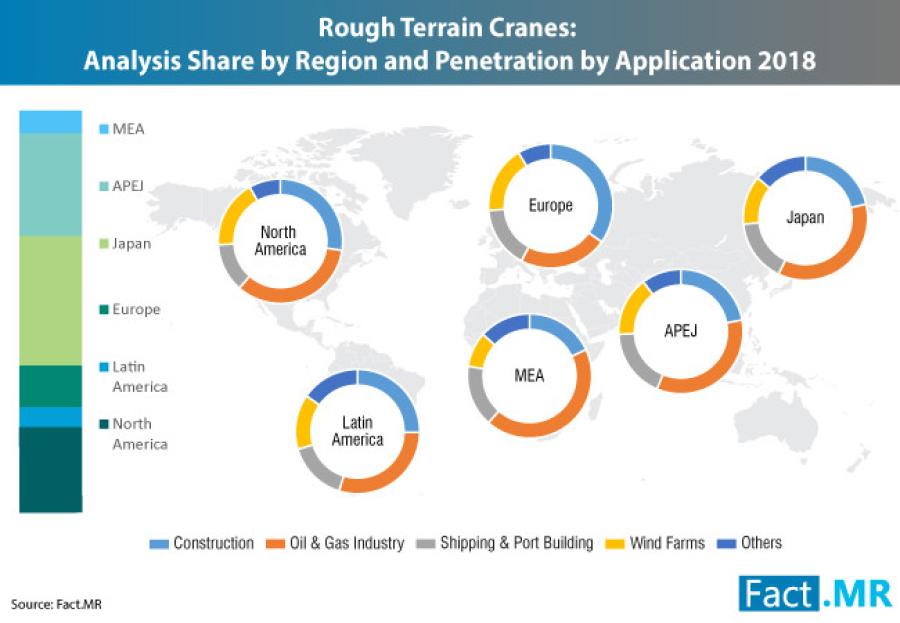 More than 4,700 units of rough terrain cranes will be sold in 2018 and the market is likely to witness a steady growth with 3.7 percent Y-o-Y in 2018 over 2017, as per Fact.MR valuation. Overall growth of the rough terrain (RT) crane market can be attributed to,

"After a significant period of stabilizing demand, the rough terrain crane market is coming to the fore and witnessing a steady progress. As the governments emphasize on capacity expansion of the utilities sector and infrastructure development, demand for rough terrain cranes has witnessed a constant upward trend in the past decade and a market of nearly $2,400 million is anticipated in 2018," said a senior analyst at Fact.MR.

According to the study, the sales of rough terrain cranes with up to 38.6 tons (35 t) lifting capacity will witness a surge of nearly 60 units in 2018 as compared to the previous year. Increasing demand for compact yet efficient heavy duty equipment in the construction sector has led to the significant adoption of up to 38.6 t RT cranes.

Demand on the Rise

RT cranes market continues to witness growing demand in oil and gas industry. Fact.MR study finds that the oil and gas industry will hold over one third sale of RT cranes in 2018. The higher demand can be attributed to increasing efforts of rental companies and original manufactures for market share expansion.

Demand for RT cranes in the construction sector, is expected to follow the oil and gas industry wherein steady development in the construction sector across global countries will lead to sales of more than 1,080 units in 2018. Growing government emphasis on renewable energy generation is expected to be the prime factor responsible for the rapid growth of RT cranes market in wind farms at over 4 percent Y-o-Y in 2018 over 2017.

The study estimates that Japan, with the headquarters of leading manufacturers in the rough terrain crane market, will continue to occupy nearly one third of the market share in 2018. Manufacturers such as Tadano and Kobelco are making greater strides in the RT cranes market by capacity expansion and increasing global footprints.

The study shows that APEJ closely follows Japan in terms of rough terrain crane sales. A significant focus on the infrastructure development in APEJ countries growing investments of crane manufacturers in the region has led to a generation of over one fourth of the total sales in 2018.