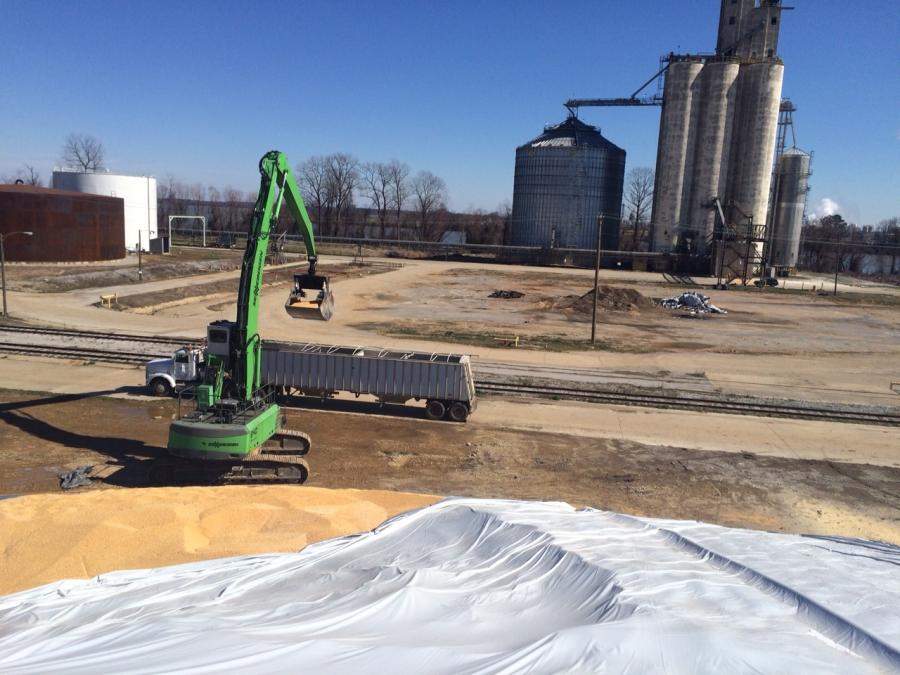 Moving 8 to 10 million bushels of material is a respectable year’s work for any river dock. When the material you’re moving is a seasonal field crop, the challenge moves up to another level.

Moving 8 to 10 million bushels of material is a respectable year's work for any river dock. When the material you're moving is a seasonal field crop, the challenge moves up to another level.

That's the challenge that Gavilon barge facility in Decatur, Ala., was facing when Vaughn Gambrell was named superintendent of the site. Gavilon, a leading global commodity management firm, acquired this dock on the Tennessee River to transload and store 1 million bushels of corn and grain here annually.

To meet this target, Gavilon needed a material handler that could keep pace through seasonal peaks, with as little downtime as possible while vessels were waiting. The chosen solution was a Sennebogen 840 R-HD and, with the facility's first few seasons behind him, Gambrell is sure it was the right choice.

The dependability of the green machine came through recently when a grain shipment was re-routed to the Decatur facility, with an urgent need to offload quickly. Barges ran loads from the vessel non-stop for 30 consecutive days, and the 840 never missed a step.

The 840 R-HD is the first purpose-built material handler Gambrell has operated.

“At my previous location, we worked with a converted excavator,” he explained. “This Sennebogen was something new for me.”

Purchased in 2011, the D-Series 840 model is mounted on a crawler undercarriage and equipped with a long reach banana boom, which carries a 5.5 cu. yd. (4.2 cu m) clamshell bucket.

The machine spends most of its time perched on a concrete platform overlooking the river. The 360 degree same lift capacity gives it an extra measure of stability, which operators appreciate when they pull up a full bucket load with the boom fully extended.

“You work more efficiently when you have that feeling of confidence in the machine,” said Gambrell.

He often takes a turn at operating the 840 himself. “I love it!” he said. “It's very easy to handle, and it's easy to train new operators. The joystick controls have a very intuitive feel.”

With the speed and precision of the Sennebogen machine, transloading directly from barges to trucks becomes a smooth, highly efficient process.

“We can plan our logistics to load straight into the outbound trucks,” said Gambrell, “and that lets us save a step in storing the grain in our elevators.”

As an experienced operator, Gambrell also appreciates the commanding view provided by the 840's hydraulically elevating maXCab. With the cab fully raised, his eye level is about 19 ft. (5.8 m) above the ground, not including the platform the machine sits on.

“It's helpful when the cab raises up, to see right into the barge, all the corners and where everybody is in it,” he said. “In most machines, even with a fixed hi-rise cab, you can't really see what's around you. But when I'm up on the platform operating the Sennebogen, I can see the guy who's running the skid-steer in the hold. That's important to both of us.”

In addition to its day job, the Sennebogen earns its keep moving material within the facility's 40-acre (16 ha) site. Gavilon can store nearly 2 million bushels of grain here, and about half of it stocked in ground piles. The 840's long reach helps to maintain stockpiles up to 40 ft. high (12.2 m). Gambrell also uses it to assist in tarping the piles by supporting most of the tarp's weight and positioning it while crews on the ground secure it.

Until the company added a large concrete pad this year, the ground piles were literally on the ground. Travel on the site could be treacherous after heavy rains. Gambrell noted that his skid-steers and 4x4 trucks often get stuck in the deep mud, but the Sennebogen has no trouble traveling around the work site on its wide crawler tracks.

“We haven't got the Sennebogen stuck yet, but we're trying,” joked Gambrell.

The dependability of the 840 pays off in cost savings as well as productivity. Gambrell said his maintenance crew finds troubleshooting to be very simple with plain and simple error codes appearing on the machine's diagnostics screen. For an emergency repair, Gambrell can call on his nearby Tractor & Equipment Co. (TEC) branch, Sennebogen's regional distributor. According to Donnie Burgreen, TEC's branch vice president, service response time for the Decatur site is “immediate.”

Fuel efficiency adds to those savings.

“The 840 gets good fuel economy,” Gambrell said. “We can unload almost two barges on one tank of fuel.”