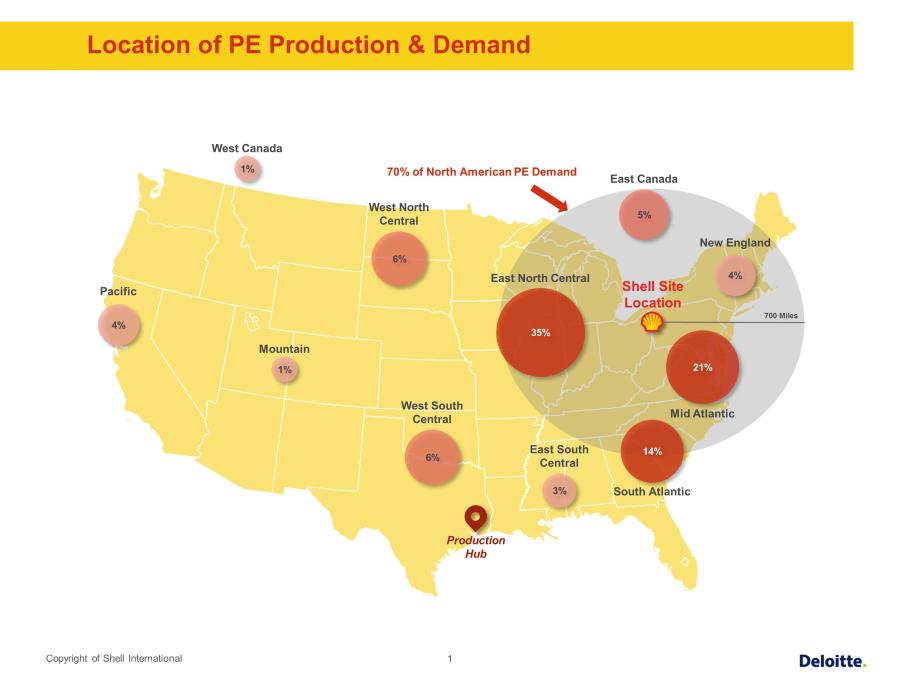 Shell Chemical Appalachia LLC (Shell) has announced it will build a petrochemicals complex near Pittsburgh, Pa.

Shell Chemical Appalachia LLC (Shell) has announced that it has taken the final investment decision to build a major petrochemicals complex near Pittsburgh, Pa. The plant will include an ethylene cracker with a polyethylene derivatives unit. Main construction is expected to begin in 2017, with commercial production anticipated within the next decade.

According to reports, the complex will use low-cost ethane from shale gas producers in the Marcellus and Utica basins to produce 1.7 million tons (1.6 million t) of polyethylene per year.

The facility will be built on the banks of the Ohio River in Potter Township, Beaver County, which is about 30 mi. (48.2 km) northwest of Pittsburgh.

“As a result of its close proximity to gas feedstock, the complex, and its customers, will benefit from shorter and more dependable supply chains, compared to supply from the Gulf Coast,” a Shell press release stated. “The location also is ideal because more than 70 percent of North American polyethylene customers are within a 700-mi. (1,126.5 km) radius of Pittsburgh.”

Shell spokesperson Ray Fisher noted that the company does not disclose investment figures, but other sources have listed the cost as “multi-billion dollar.”

The project promises new growth and jobs for the region. Up to 6,000 construction workers are expected to be involved in building the new facility, and about 600 permanent employees will be needed upon completion.

“Shell Chemicals has recently announced final investment decisions to expand alpha olefins production at our Geismar site in Louisiana and, with our partner CNOOC in China, to add a world-scale ethylene cracker with derivative units to our existing complex there,” said Graham van't Hoff, executive vice president for Royal Dutch Shell plc's global chemicals business. “This third announcement demonstrates the growth of Shell in chemicals and strengthens our competitive advantage.”

“Over the next months, we will complete the 'early works' program, including detailed design and engineering work,” he said. “This pre-work should clear the way for a smooth transition to the construction phase.”

The plant was first proposed in 2011, with Shell Chemical searching the northeastern United States for a possible spot. On March 15, 2012, the company announced that Pennsylvania had been chosen. The state reportedly granted the company a 15-year tax amnesty window and a $2.10 additional credit for every gallon of ethane it purchases from Pennsylvania-based natural gas drillers. The company purchased the site of the former Horsehead Corporation's zinc smelter for the facility, and the site was demolished in January 2015.

Royal Dutch Shell was formed in 1907, and its headquarters is in The Hague, the Netherlands. The parent company of the Shell group is Royal Dutch Shell plc, which is incorporated in England and Wales.