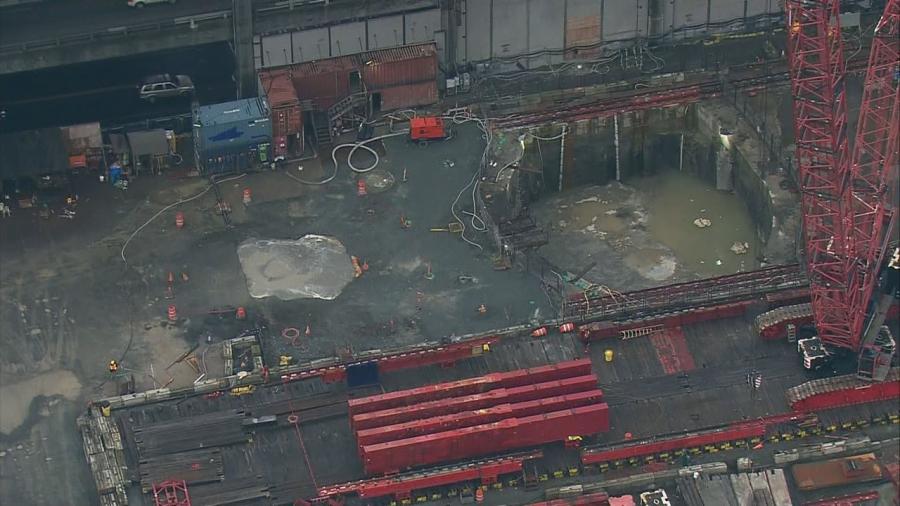 The design-build project is in line to replace the elevated double-deck Alaska Viaduct on SR 99 with a bored tunnel. The need for the replacement roadway became obvious after a 2001 earthquake damaged the viaduct, built in the 1950s and at the end of its lifespan. The legislature approved the project in 2009, budgeting $3.1 billion in state and federal and local funds.

In 2010, Seattle Tunnel Partners was named the apparent best-value bidder for the project. Work on the new roadway began in 2011, with the boring machine, dubbed “Bertha,” beginning to mine in 2013. In late 2013, the boring work was stopped after Bertha overheated. The mining work did not begin again until December 2015.

Now the tunneling work is again at a standstill.

The trouble started the week of Jan. 11, when a barge used to remove dirt listed to one side spilling clean soil into Elliott Bay. Crews resumed work at 7 p.m. Jan. 13, but approximately two hours later, a sinkhole developed within STP's work zone near South Main Street, about 35 ft. (10.6 m) north of the access pit, said Lauren Newborn, spokeswoman of the Washington Department of Transportation.

“It is located more than 100 feet south of the cutterhead's current location, in ground that crews mined through last week,” Newborn said. “STP filled the sinkhole overnight with 250 cubic yards of concrete.”

“There's no other settlement in the area, the viaduct did not move or settle at all, so the walls we constructed along the east side of the tunnel did their job,” he said.

Nonetheless, Gov. Jay Inslee announced in a live press conference at the Olympia Capital that he was concerned for the public's safety.

“I am seriously disappointed that we have another issue with the tunneling project in Seattle,” said Inslee. “The cause of this sinkhole is still under investigation. In consulting with the DOT, it's been decided the contractor will be notified that they should suspend tunneling work at this time. The contactor must identify the root cause analysis and complete the analysis of the issues that have occurred since the contractor has resumed tunneling.

“A manual survey of the viaduct has been conducted. There is no indication of movement of the viaduct at this time. I want to stress that the very reason the legislature proceeded with the project originally was to tear down the seismically vulnerable viaduct and fundamentally ensure public safety. I have great concerns regarding public safety if the contractor were to move forward without addressing the root cause of this sinkhole. We must continue to protect public safety.

“With this stop order the contractor will not resume tunneling until they demonstrate that they can proceed with their work in safety and have plans in place to prevent this type of incident in the future. The state needs a root cause analysis and work plans that are to the satisfaction of our independent experts. We will aggressively hold this contractor accountable to this contract, to ensure public safety that they get the job done right.”