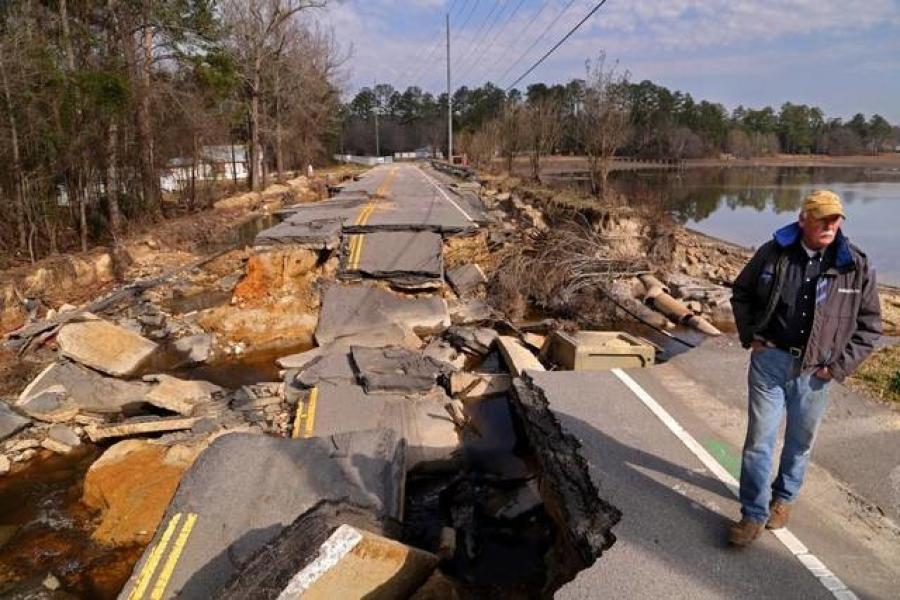 Infrastructure grant programs are expected to be on the chopping block in the White House budget, according to one GOP senator, despite President Trump's promise to revitalize U.S. roads, bridges and airports.

The administration is putting together a separate $1 trillion package to upgrade the nation's crumbling infrastructure through public and private financing.

But the optics of slashing federal transportation funds in his budget proposal while pushing for a separate financing package underscores Trump's challenge of balancing his promises of massive infrastructure investment and dramatic cuts in government spending.

“It's very inconsistent,” Rep. John Delaney (D-Md.) told The Hill. “The real question is, with the cuts he's proposing to pay for this defense increase, how do we pay for the infrastructure plan?”

One item that could be on the non-defense side chopping block is the Transportation Investment Generating Economic Recovery (TIGER) grant program, which was set up by the Obama administration's 2009 economic stimulus package to provide an extra injection of cash for surface transportation projects.

Since then, the competitive program has distributed $5.1 billion to more than 400 projects across the country, according to the latest estimate from the Department of Transportation (DOT).

TIGER grants are a popular funding tool among cities and states, with applications often “far exceed[ing] available funds,” according to the DOT.

“This program is very popular with local and state governments and transportation agencies across the country because of its wide-ranging eligibility: it can fund everything from ports to rails to transit to highways,” Beth Osborne, senior policy adviser for Transportation for America, said at a Senate hearing on Wednesday.

“Since the loss of earmarks, this is one of the only programs that allows local and country governments to directly access federal funds.”

Other competitive programs, such as the FASTLANE grants created by the last highway bill, are also frequently praised.

“We've had nine bridges that have been forced to shut down,” Rep. Mike Johnson (R-La.) told the House Appropriations Subcommittee on Transportation, Housing and Urban Development.

“In addition to advocating for adequate formula funding … I also ask that the committee support competitive grant opportunities in the FASTLANE grant program.”

But such infrastructure grants could get caught in the crosshairs of Trump's “skinny budget” – expected to land as soon as next week – that will cut $54 billion in discretionary money in exchange for a boost in defense spending.

“I fully expect when we get the budget, that we may well see the TIGER grant program slashed,” Collins said during Wednesday's hearing. She told The Hill she would seek to protect TIGER grants in any future spending measure.

A spokesperson for the White House said the budget process is “a complex one, with many moving parts,” but would not comment on specifics.

“It would be premature for us to comment – or anyone to report – on any aspect of this ever-changing, internal discussion before the publication of the document,” the spokesperson said. “The President and his cabinet are working collaboratively to create a leaner, more efficient government that does more with less of tax payers' hard-earned dollars.”

But if Trump's budget hews closely to a blueprint published by the conservative Heritage Foundation, as The Hill reported last month, it could entirely eliminate the annual $510 million TIGER program.

“If they cut TIGER grants, I don't know where that gets them,” said Rep. Peter DeFazio (D-Ore.), ranking member on the House Transportation and Infrastructure Committee. “It would seem to be contradictory” to the administrations infrastruture pledge.

Massive federal spending on transportation has long given fiscal conservatives heartburn, with some believing the issue is better left to the states.

Republicans on Capitol Hill have taken aim at TIGER grants before, proposing to zero out or restrict funding for the program. Some critics have accused TIGER projects of being “boondoggles,” or the equivalent of administrative earmarks.

President Obama took heat for the “shovel ready” transportation projects contained in his economic stimulus bill, centered on how long such projects took to get off the ground and whether they created as many jobs as promised.

Republicans prefer putting the private sector in charge of infrastructure projects through public-private partnerships, which they say bring down costs and speed up delivery.

And there are other tools that can be used to deliver cash to states and cities besides grants and formula funding programs.

"The government has wasted too much of the taxpayer's money on inefficient and misguided projects. By looking at infrastructure from a businessperson's perspective, as the president and these executives do, we can restore respect for the taxpayer dollar and make the best investment."

While the president's budget is merely a guide for congressional appropriators, any transportation cuts could increase pressure on Trump to come up with alternative funding solutions in his promised infrastructure package.

The latest report from the American Society of Civil Engineers estimates that if current spending levels continue, the country will be facing a $2 trillion funding gap by 2025.

“If we adhere to the steep budget cuts that the administration is contemplating for nondefense discretionary spending, it would be impossible to sustain even today's funding levels for critical infrastructure programs,” Sen. Jack Reed (D-R.I.), ranking member on the transportation spending subcommittee, said during Wednesday's hearing.

Democrats and rural Republicans have warned that private financing won't address all of the nation's infrastructure needs, because investors will only be attracted to large-scale projects they can use to recoup their investments through toll ways or user fees.

Transportation leaders have repeatedly emphasized the importance of including core federal funding in Trump's infrastructure bill.

“If [TIGER grants] were to be cut, then it's big time trouble,” Sen. Bill Nelson (D-Fla.), ranking member on the Commerce, Science and Transportation Committee, told The Hill on Thursday.

“Department of Transportation TIGER grants are something that are considered essential to rehabbing our infrastructure.”