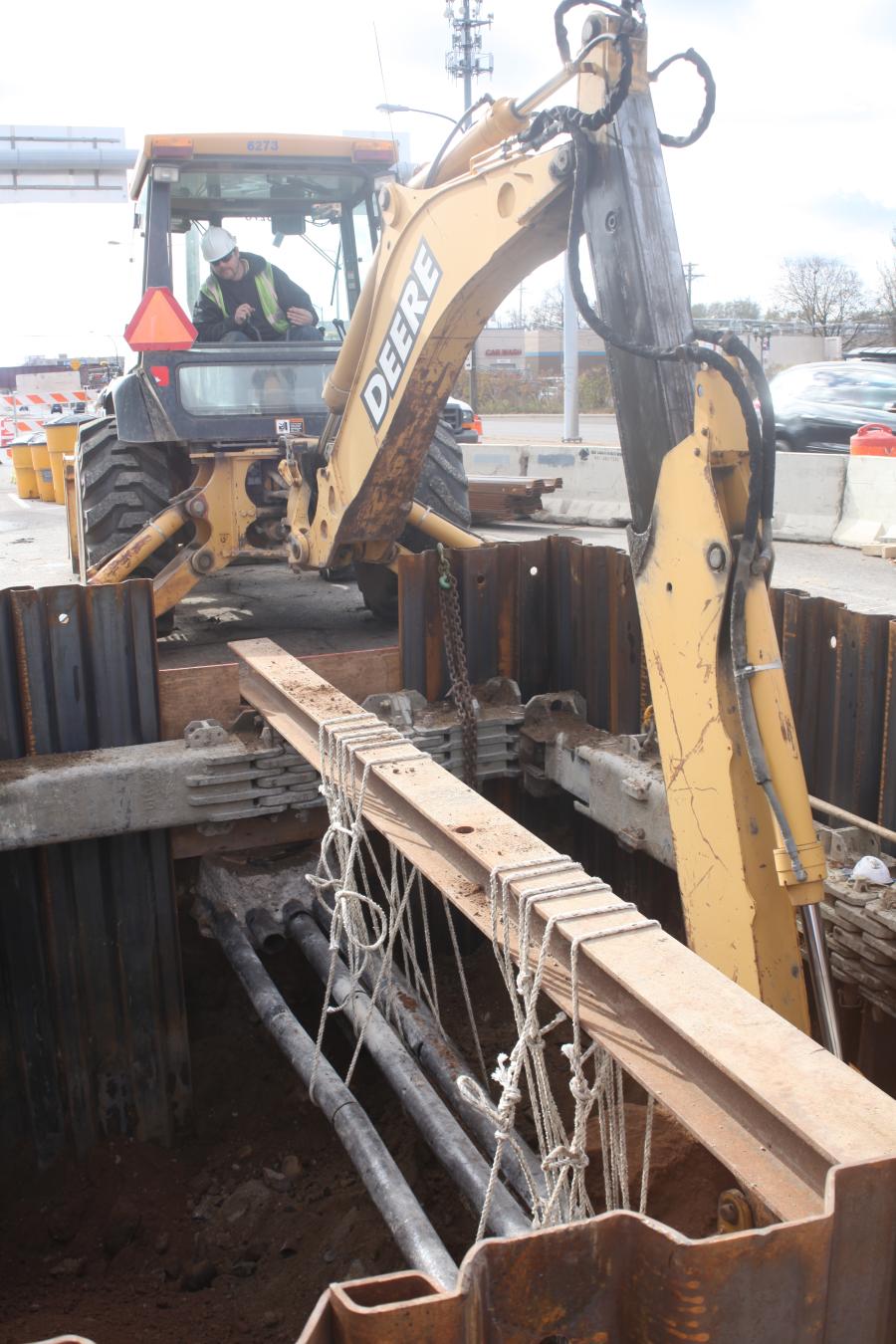 In the fall of 2014, seven months prior to the start of construction, crews of Xcel Electric, the regional electrical distributor, removed a 13,800 volt feeder line hanging below the Snelling Avenue bridge.

At 96 days, the schedule was tight. Milestone dates had to be met with very little wiggle room. Contract work had to be closely coordinated with new bus shelter construction and city lighting improvements while crews worked mostly under live traffic.

With the mill and overlay, contract work included the concrete deck replacement of the Snelling Avenue bridge crossing over I-94 near the south end of the project. Street improvements also included new curb and sidewalks up and down the work zone, storm drainage improvements, building ADA compliant sidewalk quadrants and the construction of eight bus stops.

The city of St. Paul at its own cost added a new street lighting system of 108 decorative twin lantern street lamps and approximately 15,700 ft. (4,800 m) of wiring through this strip of Snelling Avenue.

The metro-wide transportation agency looked at the basic street improvements as an opportunity to add a $27 million Bus Rapid Transit (BRT) line. This line, with fewer stops and faster service will connect the city of Roseville, St. Paul's suburban neighborhood to the north to the city of Minneapolis.

The Minnesota Department of Transportation (MnDOT) awarded the $13.2 million mill and overlay contract to Thomas and Sons, headquartered in Rogers, Minn.

This project is notable because of its geographic location in the city and the impact it had on the daily commerce, commuting and residential activities of this part of St. Paul.

Snelling Avenue in St. Paul is a 4 mi. (6.4 km) section of Minnesota TH51, a relatively short, urban highway. It cuts roughly through the center of a series of St. Paul's high density neighborhoods and serves mostly as a commuter and trucking route.

In the work zone limits, however, Snelling Avenue takes on a more commerce oriented look. Here, it is lined by 108 closely spaced businesses. It carries approximately 35,000 vehicles per day (vpd) through this section of the street. Nearly at the halfway point of the work zone, it connects to University Avenue.

University Avenue is an inner-city four lane arterial running 11 mi. (17.7 km) between the downtowns of St. Paul and Minneapolis. It also is a major commerce route lined up and down the avenue with hundreds of businesses, shops, restaurants, condominiums, apartments and several schools.

Of all the arterial intersections in the Twin Cities, the cross roads of Snelling and University avenues in St. Paul have the remarkable distinction of carrying some of the highest volumes of traffic.

Near the south end of the work zone, the Snelling Avenue bridge spans six lanes of I-94, an urban freeway connecting the eastern and western suburbs of St. Paul and Minneapolis.

Approximately 150,000 vpd run on I-94 below the Snelling Avenue bridge. As a major connection to St. Paul for commuters and truckers, it becomes especially critical during the 12-day Minnesota State Fair located just beyond the project limits at the north end.

A large building project at the south end of the street project added another dimension to the schedule and phasing of the street work. Here, a large, five-story, 210 unit high end apartment building was at its peak of construction and the contractor had one lane of Snelling Avenue closed to use as a staging and delivery zone.

With all the businesses, the thousands of daily motorists, the hundreds of daily shoppers and tight schedule, construction crews had no time to look back.

“We knew it would be a challenge because it was an aggressive schedule. I think all in all the work went well and the contractor met the time frames we were trying to achieve,” said Eric Embacher, MnDOT resident construction engineer.

Early prep work began seven months prior to the start of the road work in the fall of 2014. The regional electrical utility, Xcel Energy, stepped into the project early to move a 13,800 voltage main electrical feeder line hanging below the bridge deck and bore it under the freeway.

Over several weeks, Xcel Energy crews moved the old cable, dug two huge bore pits on each side of the freeway and bored 4,000 ft. (1,200 m) of new cable.

“It certainly helped us,” Embacher said of Xcel's work months in advance of the project. “Their coordination and work ahead of the project went really well. They were proactive in removing the cable so we didn't have to deal with it during construction.”

When work started in May of last year, many of the same businesses on Snelling Avenue, most of them small, had recently weathered a very intense, 11 mi. (17.7 km) light rail train construction running down the length of University Avenue.

With the traffic restrictions and sidewalk construction running right up to their doors, business owners on Snelling were concerned with the impacts this project may have on their daily cash receipts.

Along with daily Web updates, MnDOT communications staff developed an intensive communications plan and many times very specific strategy targeting every single business affected by the work to help allay some of these fears.

Regular meetings with business and neighborhood groups and daily and sometime last minute updates were the norm on this project.

“We developed a very good relationship with the district and business councils and organizations and met a month ahead of the construction start date to make sure they had all the information they needed” said Kirsten Kline, MnDOT communications officer. “We made ourselves really available for questions or comments.”

At times, the publicity was very specific.

“We would step out and notify each individual business in advance when their property would be directly affected,” said Kevin Walker, the communications officer assigned by MnDOT to be the business liaison of the project.

Ed Conley, president of the Selby-Snelling Area Business Association said, “working with MnDOT communications staff reminded me of working with my dad. He would say, ‘don't tell me how hard you work, tell me what you got done.' They finished the street work on time and on budget. Very impressive.”

MnDOT and Thomas and Sons field crews were very helpful to keeping the communications staff informed of any last minute changes to the schedule, Klein noted.

No business was ever shut down and many times involved additional labor time to make this happen.

“We accommodated their schedules,” said Neil Thomas, part owner of Thomas and Sons. “We built temporary ramps or we had to bridge across the fresh concrete to get to their doors. We actually built quite a few bridges over freshly poured concrete and other times we picked the off peak hours to pour concrete. We made it work for everybody.

“I relied heavily on key supervisory staff to completing this project on time and on schedule.”

Thomas and Sons Construction had experience behind them at this site. Nearly 40 years ago, in 1979, the company and a hand full of its seasoned workers took on the same work on most of the same stretch of Snelling during its inaugural years of operation, Thomas said.

When the contractor hit the site in early May of last year, it closed down a .5 mi. (.8 km) stretch of Snelling to through traffic on both sides of the bridge. A small force of workers with Lunda Construction, based out of Black River Falls, Wis., moved in a week later.

Bituminous Roadways located in Mendota Heights, Minn., would soon follow with its own equipment including a Cat paver and Cat, Bomag and Hamm rollers.

While Thomas and Sons crews began sewer and street work near the bridge, Lunda crews began preliminary deck removal work off the traffic lanes before closing the bridge entirely to remove the section of deck over the freeway.

Directly applying its strategy to accommodate individual businesses, MnDOT chose not to close the Snelling Avenue bridge over Mother's Day weekend to not affect the business flow of a nearby florist.

However, moving the bridge closure to the weekend after Mother's Day left very little flexibility to the schedule.

“We really had to hit the weekend of the sixteenth because if we didn't hit that weekend, we obviously were not going to shut down I-94 during Memorial Day weekend. And closing the bridge on the following weekend would have pushed the schedule out a couple of weeks,” Embacher said.

The Friday night after Mother's Day, Lunda crews jumped into the deck removal operations in earnest. After traffic crews shut down the busy interstate, backhoe operators began hammering away at the concrete deck.

With a nice, warm spring weekend on their side, the deck removal “went well and we had the freeway opened a couple of hours in advance of the schedule time,” Thomas said.

After the more painstaking, open cut catch basin lead adjustments had been dug and moving very methodically and linearly from south to north, asphalt paving began on both sides of the bridge within weeks of the start date.

“We started with the underground utility improvements and right after that we followed with the graveling and grading. Then we would start the sidewalk reconstruction,” Thomas said.

By the first week in June, the digging, grading and sidewalk work started on the north side of University, nearly the midway point of the work zone.

“We wanted to have this section of Snelling completed before the start of the State Fair in late August. We actually achieved that goal by three blocks beyond Minnehaha,” Thomas said.

The day after Labor Day, crews and equipment rolled in for the final stretch of road work.

By late October, Thomas and Sons made the deadline for completion of its contract for the Snelling Avenue improvements and had cleared the streets of its equipment and traffic control signs.Bus shelter work and wiring is on-going and will continue into this spring before the BRT line is ready to start carrying passengers.