Take a Look Back at the Lewis and Clark Bridge Construction 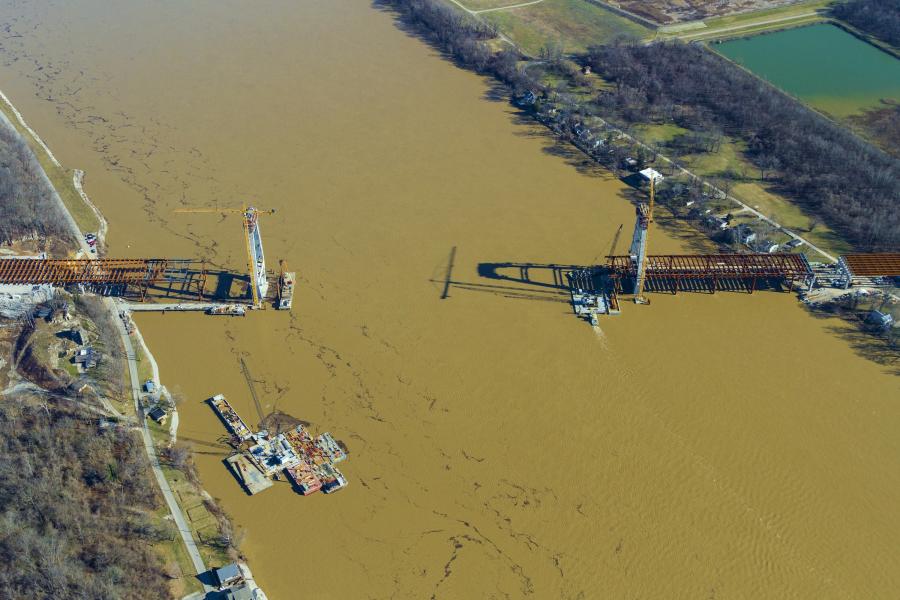 February 2016: This view shows both towers; Indiana on the left; Kentucky on the right.

That officially puts a cap on the $2.3 billion Louisville-Southern Indiana Ohio River Bridges Project— one of the largest projects in Louisville's history.

Today we're doing the same with the Lewis and Clark bridge, a project we watched with great interest in 2016 as we received new aerial photos every few months from project coordinators, showing the latest construction milestones. Hundreds gathered yesterday during a formal ceremony to drive across the bridge as a way to commemorate its opening.

The project, as we reported this morning, involved more than 3.3 million hours of labor during its three-year construction.

Unlike the downtown crossing, construction of the Lewis and Clark bridge was remote, and crews with WVB East End Partners had to build new roadways and tunnels to connect the bridge to the Prospect area in Jefferson County and to Southern Indiana. That created more buzz around each update.

In the accompanying slideshow, we have compiled some of our favorite images during the bridge's construction, along with the latest aerial views shot this month of the finalized work and a few from yesterday's opening. We can enjoy a few more days of toll-free rides along the Lincoln, Kennedy and Lewis and Clark bridges as the RiverLink tolling system doesn't kick in until Friday, Dec. 30.

The opening of the Lewis and Clark bridge coincides with the opening of the first part of a major Indiana transportation corridor that eventually will connect the 6,000-acre River Ridge Commerce Center to the Port of Indiana–Jeffersonville has opened.

The $10.5 million segment of the road, International Drive, now connects the new Interstate 265 interchange through River Ridge to Ind. 62 and Logistics Avenue.