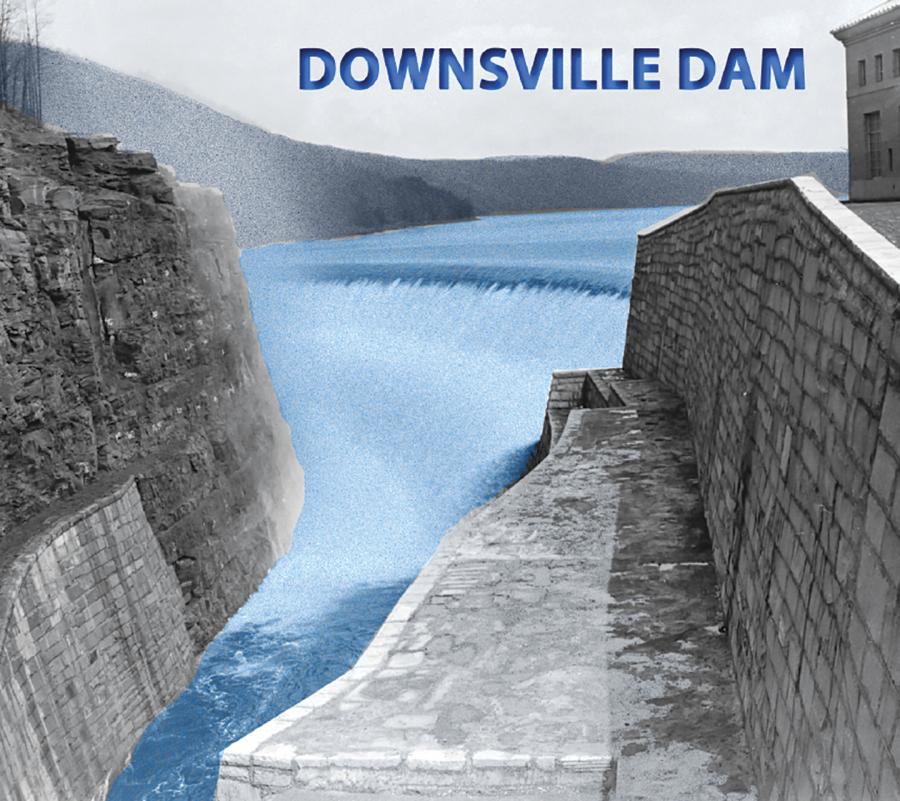 Fermo Bianchi photo The completed Downsville Dam in Delaware County, N.Y., taken on April 18, 1956, at 1:30 p.m. Camera point on south side of rock cut at the north end of dam looking east showing flow (approximately 1.3 feet) of water over the spillway.

The NYC water system has a storage capacity of 550 billion U.S. gallons. A system of aqueducts, distribution pipes, reservoirs and water tunnels are used to supply NYC with water. The water transmission is largely via gravity.

The Delaware Aqueduct at 85 miles in length is the largest. In fact, it is the longest tunnel in the world. It was finished in 1945 and taps tributaries of the Delaware River in the western Catskill Mountains to provide roughly half of NYC's water supply. The Downsville Dam built along the East Branch of the Delaware River in Delaware County, N.Y., was completed in 1954. It formed the Pepacton Reservoir which was filled in 1955.

The water flows through the dam into the 25.5 mile East Delaware Tunnel, travels into the Rondout Reservoir before emptying into the 85 mile long Delaware Aqueduct.

he JV team of Walsh and Perini also did the preparatory work for the Downsville Dam under a separate $13,700,510 contract. The major items were the construction of a 2,155 ft. (656.8 m) long river diversion tunnel and a concrete core or cut-off wall.

The bids for the construction of the Downsville Dam were opened on Jan. 17, 1950. The low bidder at $17,902,275 was a joint venture of Carlo Bianchi & Company of Framingham, Mass.; Central Construction Company of Lawrence, Mass.; Munroe-Langstroth Inc., of North Attleboro, Mass.; and G. L. Rugo & Sons Inc., of Boston, Mass. The project would be the largest ever undertaken by the “Joint Bidders from Massachusetts” and their low-bid stunned most of the construction industry in the east. Giant firms Perini & Walsh; Morrison-Knudsen & Peter Kiewit; and S. A. Healy were among the nine bidders for the project.