A stage and orchestra pit were found by construction workers beneath the site of the toy store. 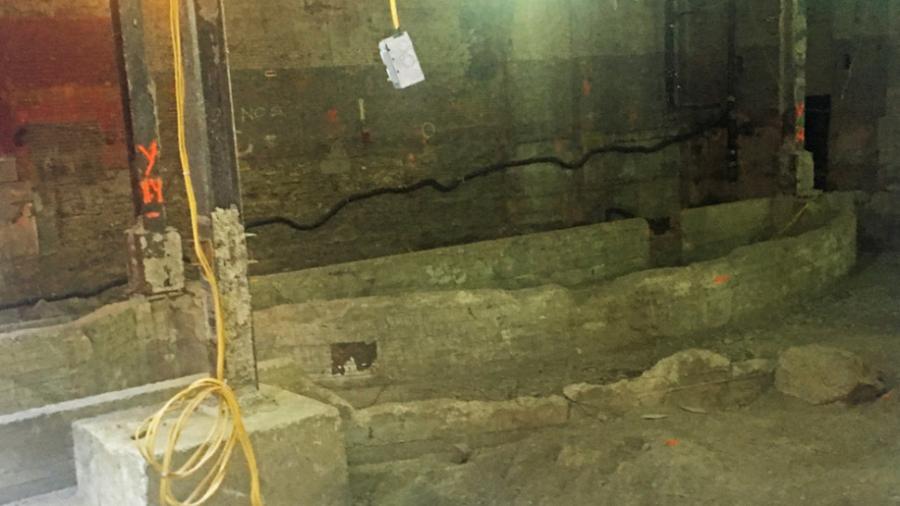 Image courtesy of Playbill. The photo shows the outline of what seems to be an orchestra pit and the edge of a stage.

The website Playbill is reporting that workers dismantling the old Times Square Toys “R” Us store at the corner of West 44th Street and Broadway have uncovered the remnants of an old theatre below ground level, according to a report on the Curbed New York website.

Educator and blogger Howard Sherman shared a photo of the ruins with Playbill.com. It accompanies this story. Sherman is director of the new Arts Integrity Initiative at the New School in New York. His photo shows the outline of what seems to be an orchestra pit and the edge of a stage.

The website reported, “Demolition crews working on the store's ground floor have uncovered the century-old foundations of a theatre and orchestra pit that once occupied the Broadway site between West 44th and 45th streets.”

Several theatres have stood on the site, including the very first theatre built in Times Square, the Olympia, which was erected by Oscar Hammerstein I (grandfather of the lyricist) in 1895. The building housed two stages, the Lyric and the Music Hall. It was renamed the Criterion and spent most of the 20th century as a cinema. It was demolished in 1935, though the ruins found this week may be a remnant.

A new cinema, also called the Criterion, was subsequently built on the site. In 1988 it was remodeled as two legitimate theatres, known as Criterion Stage Left and Criterion Stage Right. The building was gutted in 1999 and renovated as the Toys “R” Us toy store that featured a multi-story indoor Ferris wheel. The store closed early this year.

The building has once again been gutted and is being remodeled as a Gap/Old Navy clothing store, scheduled to open in 2017.