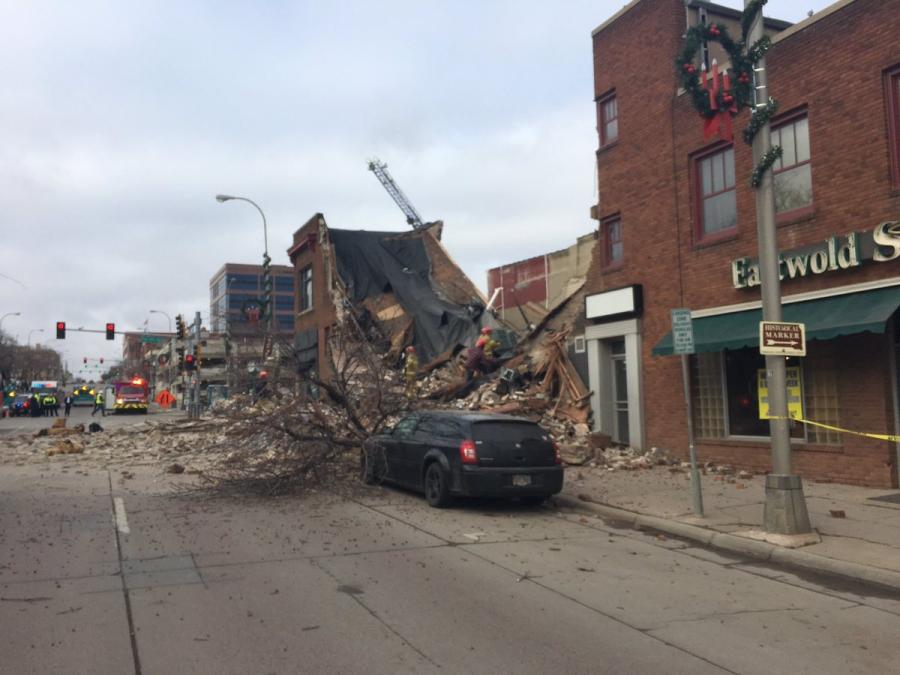 A construction worker died following the collapse of a building in Sioux Falls.

(Scroll down for updates)

One person was saved, however, when rescue workers pulled a 22-year-old woman from the rubble of the collapsed building.

Sioux Falls emergency manager Regan Smith said the woman is "alive and well," but does have injuries to her leg. Smith says she has been taken to a hospital.

The woman's dog also was rescued from the rubble.

Mike Klatt, 39, was getting coffee across the street when he saw bricks coming down from the top of the building. The bottom gave way, and it collapsed into the street, he said. Klatt said people ran out of the coffee shop to see if anyone was trapped, but nobody was visible.

He said he was waiting at the cordoned-off scene for his black Dodge Magnum to be freed from the rubble.

The old Copper Lounge building has been vacant since September and was expected to reopen in the spring as a drug store.

“In Sioux Falls and South Dakota, whenever there is an incident or a challenge like this, our first thoughts always go to those impacted. We're going to do everything we can to save these precious lives." Heuther stated. "We know we've got the best teams to ultimately make that happen."

"We also can't lose sight of the first responders and their protection, so let's pray for their safety as well."

UPDATE: (2:50 p.m., Central Time) The Sioux Falls Fire Department (SFFD) on Twitter said that structural engineers are on site. Additional rescuers are on their way to help local teams with workload and give them a break. The SFFD also said that it is continuing search and rescue efforts for a second victim, reported to be a construction worker, and have not lost hope. A scent dog is on its way to help find the victim.

Shortly before 6 p.m., central time, Sioux Falls Fire Chief Jim Sideras told reporters that the body of Ethan McMahon of Sioux Falls, a construction worker, had been found in the rubble of the collapsed Copper Lounge building. Ethan had been working with his brother, John, when the building collapsed, but John was able to escape. Their mother posted a message to Facebook confirming to family and friends that her sons were in the building.

According to KELO, the exact cause of the collapse remains unclear. City permits chief Ron Bell has confirmed that the contractor in charge of the remodel did not have the required paperwork to begin demolition of any load-bearing walls, however the company did have permits to make some cosmetic changes in the building. City records show the building at 10th and Phillips was approximately 100 years old.