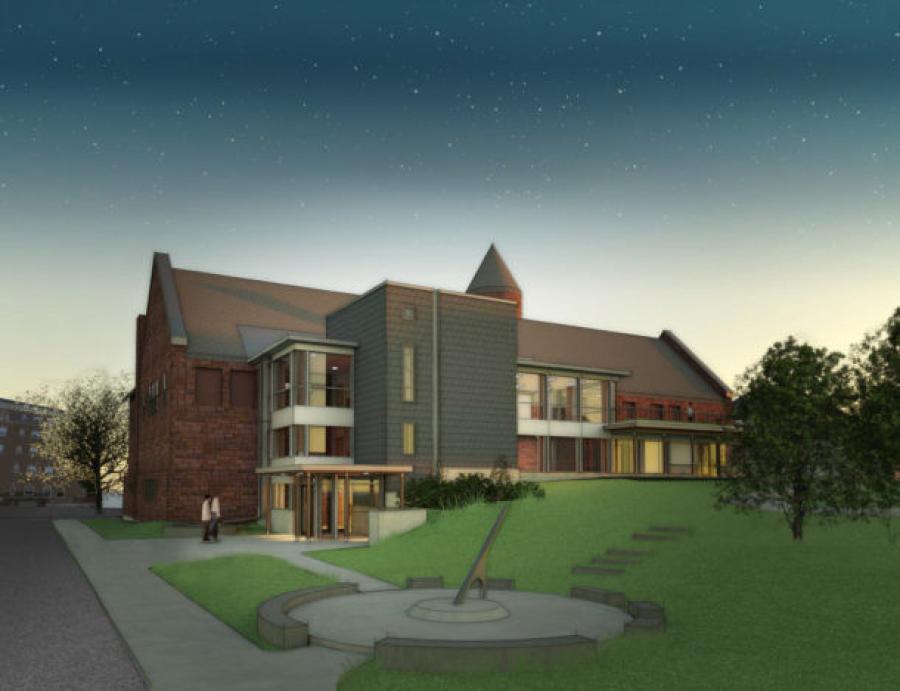 An architectural rendering shows the planned addition at the Fairbanks Museum and Planetarium in St. Johnsbury, which will cost around $2 million and be the first addition since 1895. (Vermont Integrated Architecture rendering)

The Fairbanks Museum and Planetarium in Vermont could finally become a reality after years of beleaguered expansion plans.

The 132-year-old facility in St. Johnsbury was chosen by Vermont's U.S. Rep. Peter Welch as one of 10 projects statewide to be funded in the upcoming federal budget bill.

If it makes it through the budget process, the appropriation will give the museum a $2.47 million grant for a planned 6,000-sq.-ft., three-story upgrade. The money would come through the U.S. Department of Agriculture (USDA).

Welch, speaking to reporters at a news conference outside the Fairbanks Museum July 7, noted that the project "has enormous support" among local residents and that he was "delighted" to support it.

The museum had been considering an expansion of the historic sandstone and limestone building on Main Street for a few years, according to VTDigger, a Vermont online news source.

In the beginning, the goal was to improve access to the museum's second-floor balcony — which guests can reach only via narrow spiral staircases — and to its basement. The newest planned improvements would not only include an elevator that stops on all three floors of the building, but also feature meteorology and astronomy exhibits. In a change, the Fairbanks will give visitors more hands-on activities, something that it has never allowed before.

Plans also called for the museum addition to be made entirely of mass timber, a wood building material that has become increasingly popular in the United States and considered better for the environment than more traditional materials. If built, the addition would be Vermont's first entirely mass-timber building.

Welch praised the building material's potential for an eco-friendlier construction process. He also said the project would bring 70 jobs to the St. Johnsbury area, and other speakers at the news conference expressed optimism that the use of mass timber could spark new life for New England's forestry industry.

The Vermont online news site reported that in late 2020, Fairbanks Museum officials believed construction crews could break ground this past spring on the planned addition, but the project's costs came in $2 million more than anticipated at $4.9 million, a 69 percent increase.

Construction material prices have seen dramatic rises during the COVID-19 pandemic, especially lumber, and contractors have said they are busier than usual. Both those factors played a role in the inflated cost, VTDigger reported, leading museum officials to push back the construction to 2022.

The Fairbanks Museum has raised more than $2 million for the project from donors, foundations, grants and loans, and if the proposed federal money comes through, it will cover the remaining cost of the project, executive director Adam Kane said July 7.

Highlighting the museum's role as an anchor institution in St. Johnsbury, Kane said the hope is that people will visit the historic facility and patronize the downtown area.

"This addition to the museum will help drive that visitation, and that's going to spill over to all the businesses around us," he added.

The $2.47 million USDA grant is contingent on a successful federal budget, VTDigger noted. The federal fiscal year begins in October, but appropriations often are not completed by that point.