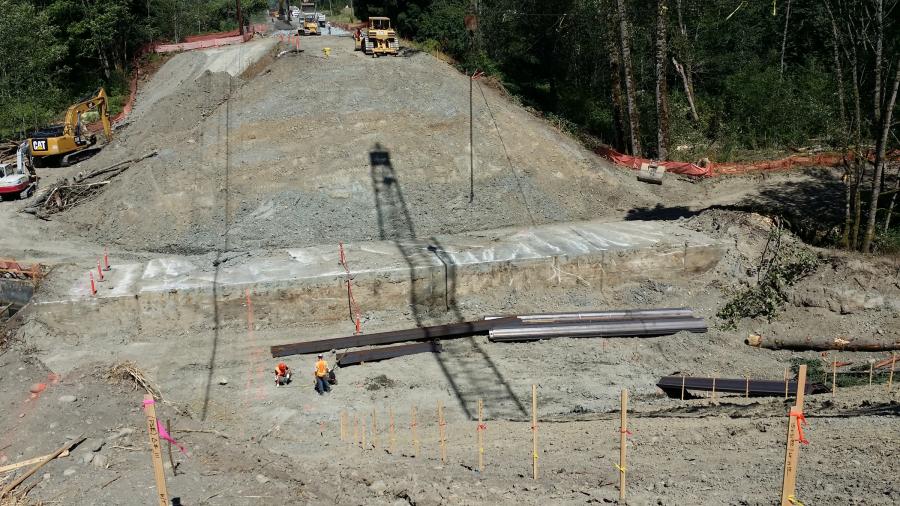 WSDOT photo. Removing the culvert required excavating the fill down to the streambed. Crews could work safely without having to contend with traffic because the roadway was shut down and traffic was detoured onto nearby roads.

The Washington State Department of Transportation (WSDOT) is currently improving the traffic flow for a number of Western Washington residents. Yet these residents don't use the roadways; instead they travel in the streams flowing beneath the state's roadways and bridges. Just as improperly designed roadways result in backups or accidents when there are too many cars on the road, so too can improperly designed culverts impend a fish's passage downstream or upstream — and in the worst case, lead to their death.

For a number of years, culverts weren't designed or installed with fish in mind, but once science revealed the detrimental effects of improperly designed culverts upon fish migration, WSDOT began including fish-friendly culverts in new projects. In 1991, the agency started to replace the older culverts; however, the replacement was dictated on the availability of funds and whether the replacement was part of a larger roadway project.

With nearly 1,000 barriers needing replaced, and seeing slow progress, 21 Western Washington tribes (Lummi, Nooksack, Swinomish, Upper Skagit, Sauk-Suiattle, Stillaguamish, Tulalip, Muckleshoot, Puyallup, Nisqually, Squaxin Island, Skokomish, Suquamish, Port Gamble S'Klallam, Jamestown S'Klallam, Lower Elwha Klallam, Makah, Quileute, Hoh, Quinault, and Yakama) filed a “Request for Determination” in 2001. They petitioned the U.S. District Court to find that preserving fish runs was a treaty-based duty of the state of Washington. Six years later, the court ruled that the state may not own or operate culverts that hinder fish passage, and in 2013, the court issued an injunction that requires the state and its respective agencies to replace these culverts. Of these culverts, more than 800 fall within WSDOT's jurisdiction, and the agency has until 2030 to replace them.

Dean Moon, fish passage manager at WSDOT, said that following the injunction the agency established design teams and ramped up efforts to design barrier corrections that would eventually replace these 800 culverts. These new designs include bridges, box culverts or a reinforced concrete split box.

“Most of what we're installing are box culverts; many of them are in the 18 to 26 ft. range wide and the height varies depending upon the site specific conditions,” he explained, “and there are some bridge structures as well.”

Designing these projects require several areas of expertise including hydrologic and hydraulic engineers, geotechnical engineers, structural engineers, transportation engineers and biologists because a number of site conditions dictate the type of replacement structure. The stream channel characteristics, such as stream channel width and stream flow, soil type, are the primary consideration for the stream design.

“The theory is we try to mimic the natural stream conditions, upstream and downstream, which allow the system to function naturally, and then it will sustain itself over time,” Moon said.

However, the design team also must account for how traffic will be managed through the construction, such as whether detours are available, which also can contribute to the determination of the replacement structure.

“There are a number of things that we're trying to balance,” during these projects, he added.

The two culverts beneath Whatcom County's SR 542 where it crossed Anderson Creek are examples of barrier culvert that needed to be replaced. A timber bridge originally spanned the creek, but in the 1930s, it was replaced with two culverts and 40 ft. (12.2 m) of fill. These culverts frequently became blocked with debris that had to removed, and a fish ladder was necessary so the fish could travel upstream.

Shane Spahr, WSDOT design project engineer, said Anderson Creek had a number of issues which required several design iterations, including a 350 ft. (107 m) bank-to-bank span, the floodplain, an 11 ft. (3.3 m) drop at the outlet of the existing culvert, soft soils, and a stream bank that was 40 ft. below the roadway. He described the project site as triangular area on each side that is about 40 ft. deep and 100 ft. (30.5 m) long with a meandering creek running through the middle.

“We looked at arch structures, large round structures, and a bridge; we vetted a number of different options,” Spahr explained. “Ultimately what drove things was that the soft soils limited the options available to span the wide creek channel. A few foundation designs, such as what would be required for a precast reinforced arch structure, were deemed not feasible or too risky, because of the soft soils and high water table.”

Consequently, WSDOT's geotechnical office and bridge office collaborated and determined a design was needed that would spread out the load and also that didn't add more load that the soil in the existing embankment was already used to.

The final design was a 65-ft. (19.8 m) bridge structure composed of precast, prestressed voided slabs on top of lightweight concrete fill. Washington State's Bellingham branch of Granite Construction was awarded the $4.7-million project and received notice to proceed in July 2015. Luke Bentley, project manager of the project, said the Anderson Creek Culvert project was “a good combination job that combined all the work we do and good man-hours for our crews in the summer.”

The job had a 75-day closure period; however, Bentley said they expedited the schedule to minimize the impact to the public and opened 14 days early. They worked day and night shifts, with two six-worker dirt crews and the structures crew consisted of two crews of six-ten workers. In addition to Granite Construction's crews, 20 different subcontractors also worked on the site.

The steam was bypassed around the work area, and Chris Damitio, WSDOT project manager, said that care was taken during the dewatering process to ensure that fish were not left stranded. Bentley said that because of the hot summer, the stream had dried out quite a bit which made the stream work easier. Preparing the site for the bridge required excavating the existing culvert and removing 30,000 cu. yds. (22,936 cu m) of fill. Then it was building the 40 ft. retaining walls.

Using lightweight concrete in these retaining walls was a first for both WSDOT and for Bentley's crews.

“We set up a batch plant onsite, making the material onsite and pumping it right to the location where it went,” Bentley said. Of the lightweight concrete, he said, “we definitely got a better feel for it and worked great for what we had there. It's a pretty unique product.”

The 8,800 cu. yds. (6,728.083 cu m) of lightweight concrete was poured at a rate of 2 ft. (.6 m) per day as part of the expedited schedule. In addition to building the bridge, crews also did stream work that included regrading the stream and putting in new material, such as woody debris, to create habitat

With the highway shut down and traffic rerouted onto nearby county roads, crews could work without worrying about traffic.

“The county and local law enforcement was great to work with in making sure the detour flowed well, despite the additional traffic on the county road system,” Damitio said.

Although the project was declared operationally complete in September 2015, he said that they still have to paint the bridge to give it a natural gray finish and install bridge rails. Of the project, he said, “everything went really well and the only reason we're having to do work this spring is because of the early rains. We needed about two more weeks of good weather and we could have finished it.”

SR 542 Anderson Creek Culvert was one of several projects that were completed during summer 2015. Although the injunction recommends that WSDOT prioritize replacing barriers that will yield the greatest habitat benefit, Moon said that the initial projects the design teams started with were selected because the department had existing information, which allowed it to move quickly into the design process. However, “habitat gain is of high importance and we look for partnership opportunities and we group projects in geographic areas when it makes sense,” he said.

The final portion of projects is monitoring whether the culverts are positively affecting fish passage.

“The injunction has monitoring requirements to ensure we watch over each location for a number of years to make sure the correction is functioning as it's intended to,” Moon explained, “and so far they have been.”

Funding for this replacement work comes from the federal government and state funds, including Connecting Washington.

“In the 2015-17 budget, we did get around $88 million in the current biennium, so many of those projects that were designed in last biennium are scheduled for construction this coming summer,” he explained.

WSDOT has webpages devoted to explaining the Fish Passage Program and includes a number of helpful resources, such as annual reports and the WSDOT Fish Passage Six-year plan which details where in the state future projects are scheduled so the public can track the agency's progress.

As of December 2014, WSDOT has completed 282 fish passage projects, resulting in access to 970 mi. (1561 km) of potential steam habitat. And with 825 barriers left to replace, Moon said, after taking the year to design the replacement structures first, “now we're starting to make better progress in completing the projects.”