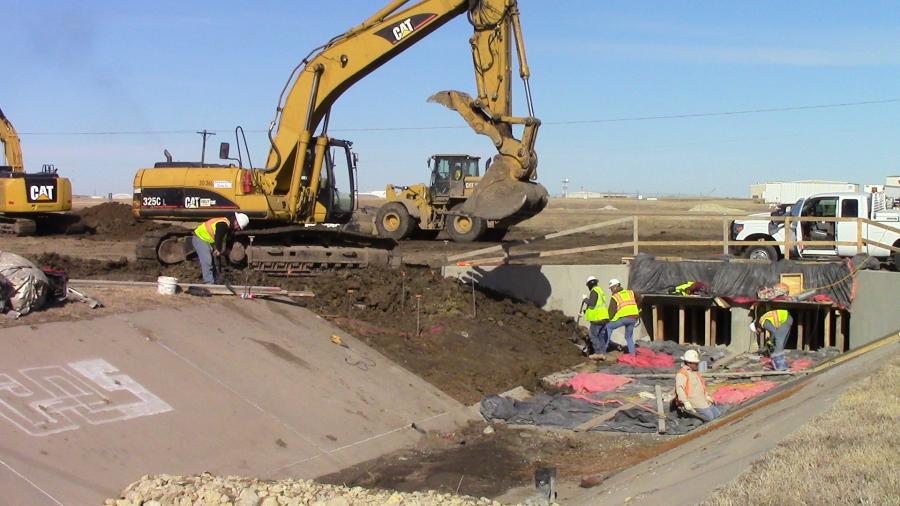 Crews from Wildcat Construction Co. Inc. are into the second construction season for the $79 million Kellogg and Webb Interchange Project, part of an East Kellogg initiative launched by a partnership between the city of Wichita, the Kansas Department of Transportation (KDOT), and Kansas Turnpike Authority (KTA) to improve travel in east Wichita.

The overall improvements along East Kellogg — more than $300 million and funded by T-WORKS ($162 million), the city of Wichita and the KTA — includes new interchanges at Webb, Greenwich and the Turnpike. It has been divided into two pieces: the first is the Webb Road Interchange, which started in August 2015 and should be completed in late 2019; the second is the Greenwich and I-35 Interchanges, with an estimated cost of $125 million, anticipated bid date this fall and completion in 2021.

The Kellogg (U.S. 54) and Webb Project, which stretches from the East Wichita Turnpike access to just short of Greenwich, is widening Kellogg to a six-lane freeway with an interchange at Webb Road, frontage roads, and modified access to the Kansas Turnpike Authority (KTA) at Exit 50. Wildcat's contract is valued at $79.1 million. The city of Wichita is contributing to the Webb Road project as well as managing it.

“The project is nearing the end of the first phase of construction — utility work,” said Gary Janzen, PE, Wichita's city engineer. “Crews are preparing to connect existing utilities to the new system. Construction of the south road and the east side of Webb Road is starting this summer. Pre-construction work is occurring on the second segment of the project from Greenwich to K-96. Land has been acquired and businesses along Greenwich and from Zelta to 127th Street have moved.

“Work has started to relocate utilities and buildings are being torn down to accommodate the relocation,” Janzen said. “Design plans are being finalized and should be available to contractors in late summer with the project letting occurring this fall. The expansion will reduce congestion, increase capacity and improve traffic flow on the city's east side.”

Janzen said that having a local contractor is beneficial.

“It provides opportunities for local subcontractors, vendors and suppliers,” he said.

The design for the roadwork was prepared by a team led by Parsons Brinckerhoff.

“The Kellogg & Webb Road intersection has historically recorded more accidents than any other intersection in the city. This project continues the six-lane freeway from near the East Turnpike access to just short of Greenwich Road removing the Kellogg traffic from the Webb Road Intersection for improved safety. Upon completion, the KTA and Webb Road traffic will access Kellogg via interchange ramps. Local traffic will utilize frontage roads with available U-Turns that travelers have come to expect along the corridor.

“Concept development began earlier to aid in preserving the corridor for the freeway with final design beginning in 2008 by Parsons Brinckerhoff to increase capacity and improve functionality. Kellogg traffic was a major consideration in the design with a current Average Annual Daily Traffic [AADT] in excess of 34,000 [69,000 total intersection traffic] increasing to more than 115,000 by 2040. Upon completion, commuters will experience memorable aesthetic elements incorporated into the design as well as improved travel times through the corridor.

“One of the many challenges of the project was in the coordination of the numerous stakeholders and meeting all expectations with relation to functionality and access. Ease of access to both the KTA and Webb Road was vital and it was through this interagency coordination that the final design was realized.”

“The improved capacity, functionality and safety along the corridor will serve not only the daily commuters but also support the local business community and spawn future development,” said Ron Nuessen, the design team's project manager.

Mike Armour, the city of Wichita's special projects engineer, said that “some of the highlights of the project include the curved trapezoidal steel box-girder bridge. The city of Wichita has used steel box-girder bridges on several of its interchanges in the past with good success. Another interesting element are the retaining walls, including the soldier-pile walls with cast-in-place panels, which will incorporate artistic elements developed by the artist. The 3D relief on the panels will give motorists the feel of a Kansas prairie. The corners of the grade-separated intersection at Webb Road will be the focal points of the landscaping, including rain gardens that have been designed with hardy, native plants and are connected to the stormwater system.

“Utility relocation is typically completed by the respective utility companies prior to the start of roadway construction,” he added. “However, due to the vital use of Kellogg for cross-city travel, it was decided to incorporate most of the utility work into the first phase of construction so that the impact to traffic could be managed and mitigated. Overseeing the utility relocation efforts also allowed the contractor to ensure that the new utility routes would indeed be free from conflict of the proposed roadway improvements.”

With major work now in progress, two lanes of traffic will be kept open in each direction, but left turns are now prohibited except for EB Kellogg, which is a heavy movement for employees of the local aircraft industry. To help protect the workers in the construction zone, the speed limit on Kellogg has been reduced to 40 mph and 30 mph on Webb for the remainder of the project.

“We are getting a jump on the schedule now,” said Alan Farrington, vice president of Wildcat. “Most of the utility companies have to relocate into facilities that we installed and they had until August 1 per-specification, however the cut-overs are now complete and we should be able to gain a few months of construction time on the project.

“We had to install a whole new underground duct bank systems for AT&T and Westar Energy,” Farrington said. “Westar is taking down all their overhead power lines and putting them into ducts and AT&T removed some of their ducts that were in conflict with the new construction and excavation of the new system.”

The goals for this year's construction season are to construct the south frontage road and east half of Webb Road, which is being widened by nearly 50 ft. (15 m) to the east of the existing curb lines. This will allow Wildcat to switch traffic so that its crews can have access to other areas of the project.

“When we get the south frontage road completed and the eastbound lanes shifted to it” said Farrington, “that will allow the existing westbound lanes of Kellogg to be relocated into the old eastbound lanes. Then we can construct the north frontage road, which once completed, allows us to split the EB and WB to the outsides of the mainline and get into the middle and start the bulk of the work. It's almost two years of lead up time to hit the final two years. It just takes time to get stuff built.”

The plan is to work straight through the winter if the weather is good. Farrington said that in addition to dealing with the challenges of working in an urban environment, a substantial number of soldier pile walls are being installed.

“It's similar to what we did in the last couple of projects,” Farrington said. “Those are pretty massive undertakings — you have to basically drill in concrete columns with steel innards from the existing ground level and start excavating down along the face of the concrete columns. We then put in the lagging and a back drain system, and then cast the concrete face in front of it. The concrete faces on this project are loaded with some fancy artwork created via urethane formliners.”

Phasing is the solution to the limited work space issue that the crews are facing. To construct the frontage roads that will be outside the existing lanes, traffic will be shifted onto the other lanes.

So far no unexpected issues have arisen.

“We did start to install some storm sewer for the widening of the east side of Kellogg and we found some sanitary sewer conflicts,” said Farrington, “but the design consultant designed a sanitary sewer relocation, which we are putting in to open space for the storm sewer.”

Cooperation is key to success on the project and that “team effort” spirit is being mobilized to take advantage of the extra two months.

Right now there are roughly 30 construction workers on site, but when peak construction is reached in 2018 and 2019, there will likely be more than 100 people. The main subcontractors are: Dondlinger & Sons Construction for the new Webb Road bridge, sanitary sewer, waterline and a portion of the storm sewer; Cornejo & Sons LLC for all paving, concrete and asphalt; Cillessen & Sons Inc. for traffic control and pavement markings; Fulsom Brothers Inc. for signing; Atlas Electric LLC for electrical and ITS; Phillips Southern Electric for traffic signals; and Seeders, Inc. for erosion control and landscaping, not to mention several other subcontractors. “The subcontractors will take care of their own crews,” said Farrington, “and we'll track all of the production rates and quantities of materials used, and make sure that the inspection staff get everything accounted for on the pay estimates.”

Concrete, asphalt and steel removed from the project is being taken to local recycling and scrap facilities as much as possible.

Save for mandatory night work on various elements that will reduce the number of lanes for motorists, most of the work will be carried out during the day.

“We're required to maintain at least two lanes in each direction of Kellogg at all times,” said Farrington. “If we get to an area where it is going to go down to one lane, the work has to be done between 10 pm and 6 am. We did two weeks of night work in April to remove some medians and pave them to allow for traffic switches. There will be scattered night work throughout the duration of the project.”

Wildcat is part of the Sherwood companies, which has a shop/yard that is eight mi. from the project. Mechanics from the shop visit the work site as needed. Major repairs have equipment sent to the shop.

“We do as much as we can in the field,” said Farrington.

Equipment and vehicles currently being used include mostly Cat 314, 320 and 329 excavators; Cat 938 and 950 loaders; Cat D5 and D6 dozers; and Cat 615 and 623 scrapers. As work ramps up, Wildcat expects to bring in a larger excavator and a 60 to 80-ton (54 to 72 t) crane for wall forming. As a subsidiary of Sherwood Construction Company, the majority of the equipment Wildcat uses is from Sherwood's leasing inventory. Locally, Foley Equipment Company provides parts, outside repairs and rentals as needed.

Farrington has been in construction for 31 years and he expressed his appreciation of the original work on the freeway infrastructure.

“For the time that it was constructed,” he said, “over 50 years of growth and expansion in Wichita taken place on the east side of town and it can no longer handle the capacity. It's still the original concrete pavement that has lasted this long. There was no existing bridge at Kellogg and Webb — just an at-grade intersection, which is being turned into a grade-separated interchange. We will be building the first bridge on the site.”