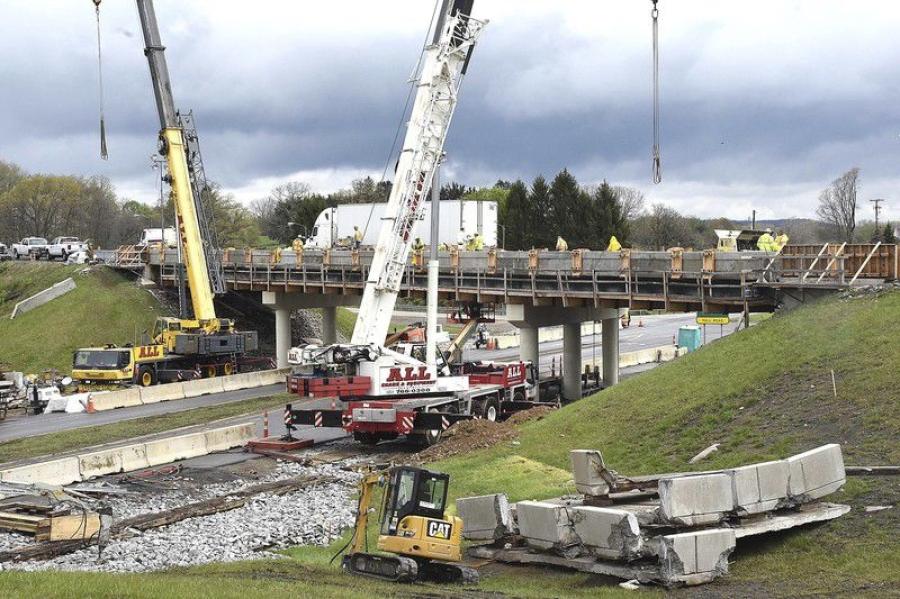 A bridge replacement project under way on the West Virginia Turnpike at Ghent is the first of its kind in West Virginia.

A bridge replacement project under way on the West Virginia Turnpike at Ghent is the first of its kind in West Virginia.

Construction started May 1st and was expected to wrap up in a weeks time, said Bala Sivakumar, vice president of HNTB, the company overseeing the replacement project.

The project is replacing the 220 foot, two-lane bridge deck on northbound I-77 over Route 48 in Ghent by using Accelerated Bridge Construction (ABC).

Construction crews work around the clock until the bridge is completed in days, not months or years.

The pre-cast elements are manufactured in warehouses, mostly during winter months, making them ready when construction season begins. This process alone cuts a month out of the road-closure timeframe, as it takes 28 days for concrete to settle, explained Sivakumar.

At the site Wednesday afternoon, crane booms were swing pre-cast elements as motorists starred. The motorists can see what's going on, but there's no impact to them, Sivakumar said.

Normally, motorists are impacted by months of construction causing traffic jams and delays. Bridge replacements can also provide safety risks for motorists and workers. But on ABC projects, those risks are reduced, Sivakumar said.

The U.S. Department of Transportation stated ABC projects have reduced traffic impact “because the safety of the traveling public and the flow of the transportation network are directly impacted by onsite construction related activities.”