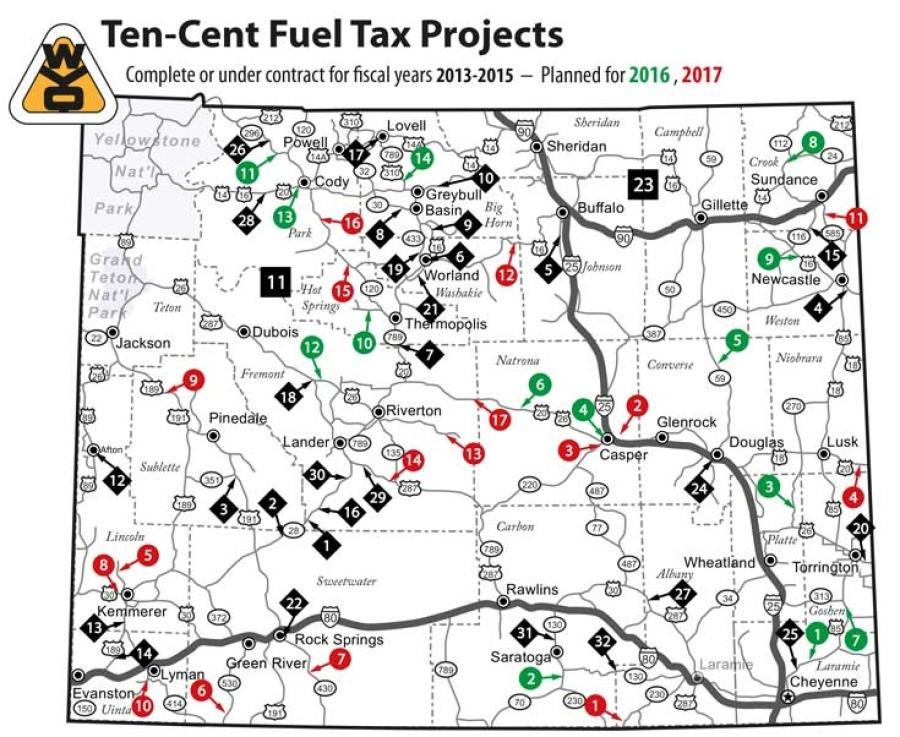 Twenty-five pavement preservation projects have been completed using the additional fuel tax revenue WYDOT received during the past two years, and work is either underway or under contract on 13 more projects.

The 25 projects already completed with the additional revenue were pavement preservation projects on 182 mi. (293 km) of highway, primarily involving milling off a few inches of deteriorating pavement and replacing it with a new layer of pavement the same thickness.

“The increase in the fuel tax was dedicated to be used on non-interstate highways,” said John Cox, WYDOT director. “We've been able to do a number of quick-hitting projects that will preserve the life of the existing pavement, consistent with our pavement preservation program. So it will allow us to go further in between restoration projects off of the interstate system.”

The projects being moved ahead in the State Transportation Improvement Program are ones for which the need had previously been identified, but funding constraints had delayed them.

“We have very similar projects already in our program for the next two years running, where the funds will be used in the same fashion for prolonging the life of the pavement in ways that will be visible and will improve the driving conditions on the highways,” Cox said.

WYDOT uses an asset management system made up of pavement, bridge and safety management components to identify and prioritize necessary work. If the recommended rehabilitation can be completed in time, the need for reconstruction work that costs four to eight times more can be delayed.

“The revenues that are generated by the increase in the fuel tax were greatly needed by the department for construction projects,” Cox said, “We've been able to demonstrate on the ground and in ways that drivers will be able to see and feel as they drive on highways, that we're putting those funds to good use quickly.”