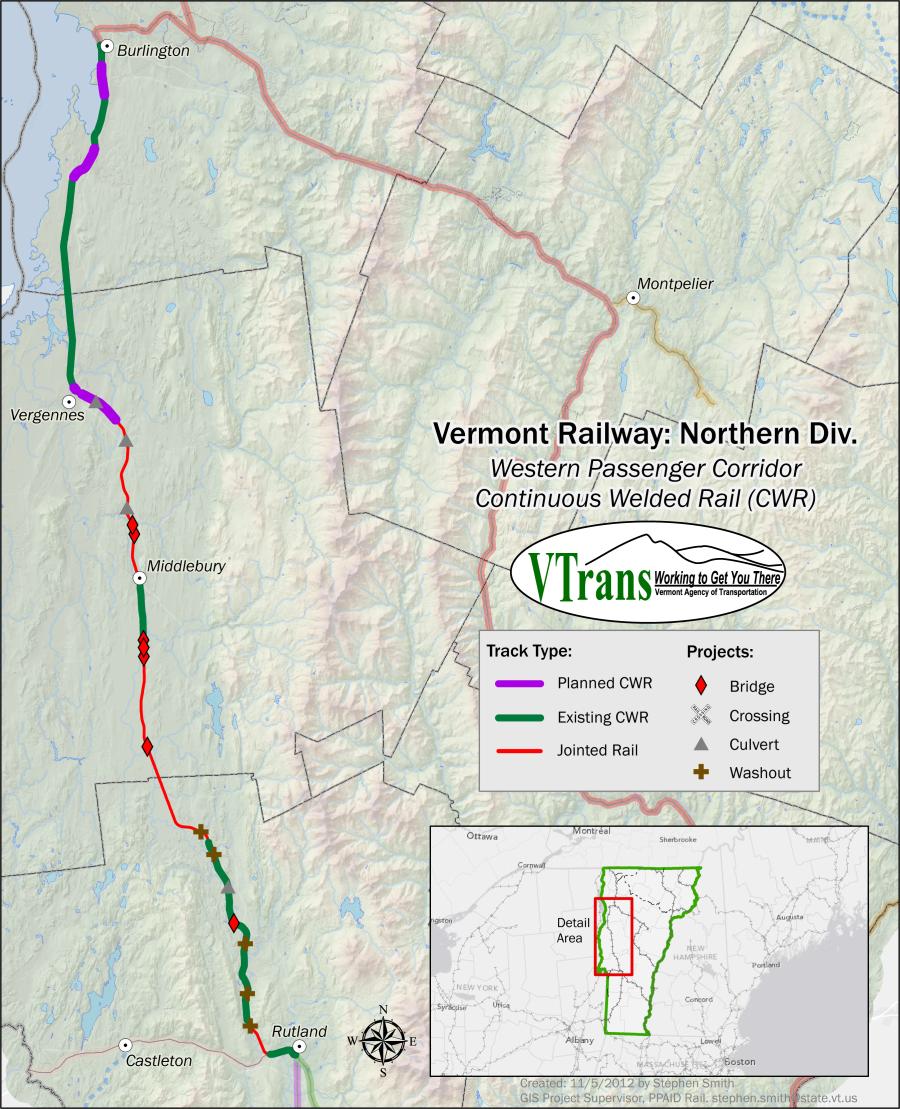 Due to $10 million in federal funding, passenger rail service should reach Burlington, Vermont's largest city, by 2020. In addition, the last sections of track between Burlington and Rutland, which is where passenger service currently stops, will be upgraded.

Improvements to the Western Rail Corridor, as the project is known, would provide a more direct train route from Vermont's largest population center in Chittenden County south to New York City.

State rail officials say the project will allow “Ethan Allen Express” passenger train service now terminating in Rutland to continue north to Burlington. This 65-mi. (104.6 km) stretch of rail from Rutland to Burlington is a “significant project,” but the project hasn't been let to bid yet.

It's a complicated calculation. The total project carries a price tag of $26 million. Federal funding of $10 million secured by Vermont's congressional delegation will be matched by approximately $11 million in state funding.

“Other federal money has been earmarked for western corridor updates,” Delabruere said.

Although the Tiger grant program is the federal source for much of the rail work, $13.3 million in federal highway money has been designated for rail crossings and another $2 million in federal money will be used for station improvements.

“The Tiger 5 project was $10 million in federal funds for the $13 million project to upgrade the rail,” Delabruere said. That project is “nearly done.” The Tiger 7 grant is the final piece to finish the track work.

Once the funding is in place, work will begin. The last phase of the project encompasses removing 11 mi. (17.7 km) of stick rail and replacing it with continuous welded rail. Welded track is required to meet Amtrak's standard for passenger trains traveling roughly 60 mi. (96.5 km) per hour, and although the goal of the project is to increase speeds on the bridges from the current 20 mph to 40 mph for freight and only 59 mph for passenger, Delabruere said the welded rail provides a smoother, safer ride because it is a heavier gauge and there are no joints. Stick rail, 105-lb. (47.6 kg) rail, has a joint every 39 ft. (11.9 m). Welded, 115-lb. (52.2 kg) rail, has no joints. The heavier rail will safely allow faster speeds, and because there are no joints, there is less maintenance.

Other components of the project include two bridge rehabs, three new station platforms for additional stops, additional switches for freight trains and five at-grade crossings with lights for safety. There also will be excavation work for the concrete platforms and signal work at the crossings.

Special equipment such as the Mark V will use lasers on the rail to lay out a design that keeps both gauge and the curves consistent.

There is already track there, Delabruere said. This is rehab. Even so, there are several components of the project: platforms, crossings, track and bridge. Amtrack won't start running until it's all built.

Anticipated to take four years to complete, the yet-to-let project is expected to pose many challenges.

“There are a lot of environmental laws and issues,” Delabruere said, “such as wetlands and stream alterations. The bridge rehab project needs permits.”

Weather is a factor in the schedule. As Delabruere said, there's “not a lot of work in the winter.”

But weather isn't the biggest impact on the schedule. Freight trains have to continue to run. With no detours, that means crews have to work around the train schedule.

“We have a short work window,” he said.

With “more night work than day,” work will have to be staggered around the trains. Because all the work is on one railroad and one project manager oversees everything, coordination of schedules and work windows is somewhat easier.

The 80-seat passenger train is not considered a commuter train. There are only two trains a day that travel from Vermont to New York City, and even after the rehab and the extension, the number of trains won't increase. “But efficiency will,” Delabruere said.

Nevertheless, this is an important development for western Vermont, which has no interstate highway.

“There's interstate only on the east side,” Delabruere explained. “People on the west side complain about transportation; they've been asking for this for a long time. Now they'll have service.”

According to Transportation Secretary Chris Cole, 107,000 passengers rode either the Vermonter or the Ethan Allen Express trains in Vermont at last year. That's an increase of 7 percent over the year before. Delabruere expects the numbers to grow with service into downtown Burlington.

Those riders journeying the short distance from Burlington to Rutland and Albany will save time with this more direct Ethan Allen route once it's complete, said Cole, but he believes it will be quicker than the state's other Amtrack train.

Formerly known as the “Montrealer” train, the Vermonter started turning around in St. Albans, Vt., in 1995 — thus, the name change. State leaders are eager to see this service restored to the north, with faster service to downtown Montreal. In anticipation of restored service, government officials are already negotiating with the Canadian government on a protocol to screen passengers in Montreal in order to reduce customs delays at the border.

Vermont has always been very supportive of trains, Delabruere said. “In 1964, the Vermont Railway was going out of business, so the state bought it. Vermont was the first state to do so. It became a public-private partnership.”

These days, the green mountain state supports two Amtrack lines: Ethan Allen and the Vermonter. Extending the Ethan Allen line to Burlington is predicted to boost the economy along that side of the state.

Cole believes that faster speeds and improved track will make Amtrack competitive with the automobile and potentially be a better way to get to downtown Manhattan than flying into JFK.

“Trains are the wave of the future,” Delabruere agreed. “Our highways are aging, congested and aren't getting any bigger. The same is true for airports.” He said the rest of the country could learn from what Vermont is doing with this project.