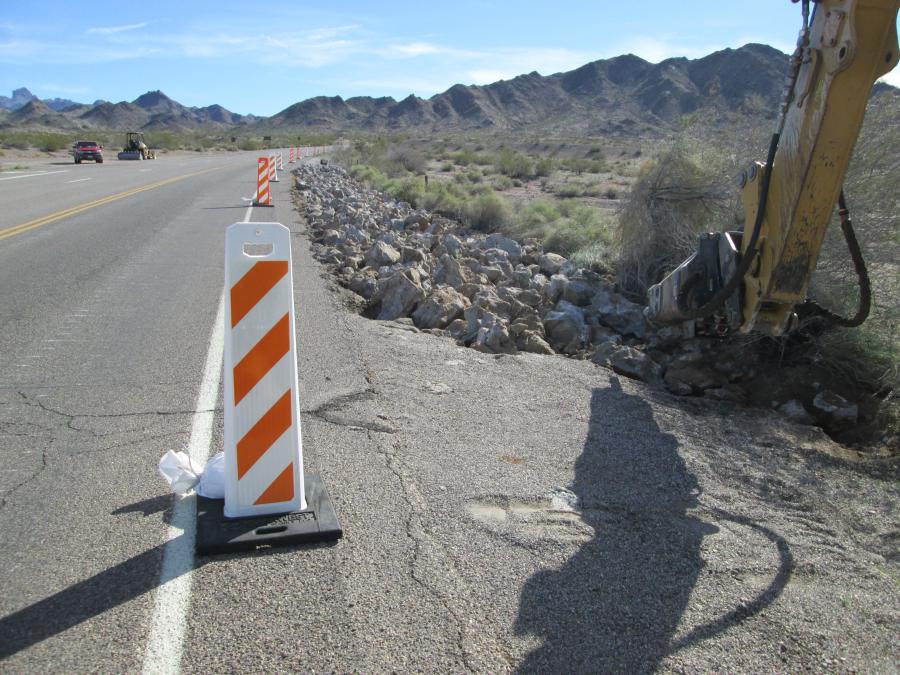 Dave Schneider, Yeh and Associates Inc. photo. The roadways will be reconstructed from the base to the surface and will be widened to 12-ft. (3.7 m) lanes with 2-ft. (.6 m) shoulders.

The plan is to provide wider, smoother roads for an increasing number guests seeking recreation in the area.

Lake Mohave is a reservoir formed by Davis Dam on the Colorado River, which defines the border between Nevada and Arizona. The lake lies at an elevation of 647 ft. (197 m) near Laughlin, Nev.

The Lake starts at the Hoover Dam on the Colorado River and runs to the Davis Dam. The lake and adjacent lands forming its shoreline are part of the Lake Mead National Recreation Area administered by the U.S. National Park Service.

Lake Mohave encompasses 28,260 acres of water. Activities at the lake include boating, fishing, kayaking and canoeing.

SWP Contracting was selected as the low bidder for the project.

The Federal Highways Administration, Central Federal Lands Highway Division based in Denver, is managing the project for the National Park Service.

The primary subcontractor for the work is FNF Construction of Tempe, Ariz.

Work will be conducted seven days a week.

“This project is complex and to minimize the impact on park visitors during the busy summer season weekend work is necessary,” said Bruce Nyhuis, chief, park maintenance and engineering division, Lake Mead National Recreation Area. “The contractor will be working essentially from dawn to dusk to accelerate the schedule.”

Completion date had originally been set for May 31, but is now expected in mid-June.

SWP Contracting and Paving is installing and maintaining erosion control devices, pulverizing asphalt in the primary parking lots and a service road, removing damaged concrete, grading for new handicap parking stalls and starting to clear and grub the road widening areas. The contractor also is marking the locations of underground utilities.

Nyhuis pointed out that the existing roads were in poor condition and well past service life, even with regular chip seal pavement preservation.

“Similarly, the parking lots also were in poor condition,” he said.

Also use of the roads has increased as more people visit the recreation areas and its lakes.

In 2015, the park welcomed 7.5 million visitors, which was a 5 percent increase compared to 2014. About 1.3 million people visited Katherine Landing last year.

An additional lane will be added from the entrance station to Cabin Site Road. The project also will include some drainage improvement and reconstruction of parking lots.

Approximately 40,000 cu. yds. (30,582 cu m) of dirt will be moved to make way for wider roads. All of the asphalt from the existing roads and parking lots will be pulverized and reused on the project.

The roads will remain open during construction, but visitors may experience delays lasting as much as 15 minutes.

Funding for the project was provided by Federal Lands Transportation Program.

“Lake Mead National Recreation Area is very important to surrounding communities,” Vanover said. “In 2014, visitors spent around $290 million in gateway cities, supporting nearly 4,000 local jobs. It is possible that road improvements may attract more visitors, but more importantly, it will improve the experience that the area's 1.3 million visitors have when they visit Lake Mohave.”

“One of the biggest challenges of the project is to minimize the impact to park visitors in a very busy, congested area while working on the roadway,” Nyhuis said. “The contractor prepared a traffic control plan that will be continually updated to improve the efficiency of the operations. Weekly progress meetings will be conducted to communicate any issues that arise.”

Nyhuis said another challenge is a wash that parallels Katherine Spur Road for a short distance. It requires a mechanically stabilized earth wall.

Mechanically stabilized earth is soil constructed with artificial reinforcing including materials like steel and geo-synthetics.

“This is a narrow part of the roadway and will again be a difficult area for traffic control,” Nyhuis said.