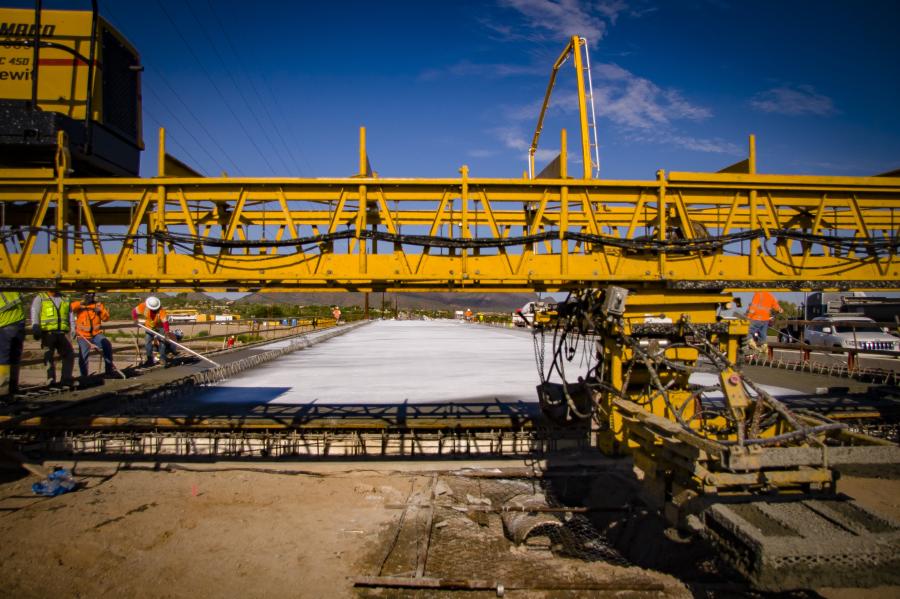 Crews recently poured concrete to create a deck for the first of two new bridges carrying Ina Road over the Santa Cruz River just west of I-10. (Arizona DOT photo)

Six months in, signs of progress abound at an Arizona Department of Transportation project creating a modern traffic interchange at Ina Road and Interstate 10 and more efficient traffic flow through a growing area.

Crews recently poured concrete to create a deck for the first of two new bridges carrying Ina Road over the Santa Cruz River just west of I-10.

With supports in place on the west side of I-10, drivers soon will see the first girders set for a bridge that will carry Ina Road over Interstate 10 and the Union Pacific Railroad tracks. The former interchange configuration had local traffic passing under I-10 and waiting as several dozen trains crossed Ina Road each day.

“Those are important milestones in this project,” said Dan Casmer, ADOT's resident engineer for the project. “Our teams have done a great job staying on schedule despite the extreme heat earlier this summer and the heavy monsoon rains.”

Beginning in early 2018, crews will move to the east side of the freeway. They will remove the remaining I-10 bridge, create new freeway lanes and a new frontage road and complete the Ina Road bridge. Drivers already can see rebar towers that will become bridge supports on the east side of I-10.

At the same time, crews will move traffic to the new bridge over the Santa Cruz River, remove the existing bridge and build a new one in its place.

When work is complete in early 2019, both I-10 and Ina Road will be wider to handle increasing traffic in the area, capacity on the Santa Cruz River bridges will double and drivers no longer will have to wait for trains that run east of I-10.

ADOT is overseeing the $128 million project, which is funded by the Federal Highway Administration, the Pima Association of Governments and the Regional Transportation Authority. The town of Marana is contributing $7.9 million toward the cost of the new bridges over the Santa Cruz River west of I-10.

Ina Road is closed at I-10, but ADOT will continue to maintain access to area businesses throughout the project.