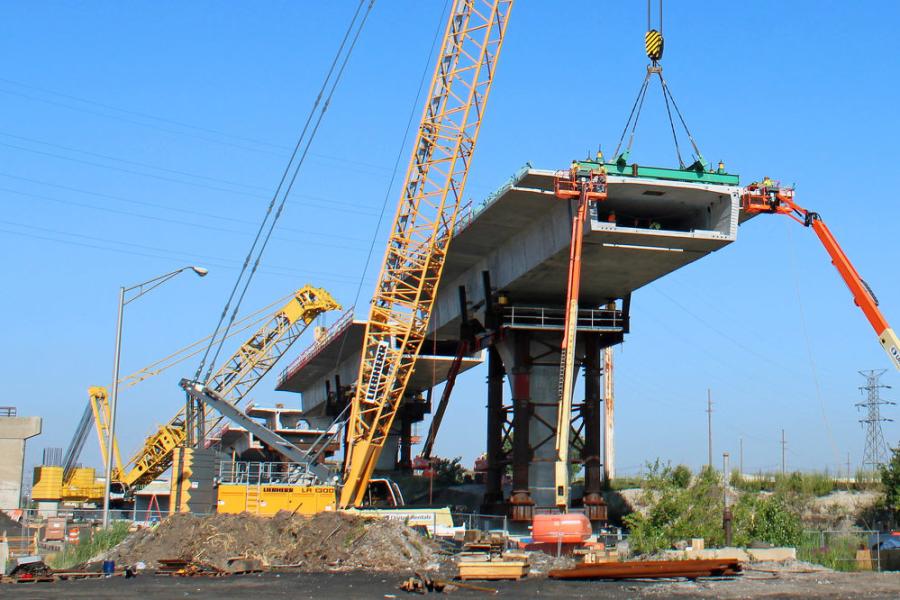 The 6,200-ft. bridge will stand at the same height above Indiana Harbor and Ship Canal as the original bridge, with 9-ft. shoulders on each side, and a 12-ft. lane of traffic in every direction. (Cline Avenue Bridge photo)

Designed to serve as an elegant landmark, the new Cline Avenue Bridge in East Chicago, Ind., will alleviate traffic congestion and enhance transport connectivity in northwestern Indiana when it opens in 2020. The 6,200-ft. bridge will stand at the same height above Indiana Harbor and Ship Canal as the original bridge, with 9-ft. shoulders on each side, and a 12-ft. lane of traffic in every direction.

"This project has been an integral part of East Chicago's and Lake County's economic and commercial growth," said Terry Velligan, general manager of operations at Cline Avenue Bridge. "The new bridge has been long anticipated to be reconstructed as The Gateway of Lake County. Many people in Lake County rely on the Cline Avenue Bridge for fast, safe and efficient travel for their daily lives." 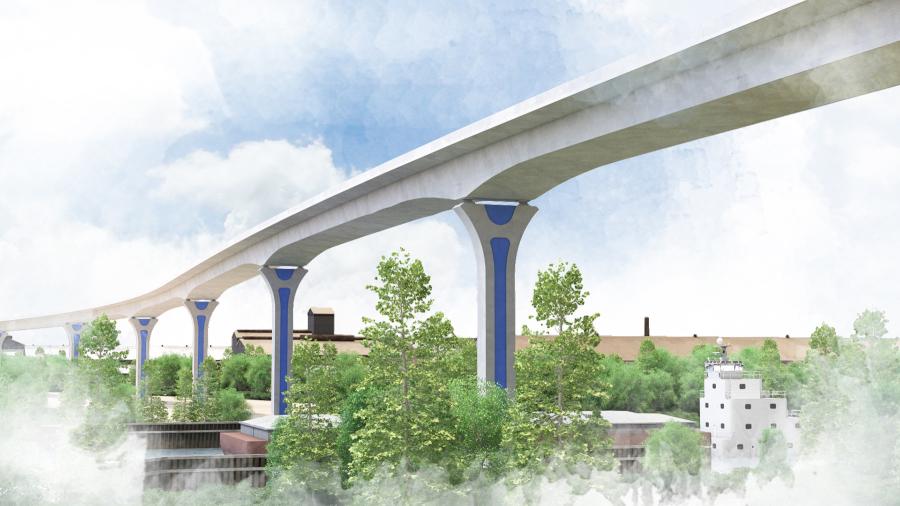 Work on the privately funded $150 million project began in 2017. The bridge will serve daily commuters traveling to and from work, vacationers coming from Chicago, interstate freight traffic and individuals visiting attractions around the southern tip of Lake Michigan.

"The Cline Avenue Bridge is perfectly situated in the northernmost part of Lake County that connects Indiana to Illinois," said Velligan. "Cline Avenue serves East Chicago, Hammond, Whiting and Gary, home to some of the largest industries in the state, such as BP, Arcelor Mittal Steel and US Steel."

The bridge is part of SR 912 and connects to one of the most traveled highways in the nation, the stretch of Interstate 80/94 known as the Borman Expressway. With 50 percent of all truck traffic in the nation passing through Chicago along the Borman, Cline Avenue offers a more direct route to Chicago than the Borman. The bridge also is a designated trucking route, allowing heavy industry trucking to bypass intercity streets, which alleviates congestion and reestablishes transport connectivity.

United Bridge Partners (UBP), a private infrastructure company that finances, designs, builds, owns and operates private toll bridges across the United States, serves as project owner. According to UBP's official website, the original Cline Avenue Bridge was closed and condemned in 2009, due to its structure being weakened by corrosion after 26 years of service. 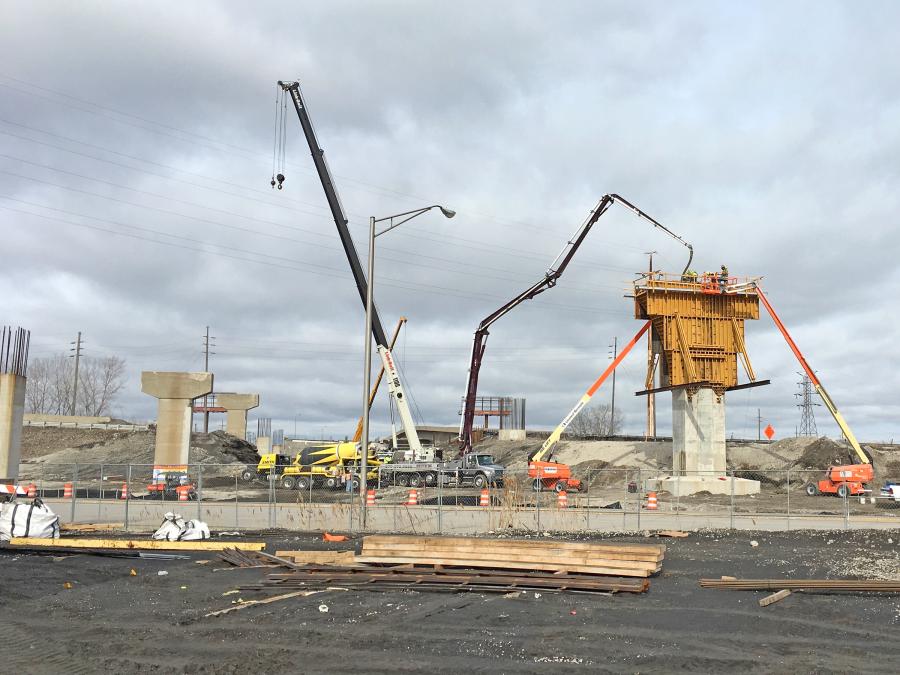 Based on research, officials anticipate 10,000 vehicles per day, or 3.65 million per year, will travel the Cline Avenue Bridge. The Average Daily Traffic (ADT) counts are expected to continue to grow, as the bridge can accommodate well above 10,000 vehicles.

Despite the amount of work and time involved, Velligan said rebuilding the bridge is a worthwhile effort.

"Lake County, Indiana, has experienced increased economic and residential growth in recent years, and is projected to continue growing. Now is a good time to build Cline Avenue Bridge, since it will help alleviate the traffic congestion that accompanied the growth. The bridge is fulfilling the need for a safer, more efficient and more direct route into and out of Lake County.

"The Cline Avenue Bridge also is making it more enticing for companies to establish roots in Lake County, since it provides employees with shorter commute times and access to the affordable housing in Lake County. There's the added advantage of being so close to all the amenities that Lake Michigan has to offer."

The highly anticipated project is 100 percent privately funded and uses no city, county, state or federal dollars. A groundbreaking took place in May, 2016, with completion of the project scheduled sometime next year.

The elevated section of the new bridge is well over one mile in length, at 6,236 ft. long, with the exception of the existing steel viaduct on the east side. The vertical clearance is the same as the previous bridge, at 100 ft., due to Coast Guard regulations. It will travel the same path and approximate length as the original structure. The previous bridge was four lanes wide, while the new one will have two general purpose lanes, one in each direction, with shoulders. 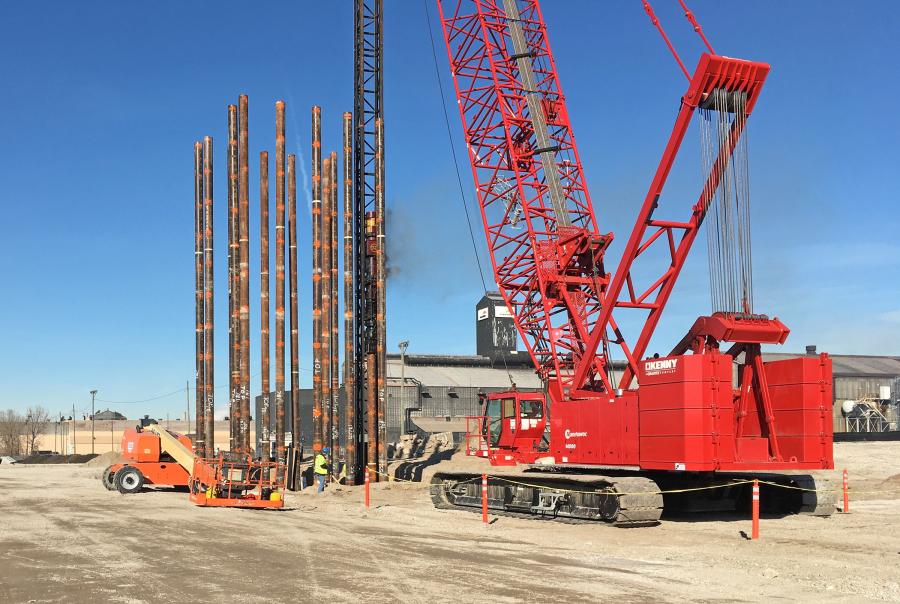 Challenges on the project include coordinating work with affected railroads and utilities, and battling northwest Indiana weather conditions. Crews have worked through wind, rain and cold, with the chilliest day on record registering -18 degrees Fahrenheit.

The foundations and substructure are complete, as is superstructure segment fabrication. Superstructure erection is well under way, with existing steel bridge preservation work already finished.

A total of 29 piers and footings were cast-in-place concrete and founded on 16-in. diameter steel piles. The previous bridge had been completely demolished and removed, with the exception of the below-grade foundations. Some of the existing concrete bridge piers and roadway exit/access ramps are still in place on the west side adjacent to Riley Road.

Earthwork was performed to prepare the site for the precasting operations and superstructure segment erection. Multiple power lines were relocated underground and de-energized for superstructure erection.

The work currently being performed focuses on superstructure erection. In addition, mill and overlay work is taking place on the final approach where the new bridge ties into the existing SR 912 roadway at both the east and west ends. Construction milestones include pier and footing construction, segment precasting, superstructure erection, rehabilitation of existing steel bridge section and SR 912 roadway approach rehabilitation. 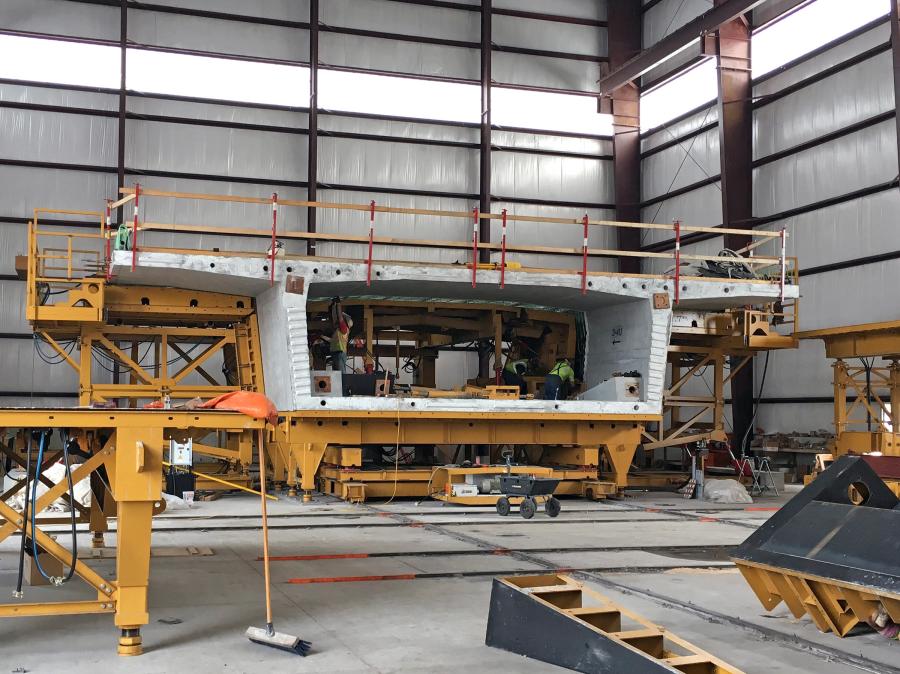 Velligan said the concerns for rebuilding a bridge are the same as building a new one.

"The project was designed in accordance with state and federal regulations. The objective is to use efficient design and construction materials and techniques that result in a durable, long-life and low maintenance structure that minimizes cost and time, while maintaining the highest standards of safety and quality."

"We erected a 24,600 square-foot building as means and methods to complete casting for the 685 segments required for the project. The benefit of constructing a building is that we're able to cast throughout all four building seasons, meeting all the required design and quality standards for each individual casted segment, as well as reducing transportation, labor and material costs.

"The 685 segments that will comprise the superstructure weigh between 60 and 100 tons each. They are rolled on pallets in our casting facility and transported around the site and storage yard on a straddle carrier. Segments vary from nine to 14 feet tall."

The construction schedule was condensed by performing substructure installation at the same time as superstructure segment precasting. Then, with a backlog of segments, rapid superstructure erection is performed. 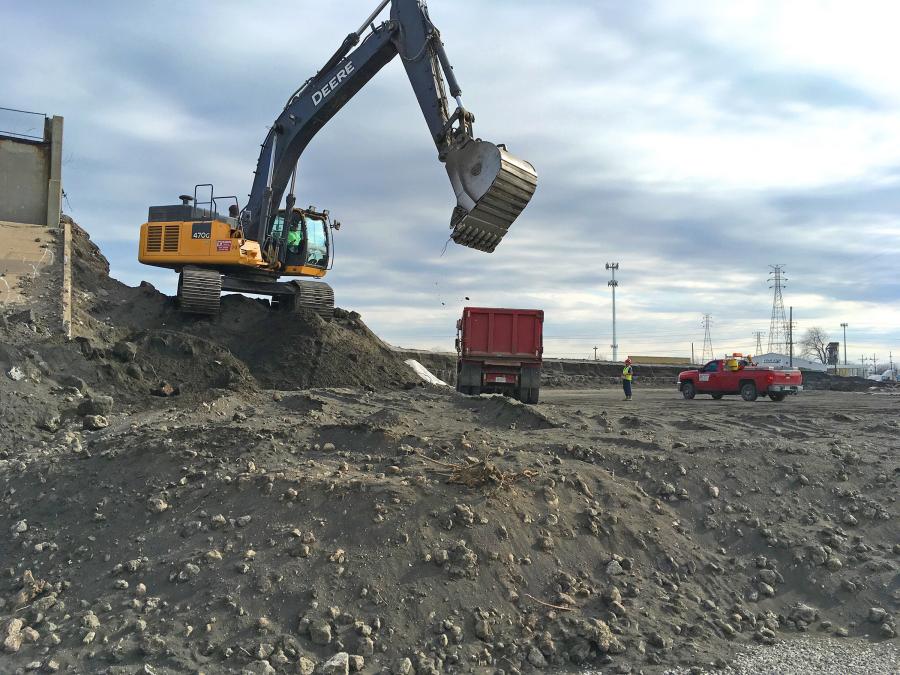 Although the work is not yet complete, Velligan said the new bridge is worth the wait, as it fulfills a need for the city of East Chicago and surrounding communities.

"As a resident of East Chicago, it's very rewarding to see work well under way, especially given that the Cline Avenue Bridge has been out of commission for the last ten years, and the need for connectivity has remained constant.

"When we hear from Lake County residents how much they relied on the Cline Avenue Bridge and how it enhanced their lives, we realize that this project has the ability to positively impact so many people."

He added, "Given the rich history of Lake County and its role in the industrial revolution with its steel mills, petroleum companies and immigration growth over the last 100 years, this project is more than just constructing a bridge. "It's woven into the fabric of people's lives." CEG