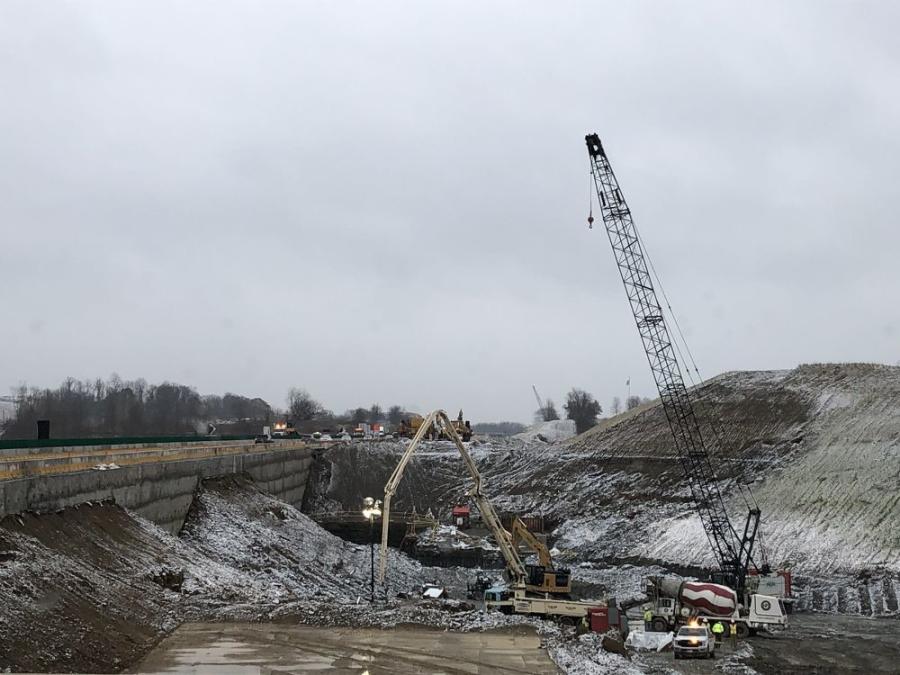 Seen here is the I-79 Bridge pier footer concrete placement.

The Pennsylvania Turnpike Commission is currently heading up an interchange project in Allegheny and Washington counties.

PA Turnpike 576, Section 55C2-1 is a project that extends from approximately 1 mi. west of I-79 in Allegheny County through an interchange connecting PA Turnpike 576 with I-79 and ends at Morganza Road just north of Cecil-Henderson Road in Washington County. 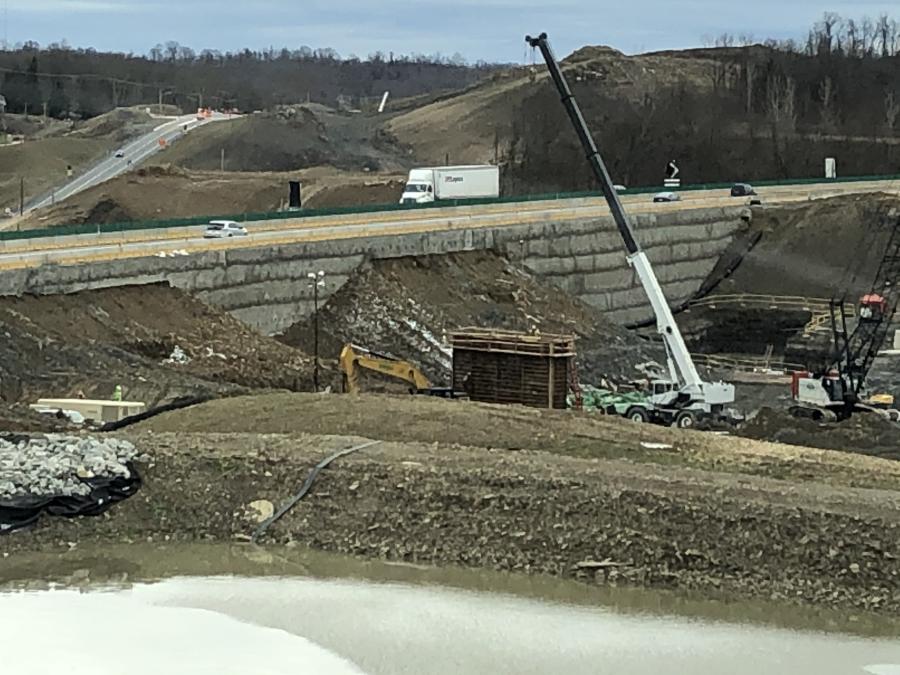 When complete, there will be three southbound I-79 lanes from Alpine Road to the Southpointe Interchange and there will be a free-flow interchange between I-79 and PA Turnpike 576. (which is the I-79/Toll576 interchange).

The contract was awarded in February 2019, with notice to proceed given on Feb. 4, 2019. The completion date is set for June 24, 2022. Northbound to westbound and eastbound to southbound movements of traffic will be in place in the fall of 2021.

The full dollar amount of the project is $174.3 million. 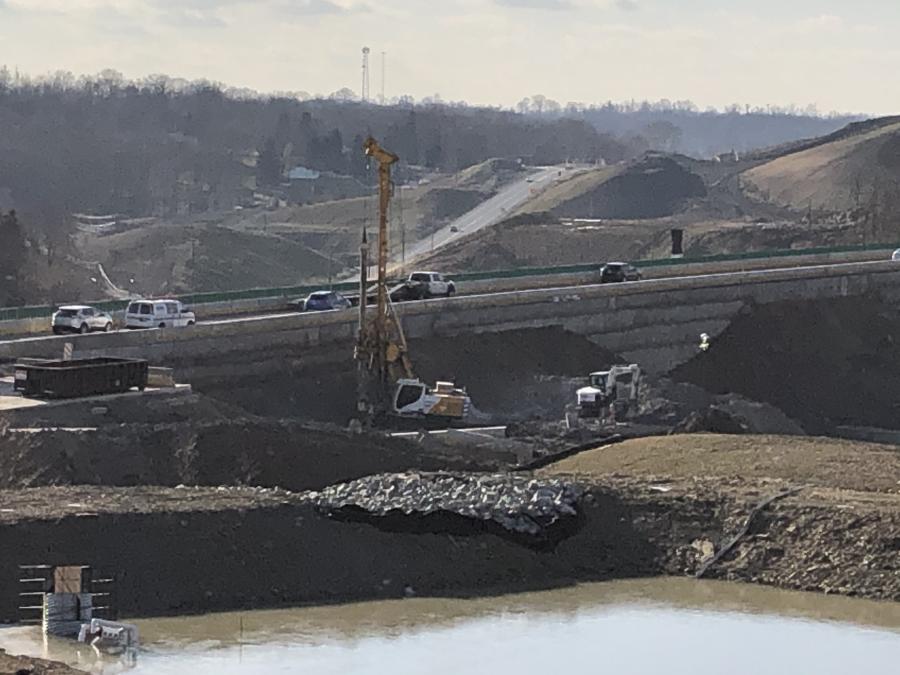 "There are various challenges associated with a project of this scale," said Renee Vid Colborn, public information manager/west of the PA Turnpike Commission. "One of the primary ones is performing complex and large-scale construction with a four-lane interstate highway running through the middle of the job site. The interstate separates the project into three primary work areas, west of 79, east of 79 and 79 itself. We have roughly three million cubic yards of earth that need to go from the east side to the west side while keeping traffic flowing. That is part of the reason that 576 will go under I-79, so that Cat 777 haul trucks can go under the highway hauling 100 tons of dirt and rock per load from one side of the job to the other."

Another challenge noted by Colburn is the proximity to the National Cemetery of the Alleghenies.

"This is an important landmark in this area and it is treated with the utmost respect as they bury up to 10 soldiers here daily," she said. "Making sure that they have continuous access and that information is provided to them on a regular basis is critical for family members coming to visit loved ones' memorials as well as funeral processionals to be able to navigate the area as smoothly as possible." 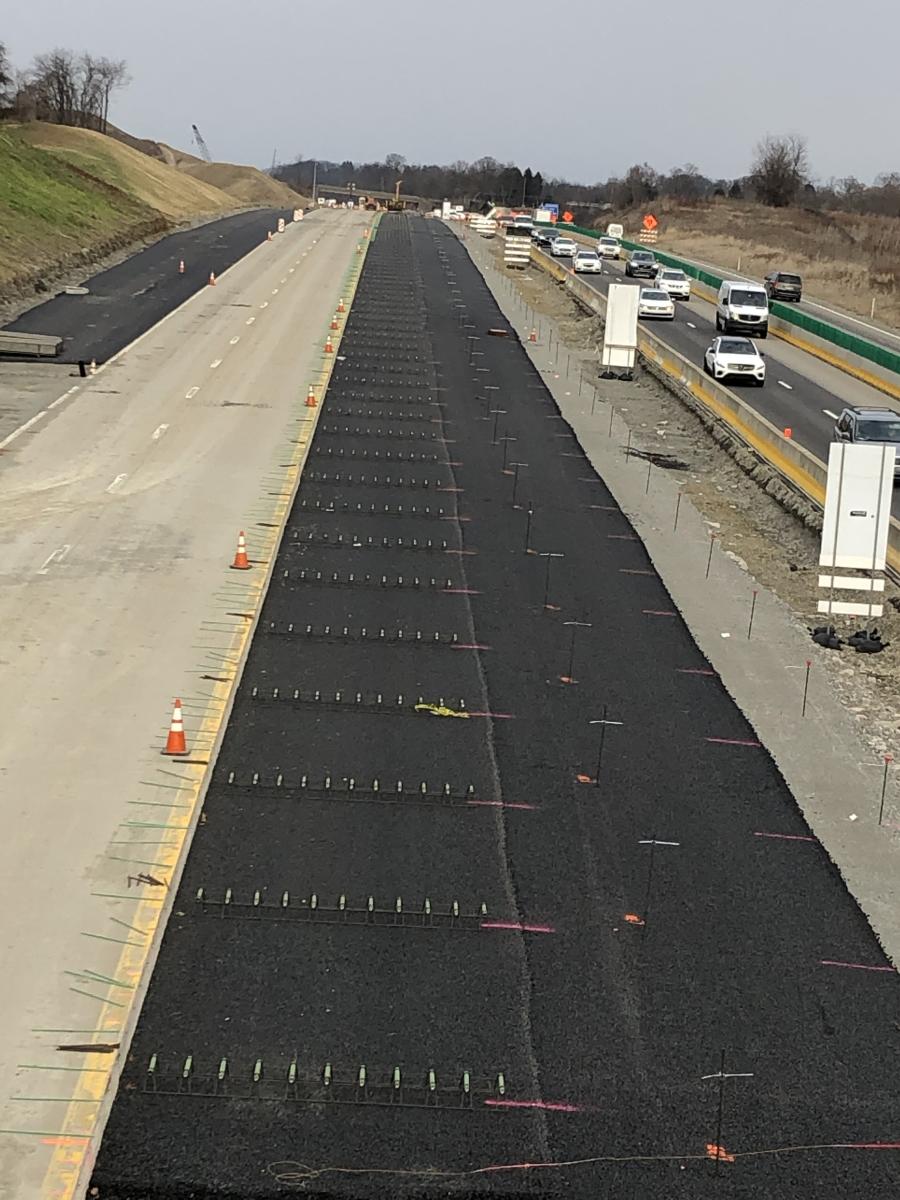 "To excavate to the depths that we are involves extensive removal of bedrock and that requires blasting" Colburn said. "Blasting is something that is fairly routine in this area, but it does require close coordination with neighbors as well as existing roadways and emergency services. There will be up to 60 blasts that will require temporary traffic slowdowns on I-79 to perform the blast and verify the road is clear prior to allowing traffic back through the work zone. This has already been done about 20 times to date without any complications."

Colburn noted that this project is the final section out of six major contracts that make up a 13-mi. stretch of brand new Turnpike roadway. It is also the section with the most complex interchange, so about 11 mi. of brand new road will be complete and waiting for this section to be completed in order to open to traffic.

"It requires coordination with PennDOT Districts 11 and 12 because the county line runs right through the middle of the project," Colburn said. "It involves widening of the existing interstate while constructing the new roadway and digging under the existing active interstate by shifting traffic and building new bridges."

Colburn reported that there are more than 70 subcontractors, fabricators and suppliers for the project, but Walsh is self-performing the vast majority of the major work. Wampum is performing blasting, Alvarez will be doing bridge girder erection, North Suburban is doing all erosion and sediment control work, Power Contracting is doing ITS work and Stone and Co. is supplying all concrete including an onsite batch plant.